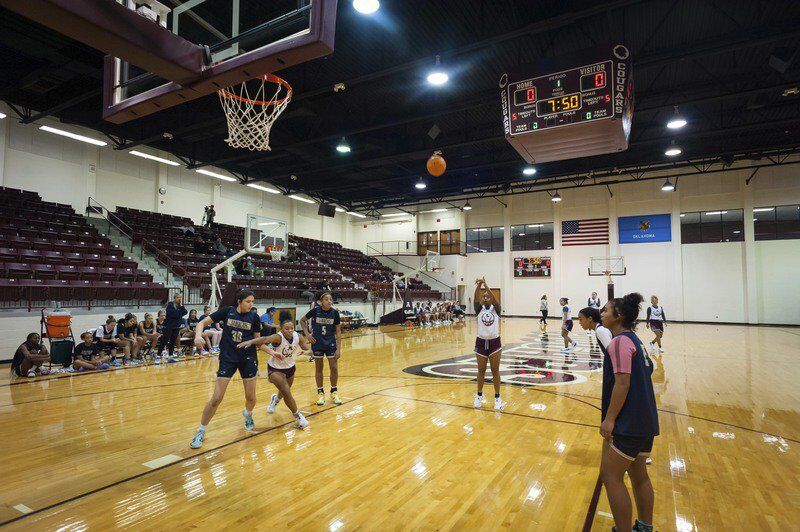 Ada’s Amaya Frizell shoots a free throw during a scrimmage with Southmoore Thursday inside the Cougar Activity Center. The Lady Cougars’ next scrimmage action is next Tuesday in Tulsa. 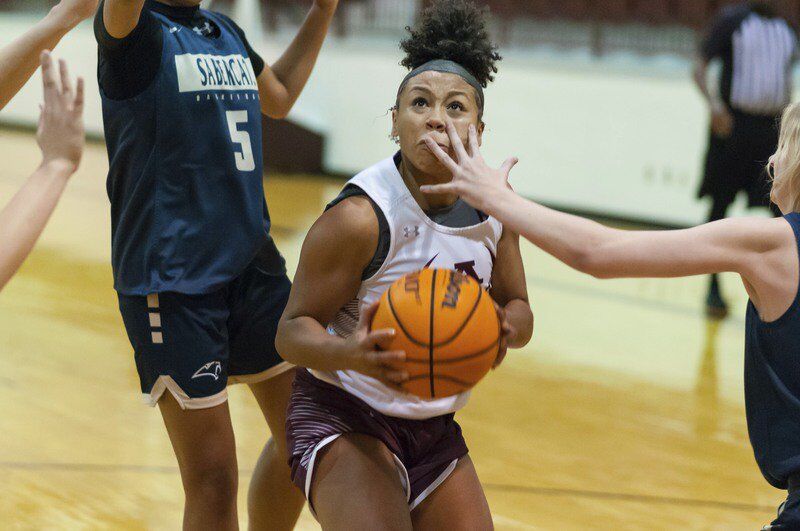 Ada freshman Sania Richardson gets slapped across the face by a Southmoore defender on her way to the basket during a scrimmage Thursday inside the Cougar Activity Center. 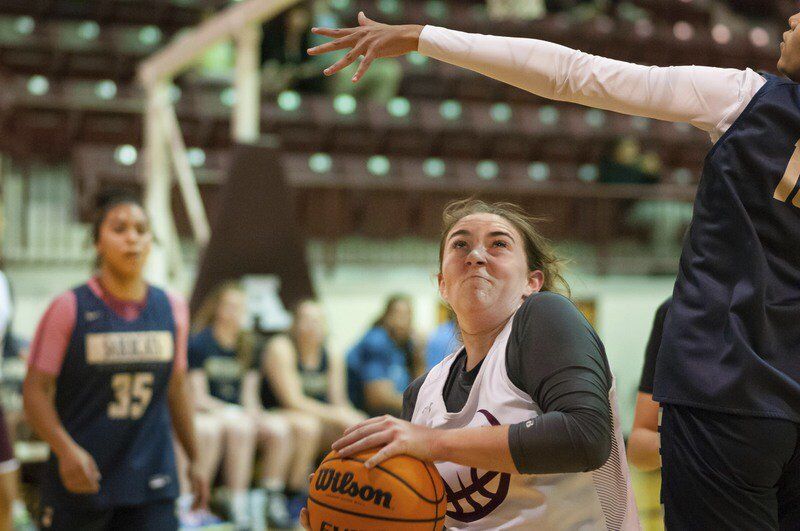 Ada post player Shayla Wofford makes a strong move to the basket Thursday evening during a home scrimmage against Class 6A Southmoore.

Ada’s Amaya Frizell shoots a free throw during a scrimmage with Southmoore Thursday inside the Cougar Activity Center. The Lady Cougars’ next scrimmage action is next Tuesday in Tulsa.

Ada freshman Sania Richardson gets slapped across the face by a Southmoore defender on her way to the basket during a scrimmage Thursday inside the Cougar Activity Center.

Ada post player Shayla Wofford makes a strong move to the basket Thursday evening during a home scrimmage against Class 6A Southmoore.

The Ada High School girls basketball team battled Class 6A Southmoore for six quarters during a scrimmage Thursday evening inside the Cougar Activity Center and head coach Christie Jennings felt like her squad was better for it.

There are really no winners or losers in scrimmages, but Southmoore won the six quarters by a count of 64-55. Take out two all-JV frames and the Lady SabreCats got the best of Ada 48-41.

“I thought we started the game really tight. Shots weren’t going in. We struggled to make free throws and missed a few bumps, but I thought we competed our butts off,” said Ada head coach Christie Jennings. “We definitely got better today.”

After the first two 10-minute quarters (with a running clock until the final minute) that featured varsity players, Ada trailed just 20-18. Southmoore edged the Lady Cougars 16-13 in the third varsity quarter and won the final varsity quarter 12-10. The Lady SaberCats won two JV quarters by a combined 16-14 count.

The Lady Cougars went toe-to-toe with a team Jennings believes will make some noise in Class 6A this season, especially with the addition of sister move-ins (from Norman) Zya Vann and Talia Vann.

“With the addition of a couple of new players, I think Southmoore will be really good this year. When you play great competition and you can compete with them every quarter, you improve. That’s what we did today,” Jennings said.

The Lady Cougars got off to a slow start in the first quarter and didn’t hit a field goal until Shayla Wofford broke the ice at the 2:15 mark of the first 10-minute session. Still, thanks to some solid defense, Ada trailed just 6-4 at that point.

Amaya Frizell buried a 3-pointer at the 1:15 mark to get Ada within 8-7, but the Lady Cougars couldn’t quite get over the first-quarter hump.

Southmoore led 6-3 before Ada used scored five points in the final seconds to win the quarter.

Carizma Nelson knocked down a 3-pointer with 40 seconds left and Sania Richardson made two free throws with 8.5 ticks remaining to put Ada ahead.

This quarter was the Zya Vann show. She scored 10 of her team’s 16 points, mostly on athletic drives to the basket.

Two Richardson free throws at the 2:46 mark got Ada within 12-11 after Southmoore had taken a 10-3 lead in the first three minutes.

But Vann scored on a putback and Jenna Mcmanus hit two free shots with 45 seconds left to hold off the Lady Cougars.

Ada’s Carizma Nelson suffered a hyperextended knee in this quarter and was scheduled to get the injury re-evaluated on Friday.

Sophomore Rylynn Truett scored five straight points — hitting a 3-pointer and knocking down a baseline jumper — that put Ada ahead 10-4 with 3:33 to play.

However, the Lady Cougars went on a dry spell and didn’t score again in the frame. Southmoore took advantage and ended that period with an 8-0 run — including a steal and layup by Jessica Mcmanus with 15.2 seconds left that proved to be the difference.

Amaya Frizell and Rylynn Truett scored 10 points each to lead the Ada offense. Richardson scored nine points for Ada, while Makaviya Nelson hit a pair of 3-pointers for six points.

The Lady Cougars hit 11-of-17 free throws in the contest, including a 4-for-4 effort by Jakobi Williams.

Zya Vann led all scorers with 16 points for the Lady SaberCats.

Ada’s next scrimmage is planned for Nov. 23 at the PWP Facility in Tulsa. The Lady Cougars will face Inola and Jay in that event.