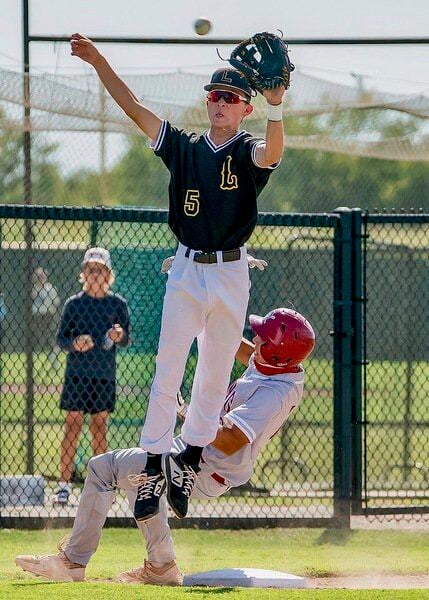 Kaleb Goodwin of Latta (5) and his Ada Braves teammates travel to Lawton this weekend to compete in the Cameron Showdown. 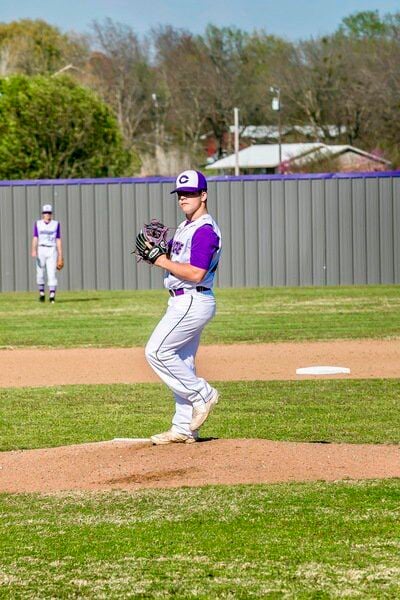 Jody Trevathan of Coalgate hit a home run for the Ada Braves in a 10-0 win over Sandlot Ramos Sunday at the Connors State June Showcase in Warner.

Kaleb Goodwin of Latta (5) and his Ada Braves teammates travel to Lawton this weekend to compete in the Cameron Showdown.

Jody Trevathan of Coalgate hit a home run for the Ada Braves in a 10-0 win over Sandlot Ramos Sunday at the Connors State June Showcase in Warner.

WARNER — The Ada Braves started their weekend with a win and ended it with another impressive victory.

In between, the Post 72 club dropped a pair of contests at the Conners State June Showcase in Warner.

The Braves defeated a talented Oklahoma Drillers club 6-3 to get the showcase started before dropping a tough 7-6 decision to Branditos 17U in Friday’s late game.

On Saturday, Risin 22 shut out the Braves 7-0 before the locals finished strong with a 10-0 victory over Sandlot Ramos 17U on Sunday.

“We lost a tough one Friday night, but our guys never quit competing though. We had some guys step up on the mound and at the plate in big spots for us,” said Ada Braves assistant coach Dillon Atkinson.

The Braves are now 6-2 on the summer and travel to Lawton this weekend for the Cameron Showdown which begins Friday and runs through Sunday.

The Post 72 club trailed 2-1 after five innings but DJ Van Atten of Latta blasted a grand slam to highlight a five-run Ada outburst in the top of the sixth to put the locals ahead for good.

And it all happened with two outs.

Holden Lee of Latta got the Braves started by getting hit by a pitch. Carson Abbott of Latta followed with a single and Lee scored on a base hit by Tucker Brown of Moss that tied the game at 2-all.

Trenton Golden of Moss was then hit by a pitch to load the bases before Van Atten unloaded them in a hurry with his blast to left field.

The Braves managed just four hits in the contest by four different players. Abbott scored a pair of runs for Ada.

The Branditos scored a run in the bottom of the sixth to edge Ada in Friday’s late game.

The Braves had trailed 6-1 after four innings before erupting for five runs in the top of the fifth inning to tie the score at 6-6.

DJ Van Atten led the Post 72 offense, going 3-for-4 with three RBIs and two runs scored. He cracked a solo home run to lead off the fourth inning and tie the game at 1-1 and then hit a two-RBI double in Ada’s big fifth-inning rally.

Tucker Brown went 2-for-4 and knocked in a run for the Braves only other hits in the game.

Alex Woods of Ada started on the mound for the Braves. He struck out six, walked one and allowed just two earned runs in 3.0 innings.

Trenton Golden pitched well in defeat for the Braves. He struck out five, walked one and allowed just three hits and two earned runs in 4.0 innings.

Kason Pruitt and Jody Trevathan had both of Ada’s hits.

DJ Van Atten was dominant on the mound for the Post 72 club. He struck out nine, walked one and allowed just one hit — a single by Grady Kitchens with one out in the bottom of the second inning.

Tucker Brown led a nine-hit Ada offense, going 3-for-3 with a double, three RBIs and a run scored from the top of the lineup.

Van Atten helped his own cause, finishing 2-for-3 with two double and RBI and two runs scored. Jody Trevathan went 1-for-3 with a home run, two RBIs and a run scored. Trey Wilkinson of Coalgate finished 1-for-2 with two RBIs, a walk and two runs scored and Carson Abbott walked twice and scored a pair of runs.

“It’s just a great group to be a part of,” Atkinson said. “We’re excited to see their growth and development over the course of the summer.”