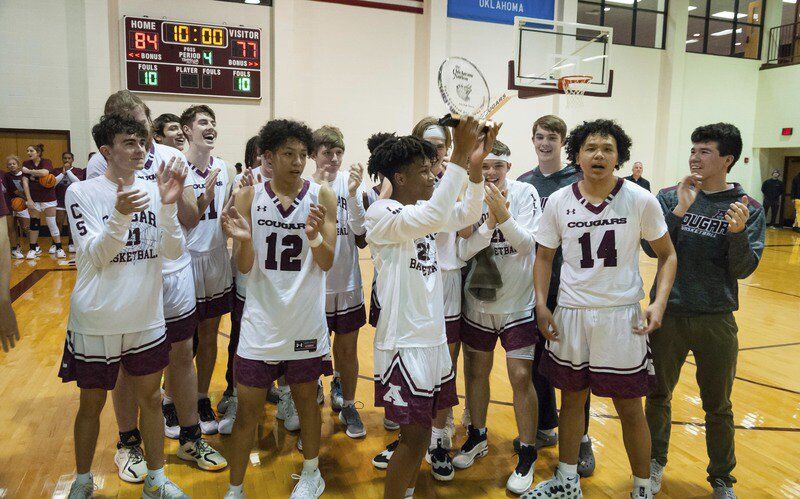 Ada’s Isaiah Walker holds up the third-place trophy after the Cougars rallied to defeat Class 6A Lawton 84-77 in an overtime thriller Saturday night at the East Central Oklahoma Classic inside the Cougar Activity Center. 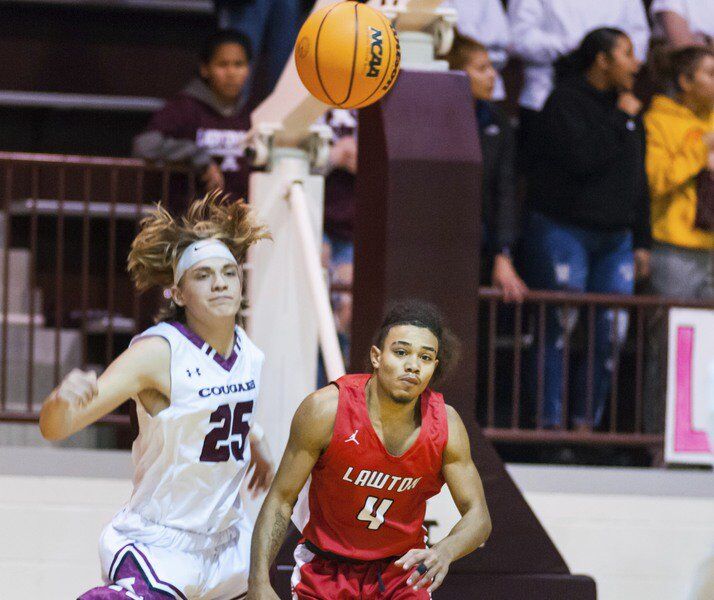 Ada’s George Maddox (25) passes the ball down the court with Lawton’s Devin Simpson (4) nearby during action in the third-place contest Saturday night at the East Central Oklahoma Classic. Ada won 84-77 in overtime. 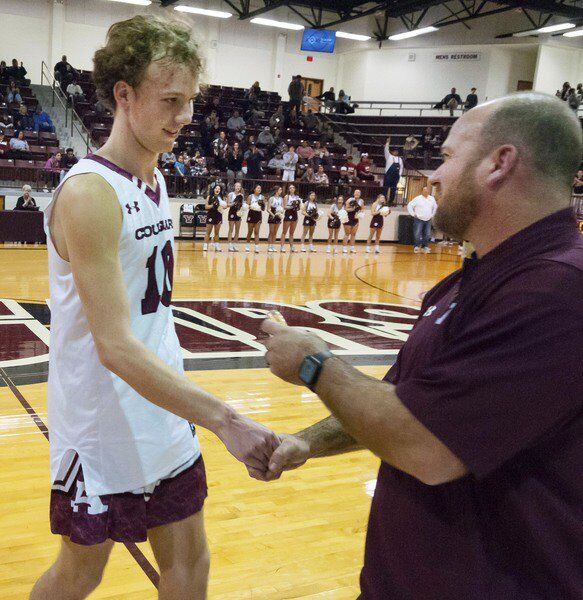 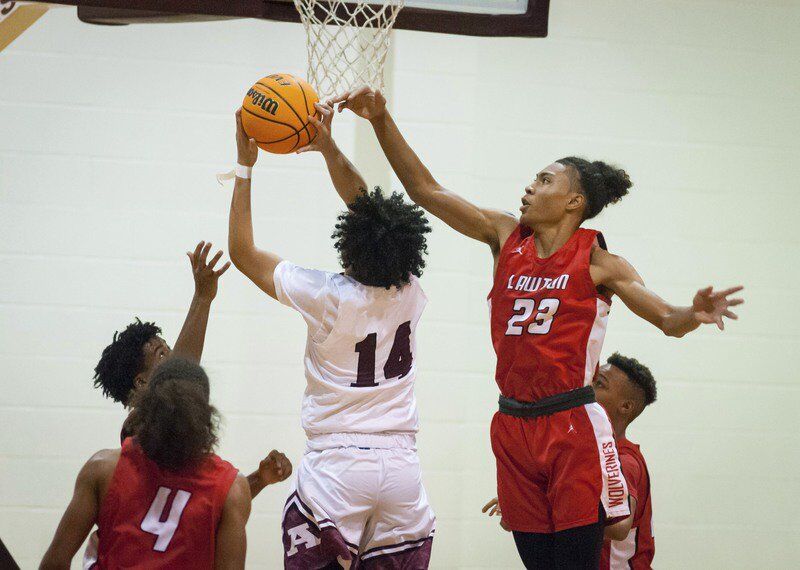 Ada’s Isaiah Walker holds up the third-place trophy after the Cougars rallied to defeat Class 6A Lawton 84-77 in an overtime thriller Saturday night at the East Central Oklahoma Classic inside the Cougar Activity Center.

Ada’s George Maddox (25) passes the ball down the court with Lawton’s Devin Simpson (4) nearby during action in the third-place contest Saturday night at the East Central Oklahoma Classic. Ada won 84-77 in overtime.

From all appearances, it looked like Ada’s goose was cooked midway through the third quarter of their third-place game against Class 6A foe Lawton Saturday night.

However, the Cougars engineered one of the most epic comebacks in ECOC history and stunned the Wolverines 84-77 in overtime much to the delight of the boisterous Ada faithful inside the Cougar Activity Center.

Coach Kyle Caufield’s club hoisted up the third-place trophy with a 6-5 record, while Lawton left town at 5-5.

The wild contest featured at least one Lawton fan being ejected, a technical foul on LHS head coach Cole Lehr, 63 total fouls, 72 free throws and an upset Lehr being forced to leave the court following the game.

On Friday, Ada also dug itself out of a sizable hole against old rival Ardmore, tied the game in the fourth quarter but couldn’t close the deal in a tough 56-50 loss to the Tigers.

“When you go to a tournament, you want to win all three but you definitely want to win two and we did that tonight,” Caufield told The Ada News. “Our kids were a little tired and heavy-legged, but these are the kind of games we need.”

The Cougars got themselves in a mess by committing 16 turnovers in the first 20 minutes of the game and surrendered what must have seen like 100 offensive rebounds to the cat-quick Wolverines.

Ada trailed 45-32 at halftime and then saw Lawton go on a 12-0 volley to start the third period. The run was capped by a steal and layup and two free throws by Lawton’s Tyron Amacker that put the Wolverines ahead 57-32 at the 5:26 mark of the third period.

The Cougars still trailed by 22 late in the third quarter but hit five consecutive free throws — four following the technical foul on Lehr.

Cooper Patterson hit the first free throw and then Camryn Reed hit two foul shots and two technical free throws and Ada had trimmed its deficit to 65-48 heading into the fourth period.

The Cougars still had a big hill to climb.

Ada went on a 15-3 surge early in the fourth period and when Jack Morris sank a pair of free throws at the 2:16 mark, the Lawton lead had shrunk to 68-63.

It was still Lawton’s game to lose at that point.

Omarionte Smith hit to clutch free throws for the Wolverines to put the visitors ahead 70-63 with just 2:07 left.

After Devon MacCollister sank a pair of free shots, he assisted on a basket by Reed with 1:32 remaining to get Ada within 70-67.

Things again looked dicey for Ada when Amacker stole the ball with 36.4 and hit one of two free throws to put Lawton on top 71-67.

MacCollister then took over down the stretch. He scored on a drive to the basket with 26.2 seconds left to get Ada within 71-69 and followed by stealing the ensuing inbounds pass by Lawton. MacCollister was fouled and hit two more free throws and the game was tied for the first time at 71-71.

After Amacker missed a good look at the other end, Moris grabbed the rebound and Ada called a timeout with 4.3 ticks left. The Cougars got the ball in the hands of MacCollister and he drove straight to the basket and was fouled with 2.3 seconds remaining. He hit the first of two free throws to give Ada its first lead of the game. However, after missing the second one he tried to hustle for the rebound and fouled Smith with just 1.4 seconds remaining.

Smith missed the first free throw but made the second to force the overtime period.

The Cougars outscored Lawton 24-7 in the fourth quarter.

It was all Ada in the extra session.

Morris scored six points in the first 1:17 of the overtime. He scored back-to-back baskets on a strong move to the rim and a point-blank shot after an assist from George Maddox. Morris then got a steal and made two free throws with 2:43 left to put Ada on top 79-72.

Zane Nelson scored on a drive to the hoop and was fouled with 40.9 seconds. He missed the free throw but still cut the LHS deficit to 80-77.

Oddly, Ada went 8-of-13 from the free-throw line in both the fourth quarter and in overtime. That 16-of-26 shooting — while not grand — was just good enough to help with the big rally.

“I told them going into the fourth quarter we have to put our head down, get to the rim and attack. We needed to get to the free-throw line and stop the clock,” Caufield said.

“We did a good job of settling down. Early we played at their pace and then we started to slow down and got ourselves back in the game. That’s also what we did last night (against Ardmore),” he continued. “They really pulled together. They leaned on each other and loved on each other. We tell them if they play as hard as they can we can live with the results. They never feel like they’re out of a game.”

MacCollister led all scorers with 26 points. He finished 5-of-6 from the field and 16-of-23 from the free-throw line. He also had three steals.

Morris followed with 24 points and went 8-of-14 from the field, including a pair of 3-pointers, and 6-of-8 from the free-throw stripe.

Reed finished with 21 points and hit 11-of-16 free throws and pulled down a team-best seven rebounds.

Even Ada athletic director and girls head coach Christie Jennings was in awe of the incredible comeback.

“It was unbelievable. Our boys play so hard and they always give themselves a chance to win,” she said. “Our fans were going nuts and of course there was drama on the Lawton bench. But all in all, our kids did a good job of keeping their composure, even when they were down by so much.”

As a team, Ada finished 33-of-50 from the charity stripe compared to a 15-of-25 showing by the Wolverines. Four LSH starters and one bench player fouled out.

Amaker paced Lawton with 19 points, nine rebounds and six steals. Devin Simpson was next with 15 points, including a trio of 3-pointers. Devarius Hardy also reached double figures for the LHS squad with 12 points to go with 10 rebounds.

The Tigers began the game on a 16-4 run capped by a steal and layup from Jordyn Brown at the 2:40 mark of the opening stanza.

Dion Brown’s 3-point basket at the 4:46 mark of the second period pushed the Ardmore advantage to 29-16. The Cougars had closed the gap to 35-26 at halftime.

After a conventional three-point play from Brown to start the third period, the Cougars trailed by a dozen.

However, Ada closed the third quarter with a 15-5 surge and after Devon MacCollister scored on a drive and then hit two late free throws to cap the run, the Cougars had managed to pull within 43-41 heading to the fourth frame.

The early portion of the final period featured three ties — the last at 47-47 when MacCollister drained a pair of free throws with 4:58 to play.

However, Ada wouldn’t score again until Jack Morris drilled a 3-pointer at the buzzer.

Morris finished with a double-double of 16 points and 10 rebounds for the Cougars. Camryn Reed also scored 16, including a pair of 3-pointers. MacCollister just hit double figures with 10 points and also had four rebounds and two steals.

DD Coleman scored 18 points and had seven rebounds and three steals. Dion Brown followed with 15 points on the strength of 5-of-12 shooting from 3-point range and had five boards and four steals. Jordyn Brown chipped in 14 points to the balanced Tiger attack.