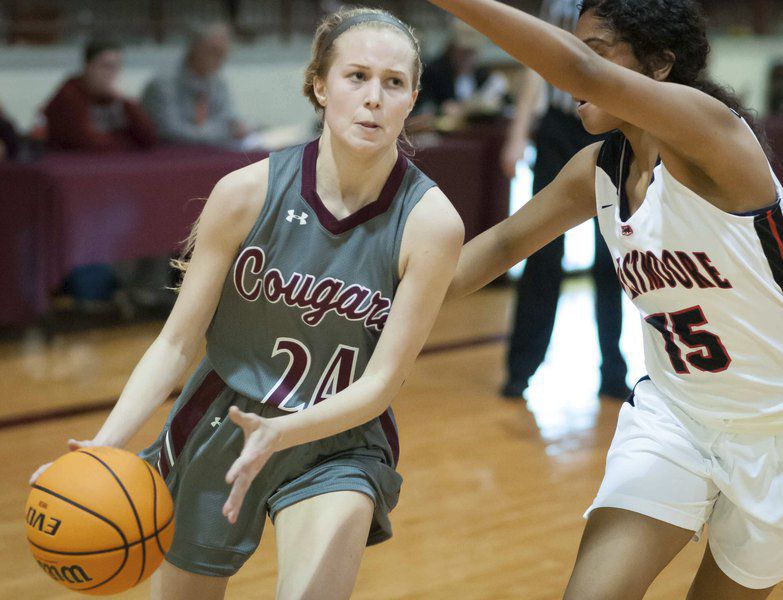 Ada’s Tatum Havens (24) tries to drive to the basket against Westmoore defender Jaiden Smith (15) during their matchup in the championship game of the 2020 East Central Oklahoma Classic Saturday night inside the Cougar Activity Center. 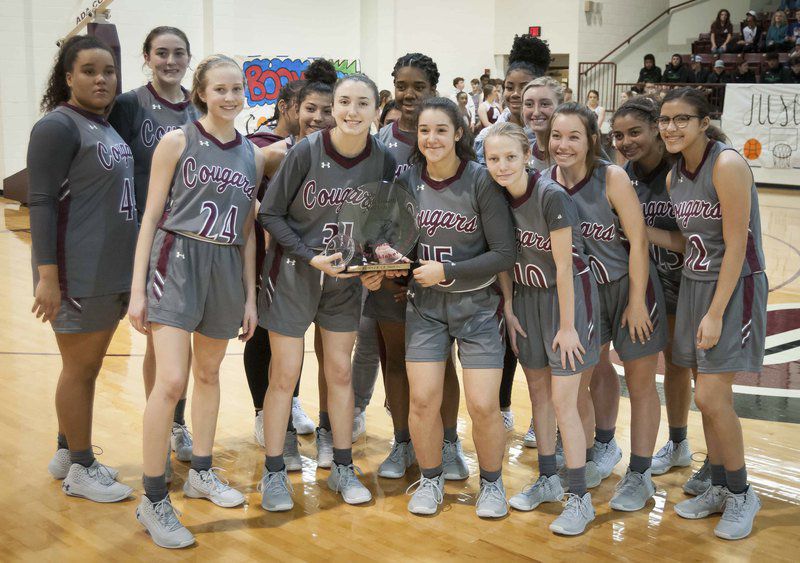 The Ada High School girls basketball team finished second at the 2020 East Central Oklahoma Classic. It was the first time the Lady Cougars had reached the ECOC finals since 2006, when they were also runners-up.

Ada’s Tatum Havens (24) tries to drive to the basket against Westmoore defender Jaiden Smith (15) during their matchup in the championship game of the 2020 East Central Oklahoma Classic Saturday night inside the Cougar Activity Center.

The Ada High School girls basketball team finished second at the 2020 East Central Oklahoma Classic. It was the first time the Lady Cougars had reached the ECOC finals since 2006, when they were also runners-up.

The Ada High girls basketball team was overwhelmed by a bigger, stronger Class 6A No. 19 Westmoore team during the first 13 minutes of their championship game Saturday night at the 2020 East Central Oklahoma Classic.

However, after that initial shock wore off, the Lady Cougars gave the Lady Jaguars everything they wanted before finally falling to Westmoore 56-47.

Westmoore, which had lost three straight games to ranked 6A teams Edmond Memorial, Deer Creek and Mustang entering the tournament, improved to 7-5. Ada, ranked No. 15 in Class 4A, dropped to 9-3. It was the first time the Ada girls had reached the ECOC finals since 2006. They were also runners-up that year.

Westmoore pushed Ada around in the early going and when Tahtyana Jackson scored on a fast break with just over three minutes left in the second quarter, the Lady Cougars found themselves trailing by what seemed at the time to be an insurmountable 25-8 score.

The Lady Cougars then bowed up to Westmoore and went on a 23-5 run of their own to get right back in the contest. Some of the highlights of that sure included: a three-point play and an 18-footer at the second-quarter buzzer by Landyn Owens that helped get the Cougars within 27-18 at halftime; a 3-point basket by Amaya Frizell with just under five minutes left in the third quarter that made it 29-25; and three free throws by Tatum Havens, who was fouled on a 3-point attempt, at the 4:31 mark of the third period that ended the big AHS run and got the home team within 30-28.

“Westmoore is a really good basketball team. That’s as physical as anybody has played us all year. At times, they were like grown women and we were like 15- and 16-year-olds out there.” said Ada head coach Christie Jennings. “I was so proud of our kids for fighting back. They could have just quit. It just showed their character and just how good this team can be.”

Also during that big Ada comeback was some bad news. Owens and starting post player Shayla Wofford picked up their fourth fouls early in the third quarter — Wofford’s came at the 6:12 mark, and Owens got hers with 4:49 showing. They had already missed a chunk of the first half and missed valuable minutes through the late stages of the third quarter and the start of the fourth quarter.

“We just couldn’t go to anybody else. Landyn had already gone on a little run there, and Shayla is so important on both ends of the floor. It hurt us. But I was proud of our kids for staying in the game, with those two getting limited playing time,” Jennings said.

The Lady Cougars trailed by 11 late in the final period but rallied to get within 50-44 on two free throws by Alexus Hamilton with 50.8 seconds left in the game. Those two makes followed a 22-foot 3-point basket by Tatum Havens.

Westmoore made six free throws in the closing seconds to keep Ada at bay.

Owens — who made the all-tournament team — scored 14 points before finally fouling out to lead the AHS offense.

Frizell also reached double figures with 10 points, while Havens finished with nine points and five rebounds before picking up her fifth foul.

All five Westmoore starters scored at least eight points. Torie Simon hit four 3-pointer and finished with 15 to lead her team. Shelby Kraus followed with 10 points, five rebounds and two steals, while Madison Hays — the ECOC MVP —chipped in 11 points before fouling out.

Westmoore, which was taller than Ada at every position, won the battle of the boards 38-28.

The Lady Cougars return to action Friday at Seminole.