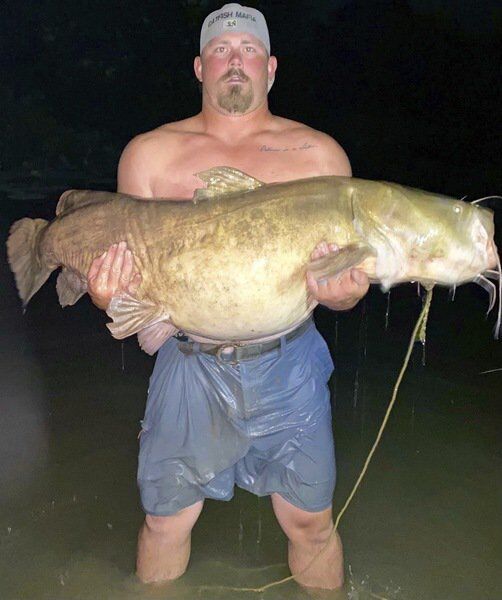 Levi Bennett displays a fish he noodled out of a tinhorn in Texas — with the assistance of his wife, Kodi Benneett and friend Jimmy Millsap — earlier this month. The fish weighed over 100 pounds. 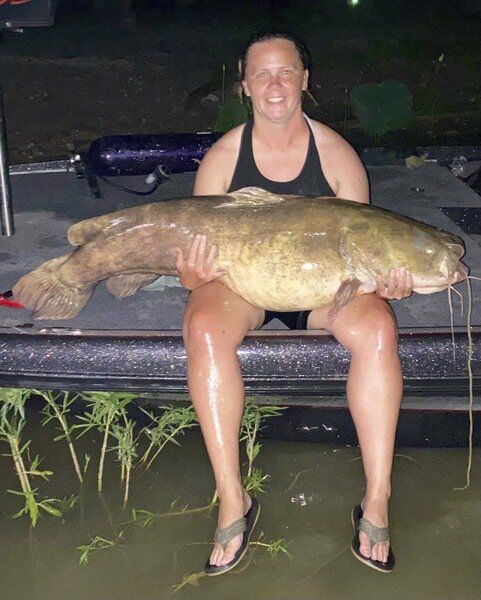 Levi Bennett displays a fish he noodled out of a tinhorn in Texas — with the assistance of his wife, Kodi Benneett and friend Jimmy Millsap — earlier this month. The fish weighed over 100 pounds.

By the way, she’s no longer a Morrison. Kodi recently married her fishing partner in crime, Levi Bennett, so I suppose I should refer to her by her new last name from this point on.

Kodi’s latest fish tale needs no exaggeration. She, Levi and fishing buddy Jimmy Millsap noodled a catfish for the ages on a recent trip.

“It was the fish of a lifetime for sure,” she said.

Just to give readers who might night know a little background on Kodi’s noodling history. She won three straight women’s championships at the Okie Noodling Festival — considered by many at the premiere noodling event in the United States — before the pandemic canceled the event in 2020.

This summer, Kodi was looking to claim her fourth in a row but had the unfortunate luck of having a fish die on her during the contest. In 2019, she won a title with a catfish that weighed 54.05 pounds.

The 2021 overall Okie Noodling champion — Nathan Williams — won with a fish that weighed in at 63.31 pounds.

All that sets up Kodi and company’s biggest fishing tale to date.

On a recent trek to Texas, the trio ventured to an old tinhorn they had visited a time or two before. They had very little luck in this fishing spot in the past, but decided to give it another go. So they grabbed their scuba gear and headed in.

Levi dove in on one end of the tinhorn (or culvert to some) and the other two went to the other end to act as blockers.

“It takes Levi about 10-15 seconds to get to the part of tinhorn to where the fish usually are,” Kodi explained.

“I proceed to kick it to keep it in the hole,” Kodi said, again as any good blocker would do. The lunker then made it to Millsap.

“The fish shoots over to Jimmy and he has the fish blocked to where it can’t get out,” she said. Another good block!

Levi makes his way to his partners but at this point believes the fish has gotten away. Boy was he wrong.

It takes a few seconds to convince Levi that the fish was indeed still in the area.

“So Levi gets his air tank and goes flying back through the tinhorn and gets ahold of the fish. Levi comes up with it and we’re all like ‘Oh my gosh, that is huge!’” Kodi Said.

They finally wrestle the catfish into their boat and take off toward the shore. Levi grabbed his scale and starts to weigh the beast. He can’t believe his eyes.

But Millsap points out that Levi didn’t even have the fish’s tail off the ground.

“Plus Levi could never get the fish off his body because he had to lean back with it to get it up,” she continued. “So there’s a possibility it might have weighed more.”

Now would be the time to tell you the national noodling record — the fish was caught in Oklahoma — is 87.85 pounds. This fish the Kodi trio landed would likely have shattered a noodling world record.

“I couldn’t pick it up and I can pick up fish,” Kodi said. “Levi and Jimmy had to pick it up and put it on my lap while sitting in the boat. It was nuts.”

Alas, it was hot and they didn’t want anything to happen to the fish do they released the Krakken so it would survive and didn’t track down any official wildlife scales.

“It would be an unofficial record for sure,” Kodi said.

It’s a fish tale those three will have fun sharing for years to come.