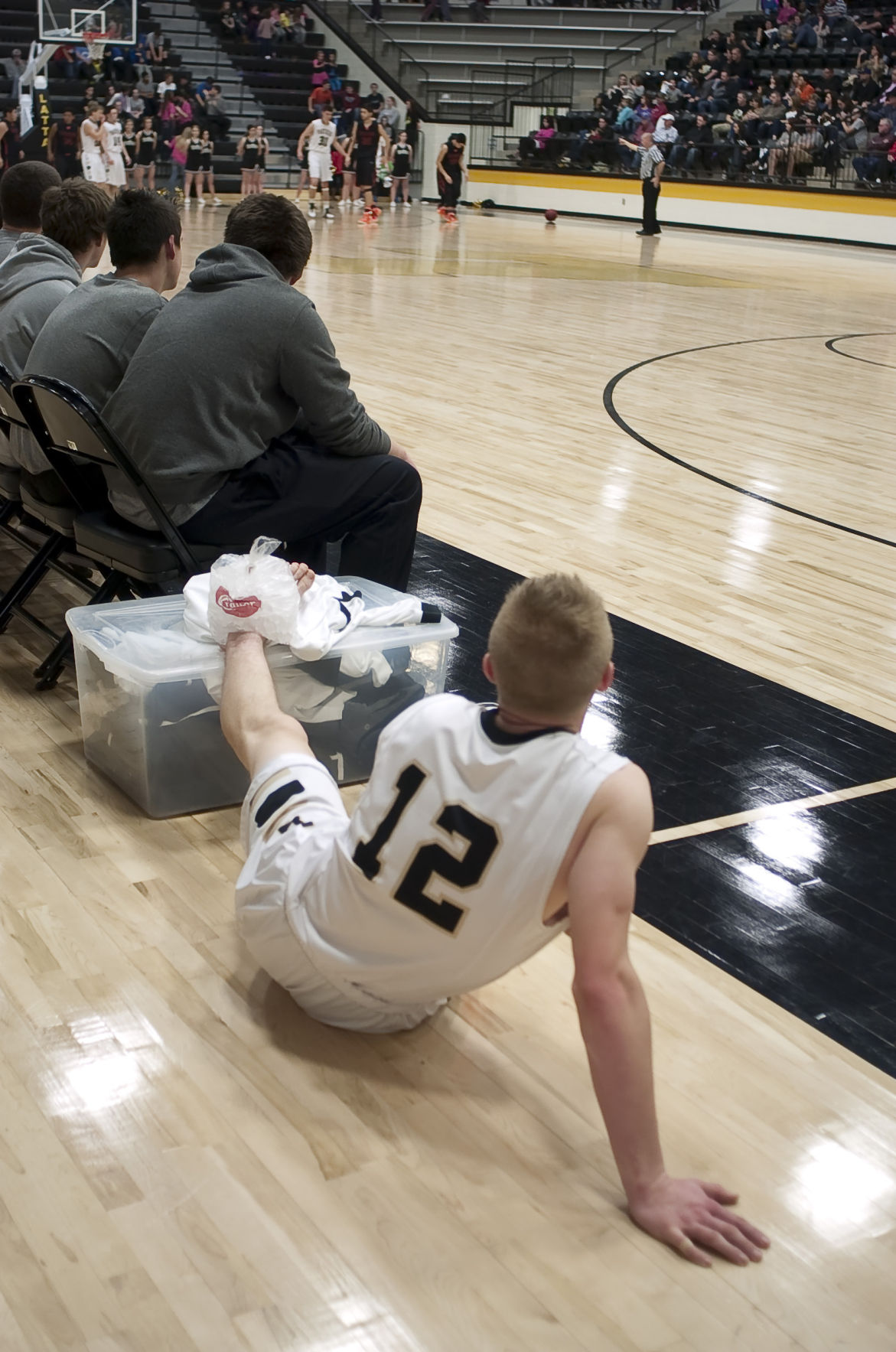 Latta senior Treston Tully (12) ices his ankle after injuring it early in the contest against Konawa Friday night. Tully is questionable for Tuesday night's contest in Roff. The Panthers defeated Konawa 65-35. Purchase this image at theadanews.smugmug.com. (Photo by Richard R. Barron) 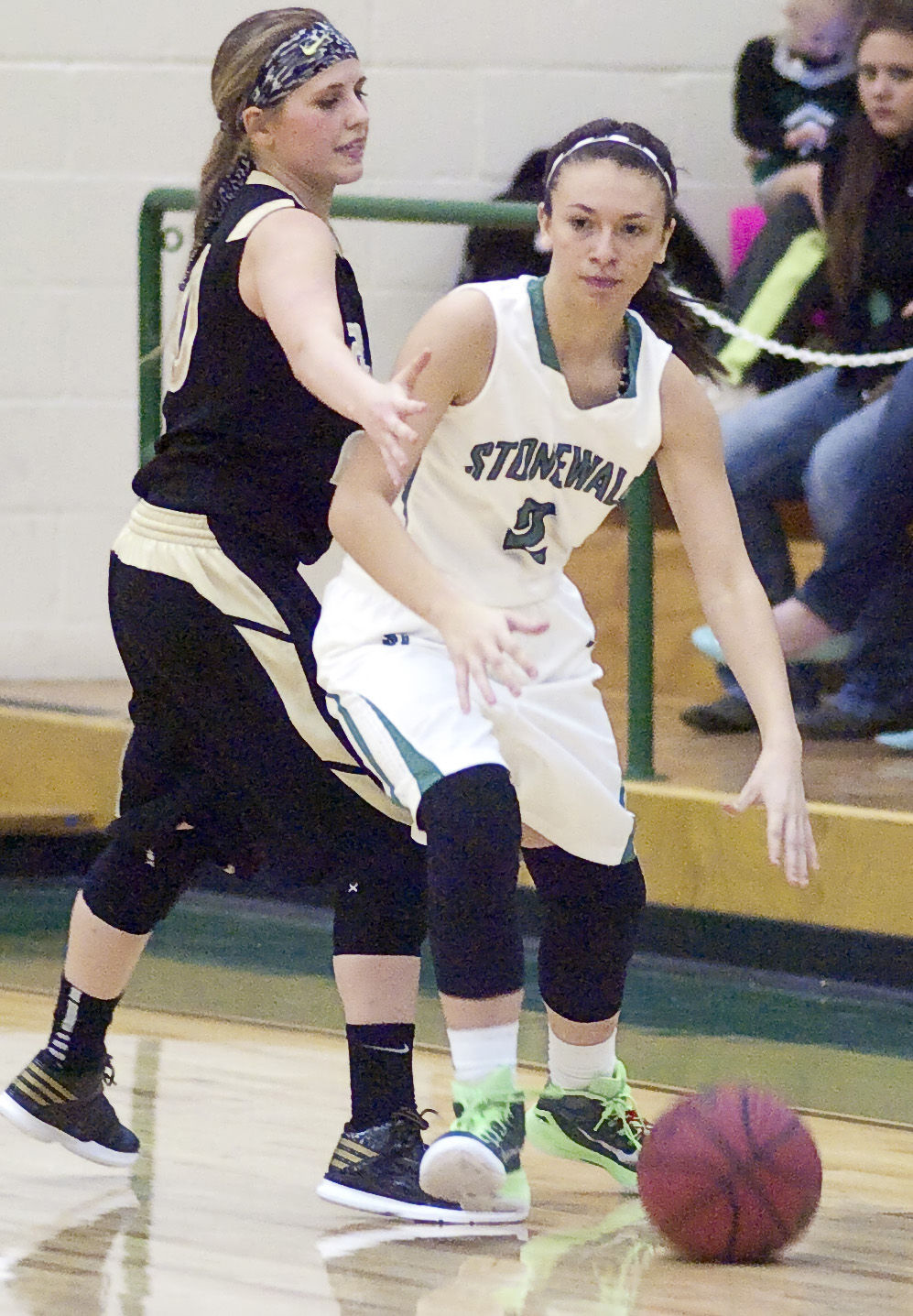 Latta senior Treston Tully (12) ices his ankle after injuring it early in the contest against Konawa Friday night. Tully is questionable for Tuesday night's contest in Roff. The Panthers defeated Konawa 65-35. Purchase this image at theadanews.smugmug.com. (Photo by Richard R. Barron)

NOTEWORTHY: Carter Kessinger tossed in 14 points, including a pair of 3-pointers, and Derek Epperly added 10 points as the Class 2A top-ranked Latta Panthers upended Konawa 65-35 Friday night. Tanner Smith and Kele Parnacher each finished with nine points off three treys and Adam Walker ended up with eight points. Haydoekeyo Tsosie paced the Tigers with 12 points, including one 3-point basket, and Branden Davis chipped in 11 points, including two treys. Latta trailed 11-10 after one quarter and held a slim 25-23 halftime edge. However, the Panthers came out blazing in the second half, outscoring Konawa by a 22-8 margin in the third quarter and an 18-4 flurry in the fourth. Latta starter Treston Tully suffered a first-quarter ankle injury and did not return. His status for Tuesday night’s contest at Roff is questionable.

COACH’S QUOTE: “I thought Konawa did a good job on us early. They jumped out to a 7-0 lead, but we did a good job of responding after halftime. We played good defense and had contributions off the bench.” — Latta head coach Matt Bryant.

Up Next: Latta at Roff Tuesday; Byng at Konawa Friday.

NOTEWORTHY: Four Roff players scored in double figures as the Tigers rolled to a 57-41 win at Asher Friday night. Josh Lewis tallied a game-high 16 points for Roff while Zach Lewis tossed in 12. Mike Anderson and Hunter Larsh each finished with 10 points and each knocked down a pair of 3-point buckets. Josh Lewis added one trey. Caleb Dubler and Tim Johnson paced the Indians in a losing cause with 11 points apiece. Dubler and Johnson each connected for one 3-point basket. Leading 12-10, Roff went on a 12-4 run in the second quarter and a 21-14 spurt in the third to lead 45-28, heading into the fourth period.

COACH’S QUOTE: “I was really proud of our effort. We played hard and converted some things we have been working on in practice.” — Roff head coach Clay Plunk.

NOTEWORTHY: The Stratford Bulldogs saw their eight-game winning streak stopped as visiting Community Christian School posted a 43-41 victory and claimed a Big 8 Conference Championship Friday night. Stratford, which played without two of its players due to sickness, did not attempt a free throw the entire night. CCS tried just four. Matt Blackburn led the Bulldogs with 13 points as he drilled three 3-pointers. Lane Martin hit one trey and finished with nine points in a losing effort and teammate Cade Savage finished with eight points, including two treys.

COACH’S QUOTE: “It was really a slugfest. We played hard and played good defensively. Our second-leading scorer Bobby Cothren was out with the flu and Avry Wood, our backup post, was sick as well.” — Stratford head coach Mark Qualls.

Up Next: Wayne at Stratford Tuesday.

NOTEWORTHY: Dakota Teel rebounded a Christian Morgan missed shot and scored at the buzzer as Stonewall edged Allen, 46-45, Friday night. Morgan had driven the length of the court before Teel rebounded Morgan’s miss to score. Teel led the Longhorns with 14 points and Cayman Watkins had 12 points, including three 3-point baskets. Chase Findley was next with 10 points for Stonewall and Morgan tallied eight. Allen was led by three players with 10 each – Tommy Peay, Ty Brown and Christiam Henry. Peay and Henry each knocked down a pair of treys.

COACH’S QUOTE: “We played extremely well on both ends of the floor. They (Allen) are a very tough team. It was a good win for us. We have really had a tough stretch of games the past three weeks.” — Stonewall head coach Wes Moreland.

Up Next: Stonewall hosts Stringtown for a district playoff game Friday. Bowlegs at Allen Tuesday.

NOTEWORTHY: Bryce Cobb and T.J. Cobb each tossed in 11 points as the Wanette Tigers overcame a shaky start to defeat host Mill Creek 47-31 Friday night. Bryce Cobb converted his team’s only 3-pointer to go with five rebounds and three steals. T.J. Cobb recorded six steals and six assists to go with four boards. Wanette’s Geirad Himes collected a team-high eight rebounds to go with his eight points, three steals and two assists. Matt Hooser totaled eight points and seven boards. The two teams were deadlocked at 4-all after one quarter, before the Tigers went on a 17-4 run in the second quarter to take control.

COACH’S QUOTE: “You could tell we haven’t played in a week. We were very sluggish and our effort wasn’t what it has been. We started to be more in sync later in the game. It’s always hard to go into Mill Creek and get a win. I’m really proud of these guys for getting that win. We have two games left before we start the playoffs and I think we will have it all going for us by then.” — Wanette head coach Jeff Parnell.

Up Next: Wanette at Bowlegs Monday.

NOTEWORTHY: Dalton Barnes sank three 3-point shots and finished with 16 points, but it wasn’t enough as the Tupelo Tigers dropped a 61-57 decision at Caddo Friday night. Corey McCollum contributed 12 points for Tupelo and Christian McLean was next with nine. The visiting Tigers forced overtime by outscoring Caddo, 16-10, in the fourth quarter.

COACH’S QUOTE: “Once again it was a game that we had a great opportunity to win, but couldn’t finish. Their strength hurt us inside and we didn’t guard the interior well at all. Watson went down early in the second quarter with an ankle injury and did not return. That put a lot of stress on our guard play. We had a chance to win in regulation and came out flat in OT.” — Tupelo head coach Clay Weller.

Up Next: Tupelo at Victory Life Monday.

NOTEWORTHY: Tarin Dubler sank four 3-point shots and finished with a game-high 18 points as the Class B 18th-ranked Asher Lady Indians upended the visiting Roff Lady Tigers, 55-29, Friday night. Shelby Fleming followed with 11 points and Haley Odell finished with 10, including a pair of 3-point baskets, for Asher. Ashley Cornell topped Roff with eight points. The Lady Indians took control of the game early, building a 23-6 advantage after just one quarter and cruising to a 42-13 halftime lead. Asher then limited the Lady Tigers to one point in the third while building a 51-14 cushion, heading into the fourth.

Up Next: Strother at Asher Tuesday. Latta at Roff Tuesday.

NOTEWORTHY: Community Christian School (No. 13 in Class 2A) raced out to a 30-5 lead after one quarter and cruised to a 71-38 decision over the host Stratford Lady Bulldogs Friday night. CCS led 40-14 at halftime and 55-21 through three quarters. Carley Roberts paced Stratford with 15 points, including two treys. Reagan Tice followed with seven points, including one 3-pointer. Katherine Manis led the Lady Royals with 16, while Hope Wood also hit double figures with 13.

Up Next: Wayne at Stratford Tuesday.

NOTEWORTHY: Krisha Young scored 14 points, including two 3-pointers, and Laramie Edens added 13 points as the Class 2A fifth-ranked Latta Lady Panthers topped visiting Konawa, 51-25, Friday night. Latta’s Maria Priest followed with six points and recorded four steals. Teammate Sidney Brinlee pulled down 10 rebounds to go with her three points. Presley Kirkwood paced Konawa with six points while Dominique Lyon, Kamry Walker and Mahaley Larney ended up with four apiece. The Lady Panthers jumped out to a 17-2 advantage after one quarter and led 35-9 at halftime. The two teams tallied 16 points each in the second half.

COACH’S QUOTE:“It was good to play. We hadn’t played in over a week. I thought we played pretty well. They (Konawa) have gotten better since we played them last time.” — Latta head coach David Tinkler.

Up Next: Latta at Roff Tuesday; Byng at Konawa Friday.

NOTEWORTHY: The Class A 12th-ranked Stonewall Lady Longhorns knocked down nine 3-pointers and overcame a 19-10 deficit after one quarter to defeat the 19th-ranked Allen Lady Mustangs 47-39 Friday night inside the Murphy-Roberts Gymnasium. Alexis Lambert canned four treys and finished with a game-high 20 points to go with three steals to fuel Stonewall. Teammate Lauryn Humphers followed with eight points, including two 3-pointers, and Justice Dees chipped in six points and yanked down seven rebounds. Alison Sells had Allen’s only trey and led the Lady Mustangs with 13 points and Charlea Leonard had 10. After trailing by nine at the end of one period, the Lady Longhorns went on a 16-6 run in the second quarter to take a 26-25 halftime edge. Stonewall then went on a 12-6 spurt to take a 38-31 advantage, heading into the fourth quarter. Allen shot 50 percent from the field overall (15-of-30), but managed just an 8-of-16 effort from the free-throw line, made only one 3-point basket and committed 23 turnovers. Stonewall overcame 25 miscues and was only 17-of-44 from the field and just 4-of-11 from the charity stripe.

COACH’S QUOTE: “It was a good win against a very good team. I was happy that the girls wrapped up the conference with a 7-0 record and was able to check off another team goal. We will enjoy the win and the conference championship this weekend, then get back to work and see if we can reach our playoff goals.” — Stonewall head coach Brian Davis.

Up Next: Bowlegs at Allen Tuesday. Stonewall hosts a Class A district next weekend. The Lady Longhorns will face the Vanoss-Stringtown winner on Saturday.