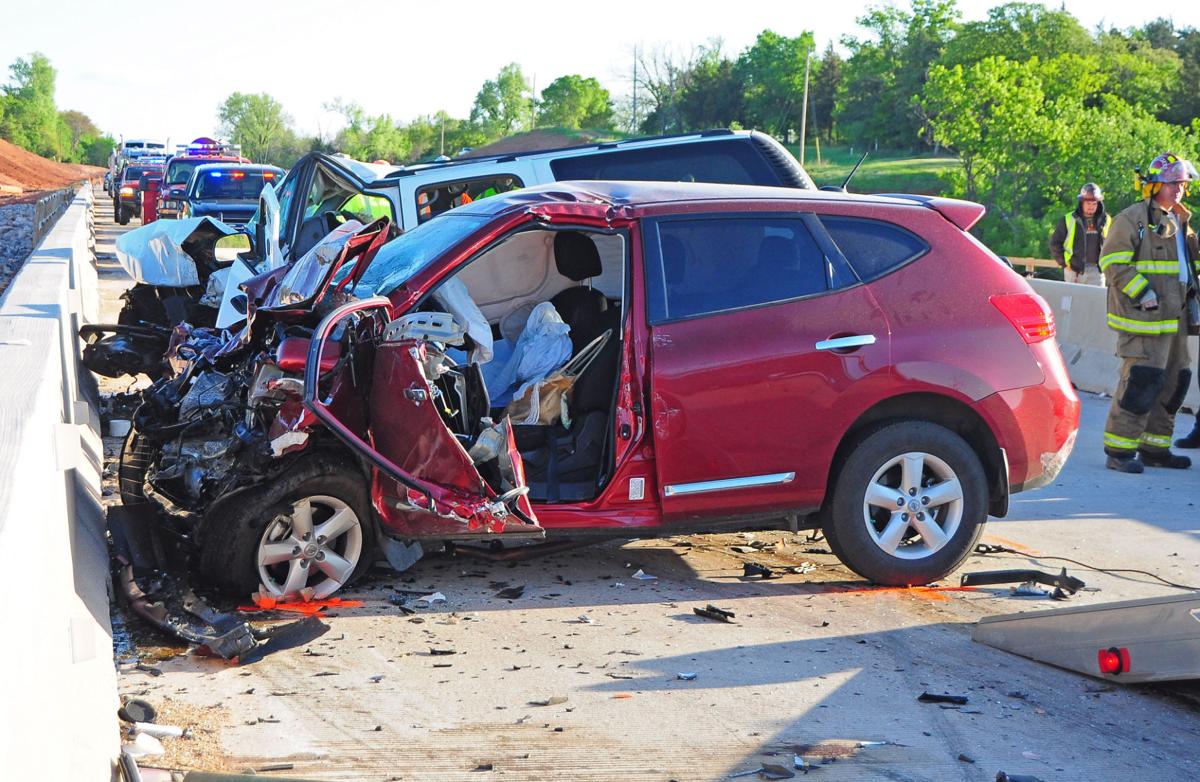 Jodi Lopresto's maroon Nissan Rogue sits mangled beside a Chevrolet Suburban after a near-fatal head-on collision with a DUI driver April 30, 2014. Lopresto spent months in hospitals and is still facing further surgeries to repair damage caused by the wreck. A felony arrest warrant has been issued for the driver of the Suburban. 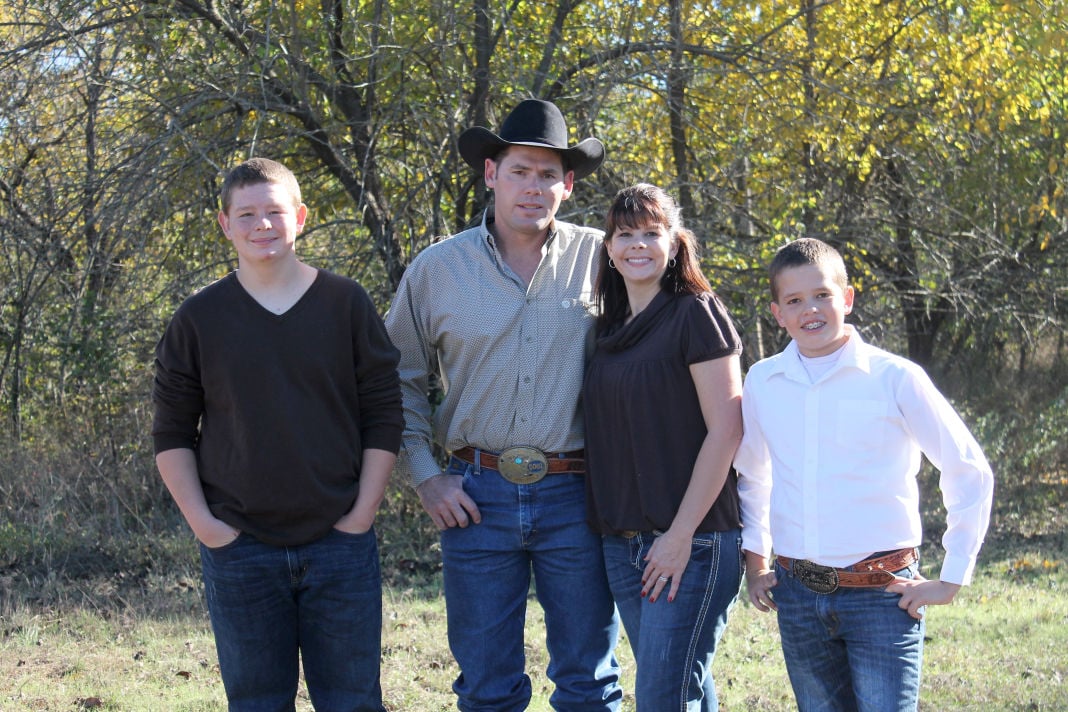 Jodi Lopresto's maroon Nissan Rogue sits mangled beside a Chevrolet Suburban after a near-fatal head-on collision with a DUI driver April 30, 2014. Lopresto spent months in hospitals and is still facing further surgeries to repair damage caused by the wreck. A felony arrest warrant has been issued for the driver of the Suburban.

ADA — When Jodi (Vaughan) Lopresto, a self-described vivid dreamer, awoke the morning of April 30, 2014, she had no idea a horrific nightmare would occur while she was awake.

The day started like any normal weekday. The 36-year-old mother of two hugged her kids and got in her car to drive to work from her home near Lexington to her job with the Chickasaw Nation in Ada.

“That morning I walked out my front door, telling my two boys I loved them and to have a good day at school, not knowing our lives would be forever changed,” she said.

Jodi had been a single mom for a long time. About two years before, she met Brian Lopresto. Soon, the pair had made plans to get married. That Wednesday, Jodi was looking forward to the coming weekend when she, Brian and her sons, Nathan, then 16, and Cody, then 13, were departing on a cruise.

Jodi and Brian’s wedding was set to take place in Cozumel, Mexico, when the cruise ship docked there. Her heart was set on the tropical wedding and vacation ahead with her family by her side. Little did she know, her heart would stop twice on that day.

Jodi was driving her Nissan Rogue south on state Highway 3 just south of Asher. The old two-lane bridge which spanned the South Canadian River was being replaced with a four-lane bridge. On this day, both directions of travel were funneled into two lanes of the bridge which had been completed. She reduced her driving speed to the construction zone speed limit. The bridge was nice and new, but concrete barrier walls on each side of the two-lane stretch left little room for error.

Stratford resident Georgia Gillian-Ramsey, 51, was driving a 2011 Ford Edge in the opposite direction on SH3, also commuting to work.

As Jodi’s and Ramsey’s vehicles approached one another on the bridge, Audrey Estelle Farrington, 29, of Meade was driving north at a furious rate of speed in a 2003 Chevrolet Suburban and attempted to pass Ramsey, according to the Oklahoma Highway Patrol.

With the Suburban heading straight for Jodi, the concrete barrier to her right and Ramsey’s vehicle to her left, Jodi had nowhere to go. She did the only thing she could — she hit the brakes.

“All I remember is seeing a white Suburban whipping out from behind a car like a NASCAR driver heading straight toward me on the bridge,” Jodi said. “They estimated that she hit me going 95-miles-per-hour.”

According to an OHP report, the impact from the SUV drove Jodi’s Rogue backward 98 feet. The impact also caused the Suburban to spin, with the rear passenger side slamming into the front driver’s side of Ramsey’s vehicle.

Jodi was horrifically injured. With dozens of broken bones and internal bleeding, she said she remembers coming to and screaming for help. She was in terrible pain. Twisted and broken, she was trapped inside her mangled vehicle.

“Angels were on my side that day, as right behind (Farrington) not far was off-duty Ada Police Officer Kevin Hood, who got highway patrol and rescue from Ada there to assist in getting me out and to the hospital,” Jodi said.

Firefighters from Ada, Oil Center and Asher freed her from the wreckage using hydraulic prying and cutting tools. Mercy EMS rendered aid at the scene and took Jodi to a waiting helicopter. She was flown to OU Medical Center in Oklahoma City where doctors and nurses would continue efforts to save her life.

“Once I got to the hospital, I coded (her heart stopped),” Jodi said. “I had lost so much blood internally and I had open fractures so I’m sure I was bleeding outside everywhere, too.”

Brian was later told his fiancé had been in a wreck. He went straight to the hospital. Staff there told him doctors were working on her and as soon as it was possible, a doctor would be out to talk to him. Doctors worked for hours to stabilize her, during which time her heart stopped again.

At around 1 p.m., a trauma surgeon came out and spoke to Brian. Jodi’s spleen was lacerated and doctors had to take out a large portion of her small and large intestine just to stabilize her. She was turned over to orthopedic surgeons.

“I had very extensive leg damage from it all,” she said. “I was in surgery until six or seven o’clock that night. I don’t really remember anything. I remember the ICU. I am a pretty vivid dreamer, and it’s one of those things where I woke up and I saw the curtains and the nurses, and I see the flashback of that truck and I was thinking, I was still in a dream. I pulled out the tubes.”

The pain she experienced when she pulled out the tubes from her nose and mouth caused her to lose consciousness. Jodi said it took several days to even think straight.

The morning of the wreck, Jodi’s coworkers reached her oldest son at school to let him know what had happened.

“It just kills me thinking that, my kids, which, I have raised my boys all on my own until three years ago, so we have a pretty good bond, and for them to find out at school that your mom’s been in a wreck,” Jodi said Thursday.

She was in the ICU for four days and was hospitalized for months.

“My femurs were broken, my knees, my right foot (was broken) because I had just slammed on the brake so much that everything (was broken). I think the top of my foot wound up meeting the top of my shin or something.”

Her jaw was broken on both sides.

“One part of the right side of my jaw required my mouth be wired for six weeks, but my left side, it fractured right through part of a joint that is still broken,” she said. “They need to put in an artificial joint. I just don’t want to have my jaw wired for six weeks again.”

She said her chin was shattered and doctors put a plate in her mouth. She suffered compressed vertebrae in her neck and lower back. Her sternum was also broken.

For the tomboy-tough Jodi, who grew up toiling on a dairy farm in rural Missouri and always took care of everyone, having to rely on everyone else to take care of her was a nightmare.

On May 9, she was wheeled outside to see the sunshine for the first time since the wreck. She spent Mother’s Day in the hospital and eventually transferred from OU Medical Center to rehab at Norman Regional Hospital. She said she holds the record at the rehab for the most broken bones.

Jodi was not allowed to walk or put weight on her legs for three months.

She said it took some doing as she had forgotten how to stand. She suffered feelings of worthlessness during her recovery and had to fight feelings of giving up.

“All summer, basically my 13-year-old (Cody) took care of me during the day, because my 16-year-old (Nathan) was working at a farm, and when (Brian) had to work, so (Cody) was my caregiver when my physical therapist and nurses weren’t there.”

After six months of recovery, Jodi returned to her job.

“I came back to work in October,” Lopresto said, “right at my six-month mark.”

She said her coworkers were like family and were a huge help to her and her family after the wreck and during her recovery, for which she is grateful. Jodi continues to work and walks with the aid of a cane. Her recovery isn’t over yet, though. She faces more surgeries in the future.

“I have my jaw surgery that I need to eventually do,” she said. “I need to have my knee replaced and my right femur is not growing correctly, it’s just not enough bone, so when they do the knee replacement on my right side, they’ll go ahead and put a rod up. I have plates that they put on the outside of my femurs, well, they will take that out and they’ll just put a cadaver bone or a rod to replace that femur, because it’s just not 100 percent strong.”

Jodi has insurance through the Chickasaw Nation, which was invaluable.

“And I thank the good Lord because my OU bill was $950,000,” she said. “I literally had over $1 million in medical bills last year. My helicopter bill, which, they don’t take insurance, was $38,000 to fly me from Asher to Oklahoma City. But it saved my life and all of that doesn’t matter.”

Jodi didn’t want to get married until she could walk down the aisle with her father and dance at her wedding. The big day came in October.

“With a little assistance from my cane and my dad, I was able to,” she said.

Jodi said the wreck and the subsequent battle to survive solidified her family.

“Before my accident, Brian, my boys and I, you could say we were four individuals,” she said. “The one (good) thing that came out of my accident, we became one unit. I mean everything. We worked together and do everything together. Accidents can break a family or make a family. It truly brought our family closer.”

Georgia-Gillian Ramsey and Jodi have become Facebook friends since the wreck. Ramsey suffered whiplash during the wreck, Jodi said.

“Since then, we’ve had dinner and become Facebook friends and we share our lives together,” she said. “She’s a wonderful woman. She, like me, has to go over that bridge because she lives in Stratford and works in Shawnee.”

According to blood tests conducted by the Oklahoma State Bureau of Investigation, Farrington tested positive for methamphetamine, lidocaine, dextromethorphan and midazolam. On January 29, 2015, Farrington was charged in Pottawatomie County with felony driving under the influence of intoxicants, causing great bodily injury, according to court records. An arrest warrant was issued, but as of press time Saturday, she had not been arrested.

Oh, and what about that cruise she and her family never got to take? Jodi, Brian, Nathan and Cody embarked this month. They set sail from Galveston, Texas, on a seven-day cruise where they swam with dolphins and had a great time.