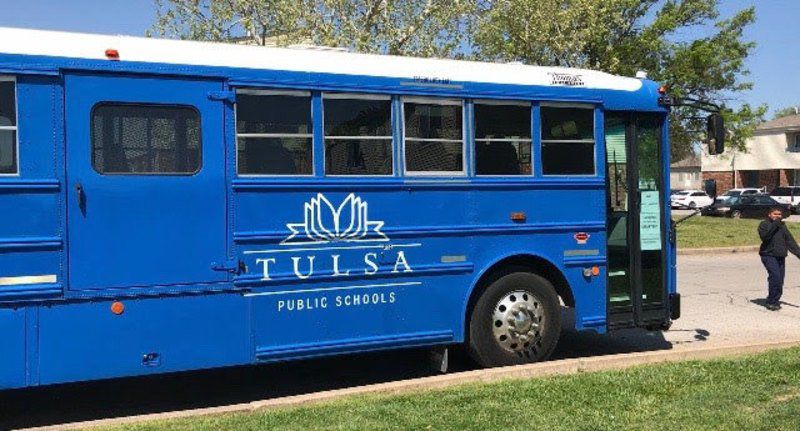 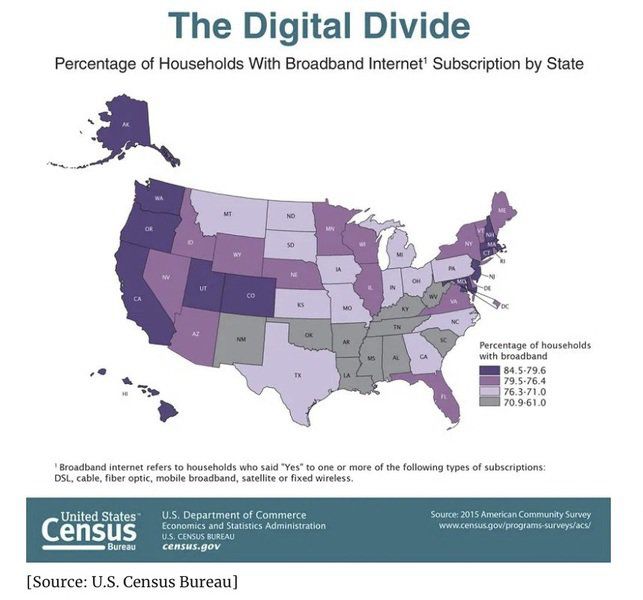 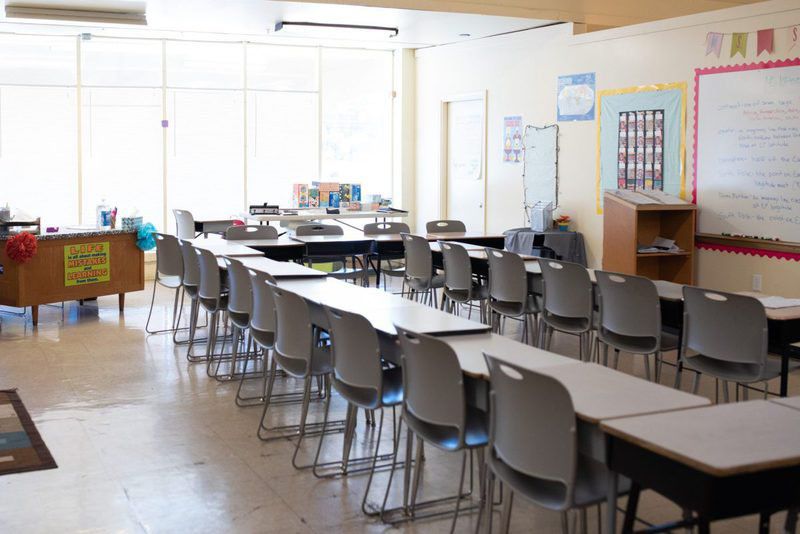 An empty classroom is seen at Santa Fe South Sixth Grade Center, a public charter school in Oklahoma City, in 2018. 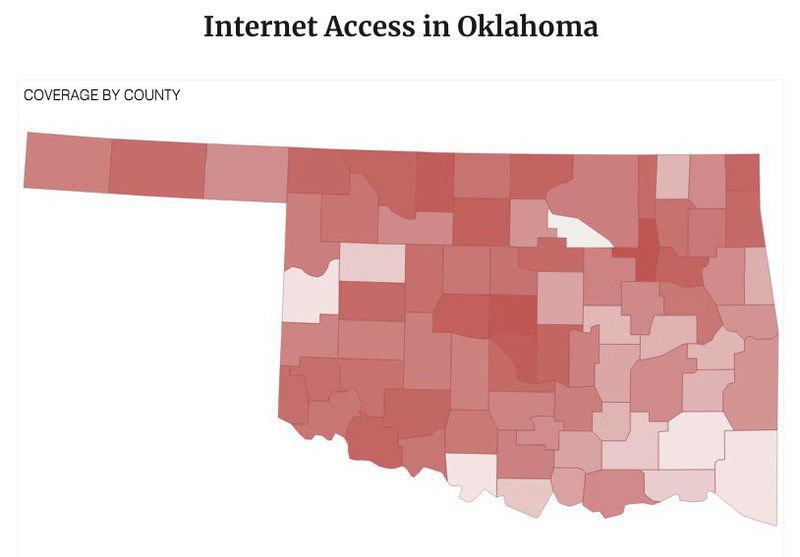 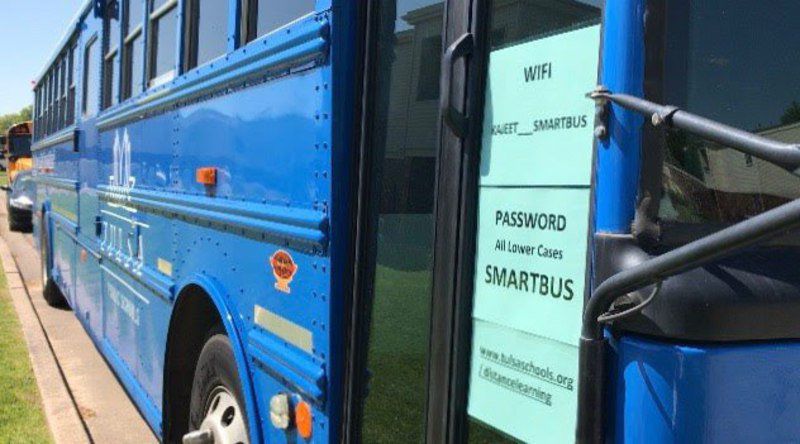 Tulsa Public Schools is using its bright blue activity buses as mobile hot spots to help students with distance learning. The buses provide wireless internet access up to 300 feet away and are parked at various locations around the city.

An empty classroom is seen at Santa Fe South Sixth Grade Center, a public charter school in Oklahoma City, in 2018.

Tulsa Public Schools is using its bright blue activity buses as mobile hot spots to help students with distance learning. The buses provide wireless internet access up to 300 feet away and are parked at various locations around the city.

When the coronavirus pandemic closed school buildings, teachers were tasked with connecting to students from afar. Suddenly, students’ lack of home internet access was in the spotlight.

A mid-March survey by the Oklahoma Education Department showed that nearly one-quarter of the state’s public school students, about 167,000, don’t have internet access at home.

That means in places like Hugo, a community of 5,100 in southeastern Oklahoma, teachers had to try to reach students through phone calls, emails and letters. The district has distributed hundreds of schoolwork paper packets to students who are offline.

Despite the efforts, some students didn’t respond.

“We are lucky to have an outstanding group of teachers who found creative ways to reach their students during the crisis,” said Superintendent Earl Dalke. “If we had been able to provide learning opportunities to all students online, we would have been able to do a far better job.”

In some rural areas, internet service is spotty or slow or even nonexistent. Districts have been scrambling to buy hot spots, which create a wireless internet connection through cellular networks. That created a backlog with cellular companies, with orders taking weeks. Some districts rolled wireless internet-enabled school buses into neighborhoods or welcomed families to school parking lots for a signal.

It’s a patchwork approach that officials say is leaving some students behind.

It’s also a hasty, crisis-driven approach, given the circumstances. But the upcoming influx of federal relief dollars presents an opportunity to address what state Superintendent of Public Instruction Joy Hofmeister called “a lingering issue,” meaning inadequate broadband at home.

The state is expecting $160 million in federal relief funds for K-12 education, 90% of which will be allocated directly to school districts. Ten percent, or $16 million, can be spent by the department.

Gov. Kevin Stitt, like all state governors, is receiving an additional federal grant for education from the governor’s emergency education relief fund. Stitt is set to receive $40 million. Stitt said on April 17 that he is considering spending some of the funds on a private school scholarship fund or for Advanced Placement classes in rural areas, drawing widespread backlash.

“Our primary focus is on connectivity and the ability to close the digital divide,” Hofmeister said about the department’s portion of funds. She proposed that Stitt also use his portion on internet access. “Our schools are looking for a long-term plan.”

Secretary of Education Betsy DeVos also is urging school districts to use the funds to invest in “technology, distance learning resources, training and long-term planning,” to support distance learning, according to a recent press release.

Even when schools reopen, likely this fall, some situations could require another pivot to distance learning. A resurgence of COVID-19 could require widespread closures again. Social distancing could lead schools to hold more digital days to reduce risk. Individual students could be distance learning if exposure to COVID-19 requires them to quarantine at home.

Districts’ relief funds will be distributed through the Title 1 formula, which is based on the number of low-income students served by the district. But the funds have fewer restrictions than Title 1 funds. For instance, federal CARES Act funds can be spent on technology infrastructure upgrades that impact the entire district.

“Think about internet access through Wi-Fi and the ability to not only impact common education, but students regardless of where they go to school,” Hofmeister said. “This is more of a global, comprehensive answer.”

Ninety-nine percent of schools in the country are outfitted with high-speed internet and Wi-Fi in classrooms to support digital learning, according to EducationSuperHighway, a nonprofit focused on improving Internet access in public schools.

But step off school grounds in Luther and internet access is “really difficult or slow,” said Barry Gunn, Luther’s superintendent. That’s the case in many communities.

“We’re not as rural as most schools, and it’s spotty out here in certain places,” Gunn said. Luther is less than 30 miles from downtown Oklahoma City on the eastern side Oklahoma County.

Fewer than half of Oklahoma’s rural residents have access to high-speed internet – one of the lowest percentages of any state, according to a Federal Communications Commission report. Only two states reported a smaller percentage of rural access: Arizona and Nevada.

That’s 651,000 Oklahomans in rural areas who don’t have access to high-speed internet, defined as download speeds of at least 25 megabits per second.

“In today’s world, how we are interconnected is a necessity,” said David Ostrowe, state secretary of digital transformation and administration. He wants to see all Oklahomans have not only access, but speeds of at least 100 megabits per second, a goal he called “lofty.”

“Rural access is currently the biggest hurdle. It is very expensive to provide internet access to these areas,” Ostrowe said.

One of the most effective workarounds is a portable hot spot, which taps into a cellular network and provides internet access. These devices are how Epic Charter Schools, the state’s largest virtual school with nearly 30,000 students across the state, provides internet to any student who needs it. Like other schools, Epic will receive federal relief funds.

The devices Epic provides work independent of a family’s cell phone and the school pays the monthly data plans for the service, said Shelly Hickman, a spokeswoman for Epic.

Demand for hot spots soared in the past few weeks as schools transitioned to distance learning. Dozens of school districts across the country have contacted EveryoneOn, a nonprofit working to improve internet access and device accessibility for low-income families, about purchasing hot spots and LTE-enabled tablets, said Chief Executive Officer Norma Fernandez.

There’s a backlog, she said, and orders that previously would have been fulfilled in a week are now taking two or three weeks. Schools are trying to order thousands at a time. In the meantime, students are trying to transition to distance learning without the tools they need, adding stress to an already stressful situation.

“We are talking about kids who are already behind,” Fernandez said. “It has a significant impact on their learning.”

Tulsa Public Schools, the state’s second largest district, distributed tens of thousands of Chromebooks. But getting all students connected to the internet has proven more difficult.

“We provided a computer to any child who needed one, and we were able to do that because of the generosity of Tulsans,” said Superintendent Deborah Gist, referring to bond dollars. “The challenge is internet access.”

The Tulsa school board Monday night approved the purchase of 1,500 hotspots to give students internet access for summer school.

High-speed internet is available to 95% of Oklahomans living in urban areas and less than 50% of those in rural areas, according to the FCC. Affordability is still an issue statewide. Even with low-cost plans available, providers can deny service based on a family’s credit history.

One solution the district has used is parking a school bus with free Wi-Fi at various locations throughout the city to fill in the gaps.

Similarly, Oklahoma City Public Schools has welcomed families to its school parking lots to access free Wi-Fi while schools are closed. And in Tahlequah, the local electric cooperative has added two free public Wi-Fi spots at a school and city park as part of the FCC’s “Keep Americans Connected” initiative, according to the Tahlequah Daily Press. More than 700 companies have signed the pledge to not terminate service due to customers’ inability to pay their bills, waive late fees and open Wi-Fi hot spots to Americans who need them.

School solutions such as these, while helpful temporarily, are not suitable long-term, said Fernandez, of EveryoneOn. And they present equity issues.

“We want access that is equitable and ubiquitous. We don’t expect higher-income families to drive to a parking lot to access the internet,” she said.

When the state ordered a full switch to distance learning for all districts on April 6, Idabel was ready.

A month before schools shuttered for the coronavirus pandemic, Idabel Public Schools held the district’s first “virtual day.” It was something superintendent Doug Brown had heard about on a podcast, and he wanted to try it as part of an ongoing effort to increase the district’s use of technology.

Three years ago, the district started providing hot spots to teachers, and when they upgraded, the district held on to the older ones for student use. “We check them out like a library book,” he said. They also are a one-to-one district, meaning all students have a computer or tablet to use. The community approved a $1 million bond for technology equipment in 2017.

“We’ve been really blessed. We were really prepared for this situation,” Brown said.

Student participation in Idabel’s distance learning is averaging over 90%, which he called “phenomenal.”

The district, in far southeastern Oklahoma, has 1,200 students this year. Nearly 90% are eligible for free or reduced-price lunch, an indicator of poverty. Brown said that drives his push to increase technology access.

“Technology is here and it’s not going away, and we have to move forward in our educational system,” he said. “It’s even more important for poor districts to provide these opportunities.”