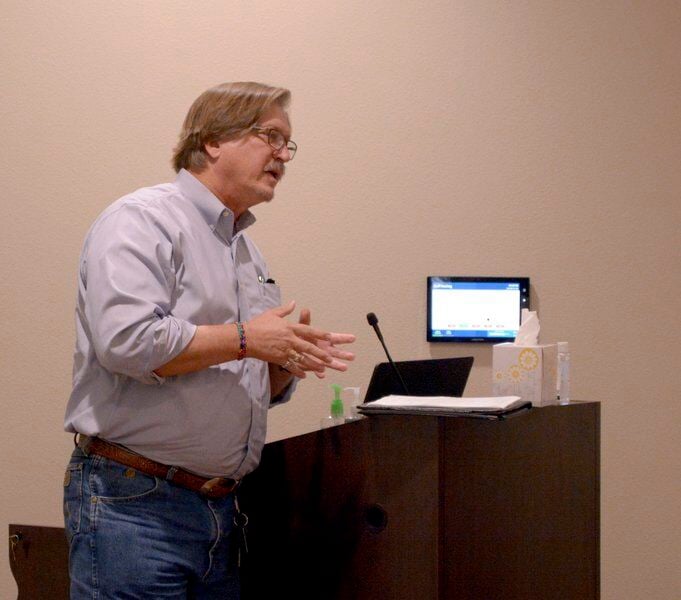 Tony Scott, the son of a resident who lives next to property where a planned solid waste transfer station will be constructed, voices his concerns Thursday at a meeting held by the Oklahoma Department of Environmental Quality. 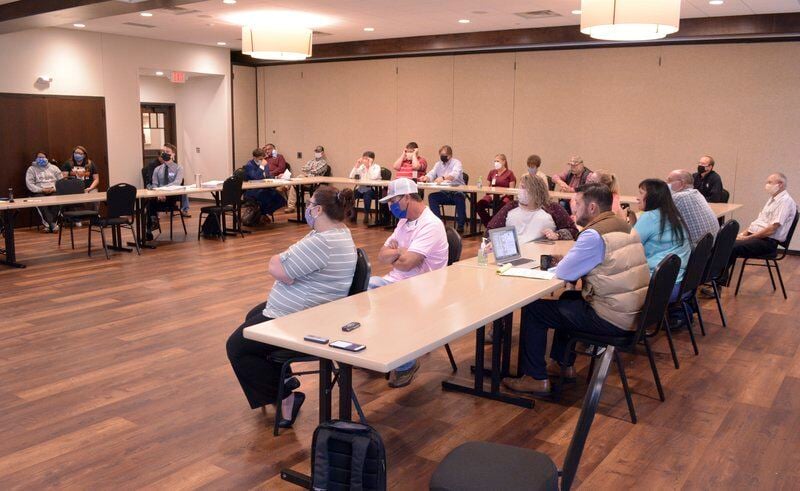 Concerned residents attend a meeting Thursday involving a permit for the city of Ada to build a solid waste transfer station next to the city’s landfill which is nearing capacity. 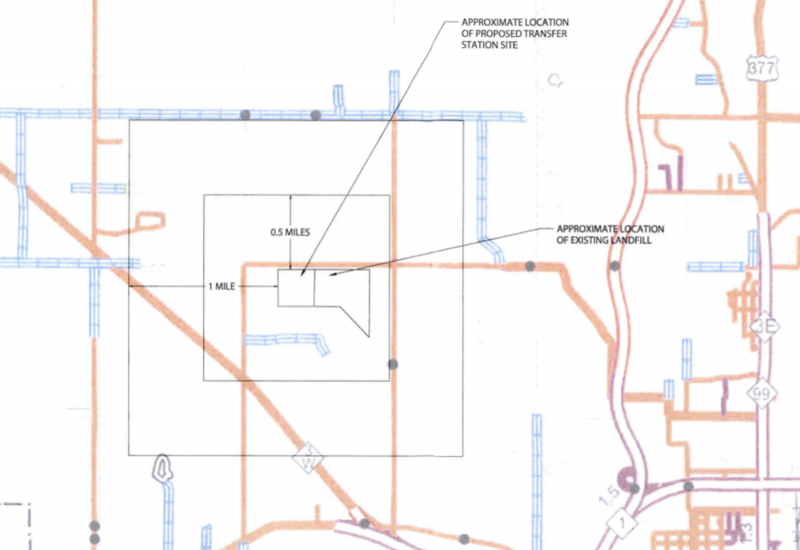 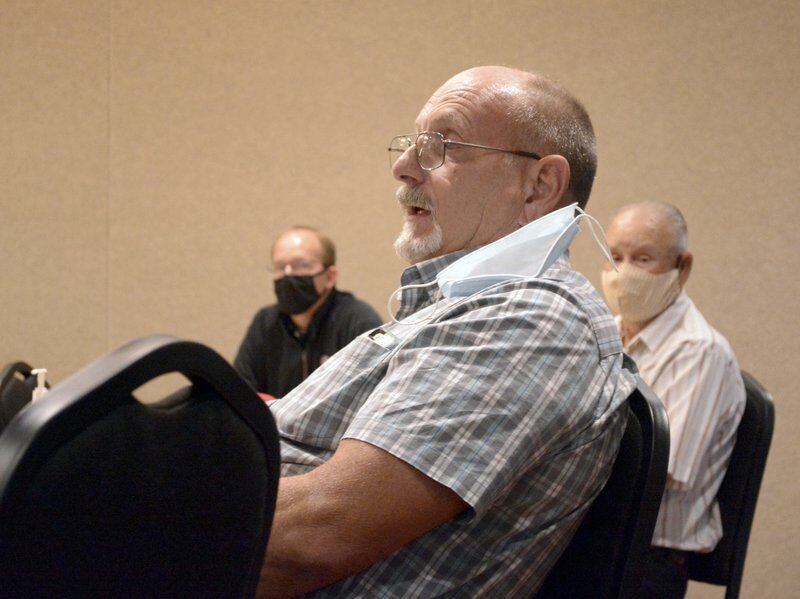 Craig Whipple, a resident who lives next to property where a planned solid waste transfer station will be constructed, voices his concerns Thursday at a meeting by the Oklahoma Department of Environmental Quality.

Tony Scott, the son of a resident who lives next to property where a planned solid waste transfer station will be constructed, voices his concerns Thursday at a meeting held by the Oklahoma Department of Environmental Quality.

Concerned residents attend a meeting Thursday involving a permit for the city of Ada to build a solid waste transfer station next to the city’s landfill which is nearing capacity.

Craig Whipple, a resident who lives next to property where a planned solid waste transfer station will be constructed, voices his concerns Thursday at a meeting by the Oklahoma Department of Environmental Quality.

Many residents living near the Ada Municipal Landfill are unhappy about a planned waste transfer station, and voiced their frustration at a public meeting held by the Oklahoma Department of Environmental Quality (DEQ) Thursday at the Irving Community Center.

One resident became emotional as she spoke of problems she and other nearby residents said they have endured over the years.

The meeting was held in regard to a “Tier II application and Solid Waste Draft Permit for the City of Ada Transfer Station.”

The transfer station is needed because the landfill is nearing capacity and waste will have to be transferred to another landfill, according to Ada City Engineer Gary Kinder.

The transfer station is proposed to be located in the NE/4 of the NW/4 of Section 24, Township 4N, Range 5E, Pontotoc County. The land is located just west of -- and would adjoin -- the city’s current landfill, located on County Road 1520 west of Ada.

Kinder was first to speak at the meeting, saying the life of the Ada landfill is getting shorter and shorter, and it makes more economic sense to create a transfer station rather than driving garbage trucks long distance to dump refuse.

However, for many residents attending the meeting, the problem isn’t the creation of a transfer station, it’s the location. Many in attendance said they have put up with hardships due to the current landfill, which, they said, was only supposed to be used for about 13 years from the time it was created in the 1980s.

About 15 residents and a couple of attorneys attended the meeting, and several not only voiced opposition to the transfer station, but listed a slew of problems they’ve had with the current landfill over the years.

Craig Whipple, a resident whose land borders the planned transfer station property on three sides, expressed his frustration with the ongoing issues he said he’s dealt with over the years.

“13,140 days is how long I’ve had to put up with this dump,” Whipple said. “That’s 36 years. Like Gene (Thomas, a resident who spoke previously) said, 13 years and this thing was supposed to be done. And it’s still going.”

Whipple detailed some of the problems.

“Over the years I’ve had to endure so much it’s not even funny,” he said. “I’ve had my mailbox knocked down six times, two times in the last three months. Because the (garbage) trucks that come through there are wide-open, I’m talking about the city of Ada. I called so much about it, they (garbage truck drivers) will slow down when they get to my house, then they’ll speed right back up when they get passed.”

Whipple said he has “lost several calves due to bugs because (the city) doesn’t cover the (trash in the) dump.”

Jared Easterling, an attorney representing the Whipple family, said “DEQ has been out there and cited the landfill (the city) for violations for not covering up the existing waste.”

Whipple also said he was upset that the city did not contact any of the residents living around the landfill about the planned transfer station.

“I’m pretty upset about this deal,” Whipple said. “I was a young man when this started the first time, in my 20s. My daughters were born. This is where I was going to retire. This was my home, I raised my girls there, now they want to put this transfer station in there. You can’t haul it out as fast as you haul it in, there ain’t no way, I drive a truck. And down there on that corner, the road is not suitable for 18-wheelers whatsoever.”

“I know things have to move on, but the city of Ada won’t do right,” he said. “If they wanted to do right, they would have contacted us when they started this deal, but they try to shove everything under the door and make us take it.”

Mason Scwartz, attorney for Ann Reed Scott Thompson, 91-year-old granddaughter of Ada’s founder William Jeff Reed, spoke on behalf of his client. Thompson’s property is across the road and catty-cornered from the current landfill, and directly north of the planned transfer station. She purchased her home and land before the current landfill was created.

“(She) thought it was going to be her dream home,” Schwartz said, “and a few years later, they put the landfill in. It kind of changed everything, quite frankly. ... Since the landfill went in, she’s been dealing with the common nuisances that come with living directly across from the landfill. Namely traffic issues, noise, odor, and those kind of issues that have substantially impaired for 30 years now her ability to fully use and enjoy her property the way that she otherwise would have if the landfill was not there.”

Scwartz said all the problems Thompson has been experiencing are going to get worse with the new transfer station.

He mentioned some of the issues the residents along the county road have had to deal with. He indicated the road is a simple county road which is not meant to handle the kind of traffic the landfill brings with it.

“Now, what we have is flat tires, nails, trash, dust, noise, there’s been speeding issues with the trucks,” he said.

Schwartz indicated having the transfer station at its planned location will exasperate the problems residents have endured.

Schwartz said it would be better if Ada’s new transfer station was constructed adjacent to a highway, and cited some examples, such as Atoka and Stephens counties.

“What you normally see is these are located near or adjacent to major state highways,” he said. “That way, trucks are getting in and off, they’re not putting a lot of impact on residential areas or rural areas that are not meant to take that type of load, that type of frequency. In my opinion, (the landfill/transfer station) is located in an area that is really not set up to manage the type of traffic that’s being put on it. It’s been that way for some time, and now this will potentially make it worse.”

“Because of the way that this property is set up ..., this is property that is five miles from the core of Ada, and it’s essentially been annexed on an island, you don’t have that responsibility that you might have ... when it’s located in a city, or on the fringes of a city, to take care of its own roads,” Schwartz said. “This is a county road that they can essentially use, and abuse more or less, and have the state or whoever it is pay for it whenever they feel like it. The problem is, Ada and its citizens are not the ones being directly impacted by it, it’s the property owners directly adjacent to it out here on unincorporated land.”

Another resident who lives along County Road 1520, Judy Hanks, became emotional when speaking about the situation.

Hanks also spoke about the dust on the road as being horrendous.

“If you’re out in the yard, and those (garbage) trucks come barreling by, and I’m talking about barreling, I mean they don’t slow down, they go as fast as they can go. And when they come by, if you’re out, sometimes you can’t even breathe the dust is so strong, it’s so heavy.”

Another person who lives near the landfill, Chad Bateman, said he has had problems as well in the four years that he has lived there.

“I’ve had to deal with not only the trash trucks, but the individuals who bring their trash in and out of the city landfill, but countless flat tires (from things such as nails that fall onto the road),” he said. “Probably two to three (flat tires) a month.”

Bateman also complained that his water meter is across the road from his house, and when the line broke once before, he had to dig up the road to repair it. He said with so many heavy trash trucks going over it, he believes the line will eventually break again. And, he said that the cost to relocate the water meter to his side of the road would cost $2,500.

He said he has two young children, who he doesn’t want playing outside due to the traffic and the dust.

Scott characterized the transfer station permit application as “Ada’s request to operate yet another dump at my mother’s expense.”

Scott spoke about his family’s legacy, which dates back in Ada and the area since the 1800s.

“And the city has quite literally been dumping on that legacy for the last 30 to 35 years,” he said. “And, as others have presented, that was intended to last 10 to 15 years, it’s now exceeded that, doubling. And as others have said, that ‘joy’ will continue if this permit is authorized.”

Scott asked that the DEQ deny the city’s requested permit, and encourage the city of Ada to find “a property that is better suited, that spreads the burden of the dump, and what the permit says, or at least the notice for this public meeting said ‘150 to 200 tons of solid waste transferred daily,’ let’s share that burden with others in the county and put this somewhere else, where it doesn’t interfere on these people who have suffered it for 35 years.”

Hillary Young, chief engineer for land protection division at DEQ, cautioned that the DEQ can only enforce certain issues.

“Please keep in mind that DEQ is bound by its regulations and statutory requirements,” she said. “So if there is a particular problem that is not regulated by DEQ, we can’t enforce it.”

One person in attendance asked Young if there were any cases where they denied an application to any entities that had had ongoing violations.

“We will not issue a permit if there are current violations at a facility,” Young said. “But once they get the violations resolved, ... once a facility is in substantial compliance, we could issue the permit at that time.”