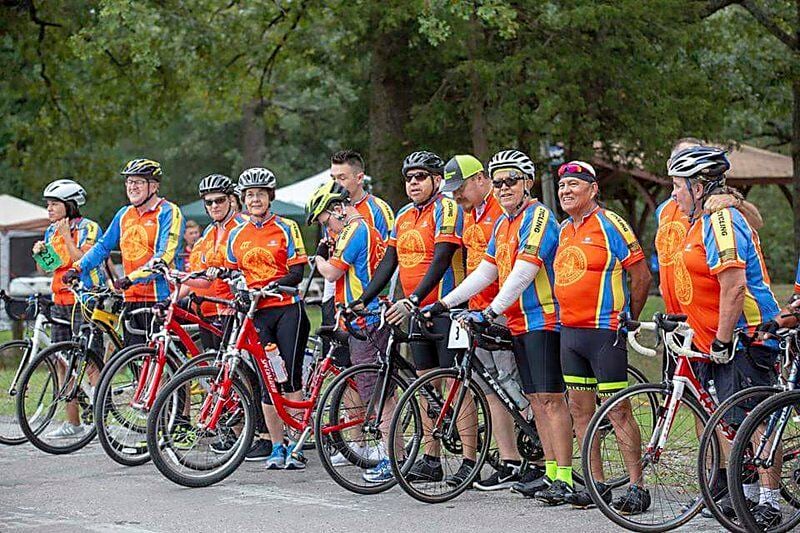 David D. Atkins is a founding member of the Chickasaw Cycling Club. As a citizen at-large, he finds the time to ride with the club at least once a year, especially the Pontotoc Pursuit in Ada, Oklahoma. 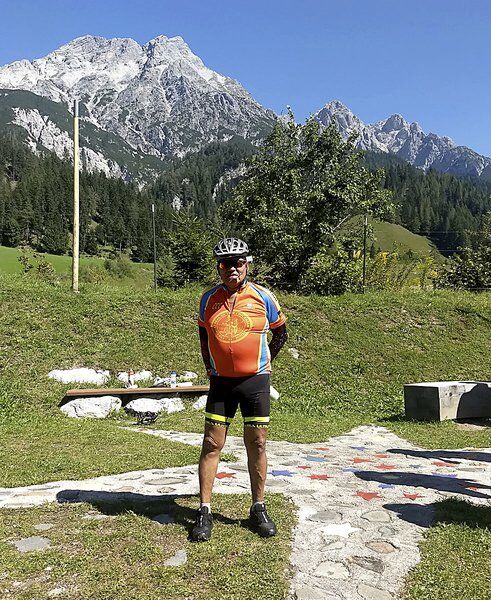 David D. Atkins is a founding member of the Chickasaw Cycling Club. As a citizen at-large, he finds the time to ride with the club at least once a year, especially the Pontotoc Pursuit in Ada, Oklahoma.

For World Mental Health Day Oct. 10, many are thinking of ways to improve their lives. It has long been known the benefits of physical activity aid not only the body, but the mind as well. For 73-year-old Chickasaw elder David D. Atkins, cycling has become a spiritual experience.

“It’s a time when you are out clearing your head,” Atkins said. “It’s a meditation time and my prayer time. It is mind, body and spirit.”

Atkins grew up in Stonewall, Oklahoma. While his life has taken him all over the world, he feels a special connection to the Chickasaw Nation and Oklahoma. Currently living in Albuquerque, he comes home as often as he can. He has taken part in the Oklahoma Freewheel, the annual cross-state bicycle tour of Oklahoma, from 2014 thru 2019. He was not able to ride in 2020 due to COVID-19.

“There is no better way to see the beauty and learn the history of a place than on a bicycle,” Atkins said.

Always an avid sportsman, Atkins has a natural inclination for physical activity. Long distance running was originally his sport of choice. He was walking in the shoes of his eldest brother, Eugene, who was an accomplished boxer, wrestler and track star at Chilocco Indian School, the Indian boarding school in north-central Oklahoma.

Growing up during a time when speaking the Chickasaw language was not socially acceptable, Atkins experienced his share of obstacles and sorrow. He is a Marine veteran who loaded ordnance on aircraft during the Vietnam War. Later, he lost his wife, Gloria, in an automobile accident and his mother, Rosie, in the same year. He had to discover ways to keep going.

During his early post-military time, Atkins bounced around and got caught up in a fog of drugs and alcohol. He held on, he said, to the spirituality and values instilled in him during his youth by his parents, Jack and Rosie, and Hickory Hill Baptist Church near Fittstown, Oklahoma.

Over time, Atkins noticed the vital roles athleticism and spirituality played in bringing him back to balance when life threw obstacles in his path. His personal anecdotal accounts are backed up by science.

Ryan McMahan, licensed professional counselor at the Chickasaw Nation and a member of the Chickasaw Cycling Club, stated that cycling has been shown to improve mood, decrease stress, sharpen thinking and improve sleep. Cycling also releases a brain protein which protects neurons and helps new ones develop.

“Cycling has been my main self-care and stress outlet during the COVID-19 pandemic,” McMahan said. “I often tell clients we all have a stress cup. When the cup is full of water all it takes is one drop to cause it to spill over the edge, and we as people are very similar. For me, cycling has been a way to empty my cup.”

Atkins uses physical activity to help drive him to complete his goals. As a younger man, he set a goal to obtain his degrees in higher education. He attended Oklahoma Baptist University, the University of Oklahoma and Lesley College, in Cambridge, Massachusetts. He earned a bachelor’s degree, Master of Social Work and Master of Science in Management, respectively, from those institutions.

To reward himself for graduating from Lesley College, Atkins ran the Boston Marathon in 1994. It was his last marathon. Previously, he had completed the Pikes Peak half-marathon ascension, as well as other marathons and half-marathons in New Mexico, Phoenix, Colorado, and Seattle.

His time running caused extensive wear and tear on his knees. Unable to continue running, he began looking for alternative ways to work his body. He found cycling later in life.

“Cycling is easier on your joints,” Atkins said. “It’s sort of like running. Your body adjusts to whatever it needs to do. You learn how to get fit, how to choose the proper bike, shoes and other equipment. It makes the ride more enjoyable when you put that all together.”

When Atkins retired in 2013 from the Indian Health Service after 35 years as a clinical social worker specializing in substance abuse, he found a surplus of free time. He focused on cycling for personal fitness and became a member of the New Mexico Touring Society.

He completed two rides in Europe with the New Mexico Touring Society, from Vienna, Austria, to Budapest, Hungry, and Innsbruck to Salzburg, Austria.

Atkins is also a founding member of the Chickasaw Cycling Club. As a citizen at-large, he finds the time to ride with the club at least once a year, especially in the Pontotoc Pursuit in Ada, Oklahoma. This ride has been canceled this year due to Covid-19.

“We want to get more youth and middle aged people involved with the Chickasaw Cycling Club,” Mr. Atkins said. “We do this by doing group rides. We don’t want just competitive riders, but people who do it for fun and fitness as well. I would like to acknowledge the support that Governor Anoatubby’s office has provided to me and the Chickasaw Cycling Club in our cycling adventures.”

He is a role model for Chickasaw youth, veterans and elders to get out and be involved in physical activity. Atkins believes physical activities assist in the prevention of chronic health conditions such as diabetes, heart disease, hypertension and obesity, which can develop later in life.

“You’re not too old to start doing some type of physical activity,” Atkins said, citing his own experience taking on cycling as a retiree.

Cycling is both a group and individual activity. While others may have been struggling with gyms being closed and staying active during COVID-19, Atkins has continued his regimen of cycling nearly 150 miles a week. He is able to maintain social distancing on his bicycle and continue his physical activity both by himself and with friends.