A picture from above of Bill Hinkle Field the site of Friday night’s contest between No. 10 Ada and No. 3 Tuttle. Kickoff is scheduled for 7 p.m. 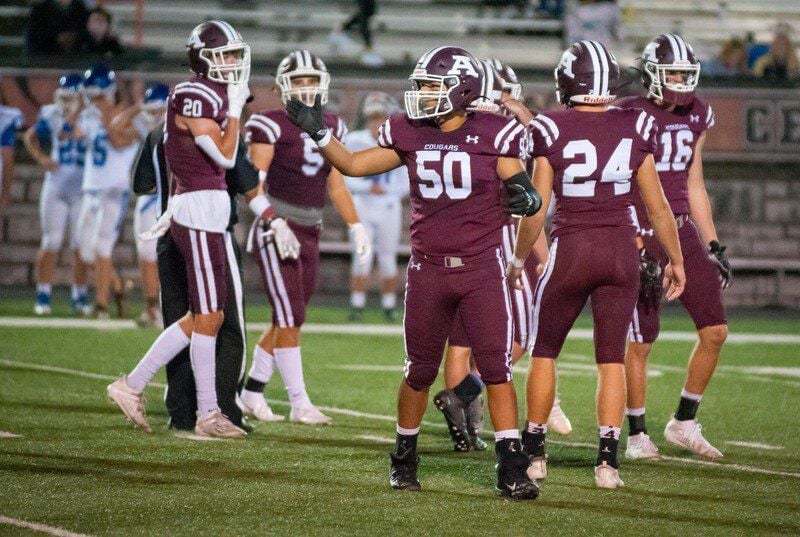 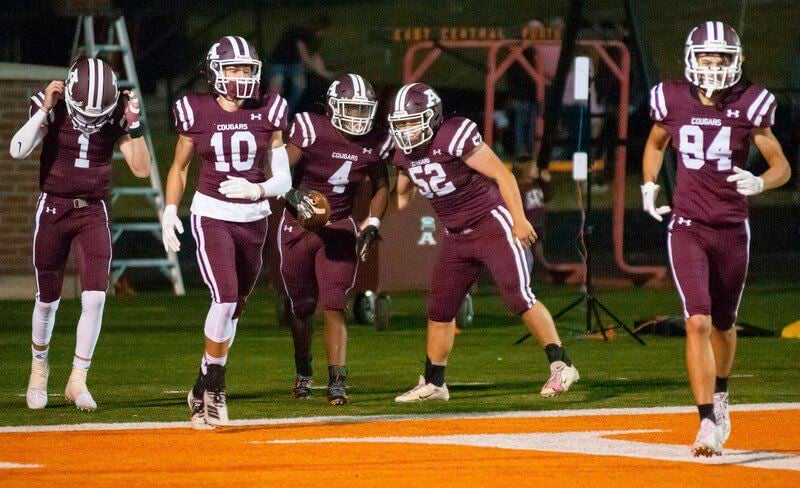 Ada players Carter Freeland (1), Logan Cook (10), Earltuan Battles (4), Caden Balthrop (52) and Andrew Hughes (84) celebrate in the end zone after a Cougar touchdown during last week’s 49-7 home win over Harrah. The 10th-ranked Cougars travel to No. 3 Tuttle Friday night for a big District 4A-2 showdown with the host Tigers.

A picture from above of Bill Hinkle Field the site of Friday night’s contest between No. 10 Ada and No. 3 Tuttle. Kickoff is scheduled for 7 p.m.

Ada players Carter Freeland (1), Logan Cook (10), Earltuan Battles (4), Caden Balthrop (52) and Andrew Hughes (84) celebrate in the end zone after a Cougar touchdown during last week’s 49-7 home win over Harrah. The 10th-ranked Cougars travel to No. 3 Tuttle Friday night for a big District 4A-2 showdown with the host Tigers.

The Ada High football team appears to be trending in the right direction. And that’s a good thing heading into their Week 8 showdown at No. 3 Tuttle Friday night.

Kickoff is scheduled for 7 p.m. at Bill Hinkle Field.

After a rough 33-0 loss to Blanchard, the Ada Cougars reeled off back-to-back quality wins — a 7-6 overtime win over John Marshall and a 49-7 victory over Harrah on fall break.

“We played our most complete ballgame of the season in all phases. We had explosive plays in all three phases,” Ada head coach Chris Berus said of last week’s win over Harrah.

“You can look back to the refocus after being dismantled by Blanchard. Our coaches took it upon themselves to be better and the kids did the same,” he continued. “We collectively began the process of striving to improve quickly. I’m very proud of our kids and coaches to accept that challenge and know that we can be better.”

The Cougars may have to be at their best Friday night to hang with the high-powered Tigers.

Unbeaten Tuttle is 7-0 after a forfeit victory over Classen SAS last week. Tuttle has run roughshod over three straight District 4A-2 foes — a 42-21 win over Cushing, a 40-7 win over Tecumseh and a 35-6 victory over Harrah.

Due to the forfeit, The Tigers had an extra week to prepare for the Cougars.

“There’s no better time kind to see where you’re at again. After a couple of weeks of improvement, you’re going to play preseason, the best team in the district,” Berus said.

“They play extremely hard. Their schemes are very sound. They try to put you in a bind in all phases of the game,” he continued. “We’re super excited about preparing for an opponent like this at this time of the season. It lets you know where you stand with the best of the best. We’re looking forward to going to Tuttle Friday night and hope to compete at a high level.”

Berus said Tuttle can hurt a defense in many, many ways on offense.

“They’re a multiple spread team. They’re going to be in everything from a two-tight, one back and they’ll also go four-wide on you,” he said. “There’s not really many weaknesses in what they do offensively just because they’re so balanced. You enter all their information in and right-left, it’s balanced, strong-weak, it’s balanced, run-pass, it’s balanced.”

Senior quarterback Jayden Seebold (6-3, 185) runs the show. He’s completed 50-of-81 passes for 817 yards with 12 touchdowns and just one interception. Seebold only ran with the ball 19 times, but Berus said that can be misleading.

“They have a big quarterback. They don’t design a whole lot of runs for him, but the ones they do design he takes full advantage of,” he said.

Three different players have been in the running back mix for Tuttle, but lately, sophomore Tyler Woodson (5-9, 155) has carried much of the workload. He has 137 carries for 825 yards and eight touchdowns.

“Early on they were running back by committee, but (Woodson) seems like their go-to guy right now,” Berus said.

The Tigers have also utilized two tight ends in their passing attack — junior Tylor McCarthey (6-6, 220) and senior Bode Brooks (5-11, 195). That duo has combined for 10 catches for 93 yards and three touchdowns.

“They’re going to play zone coverage in the back end and let you have some stuff underneath but it’s just an attack-style defense,” he said.

Three junior linebackers lead the charge defensively for Tuttle. Gunner Kerr (6-0, 180) tops the list with 68 tackles and a fumble recovery, CJ Conner (5-11, 185) is next with 46 tackles, while West has recorded 41 stops.