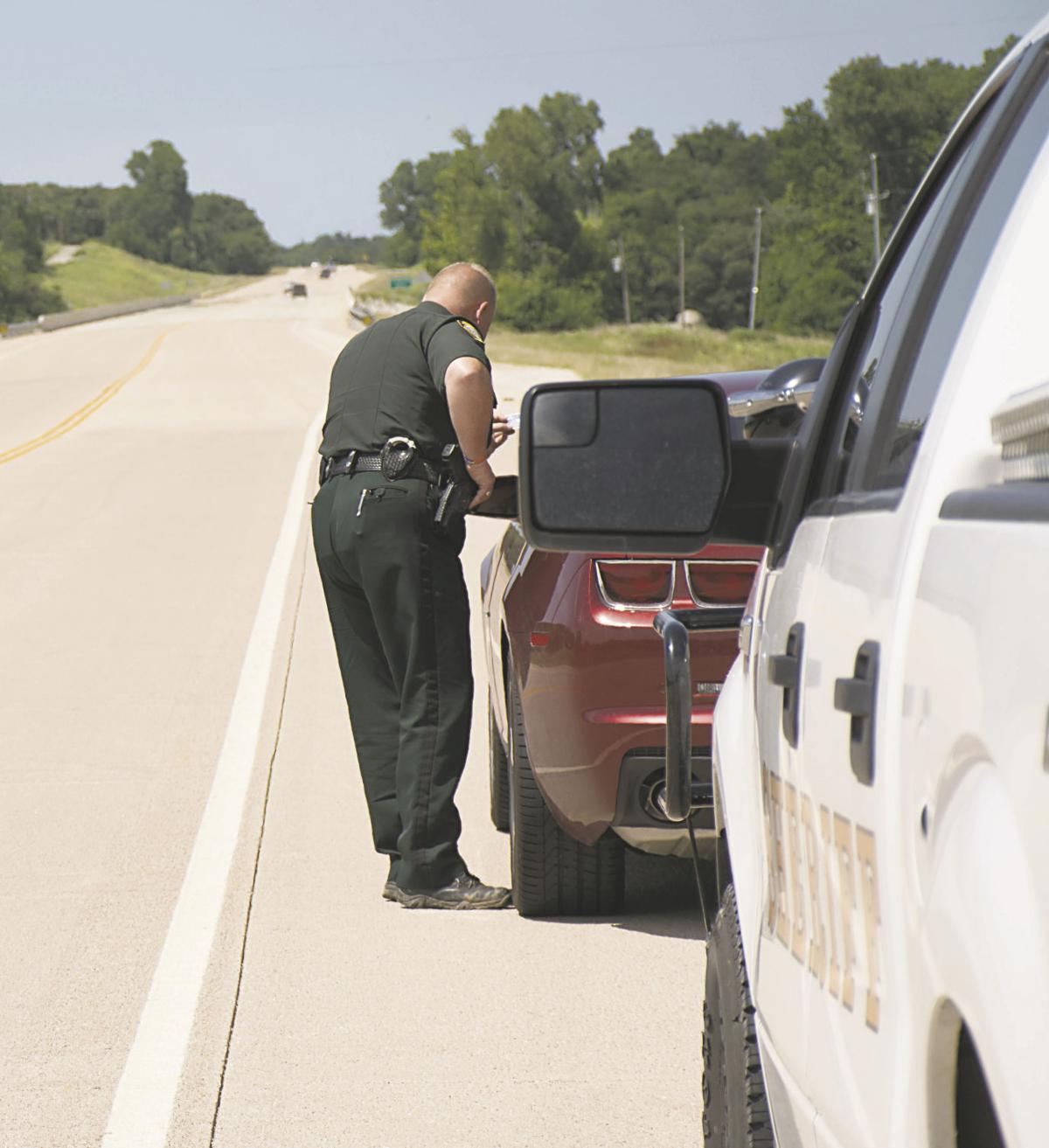 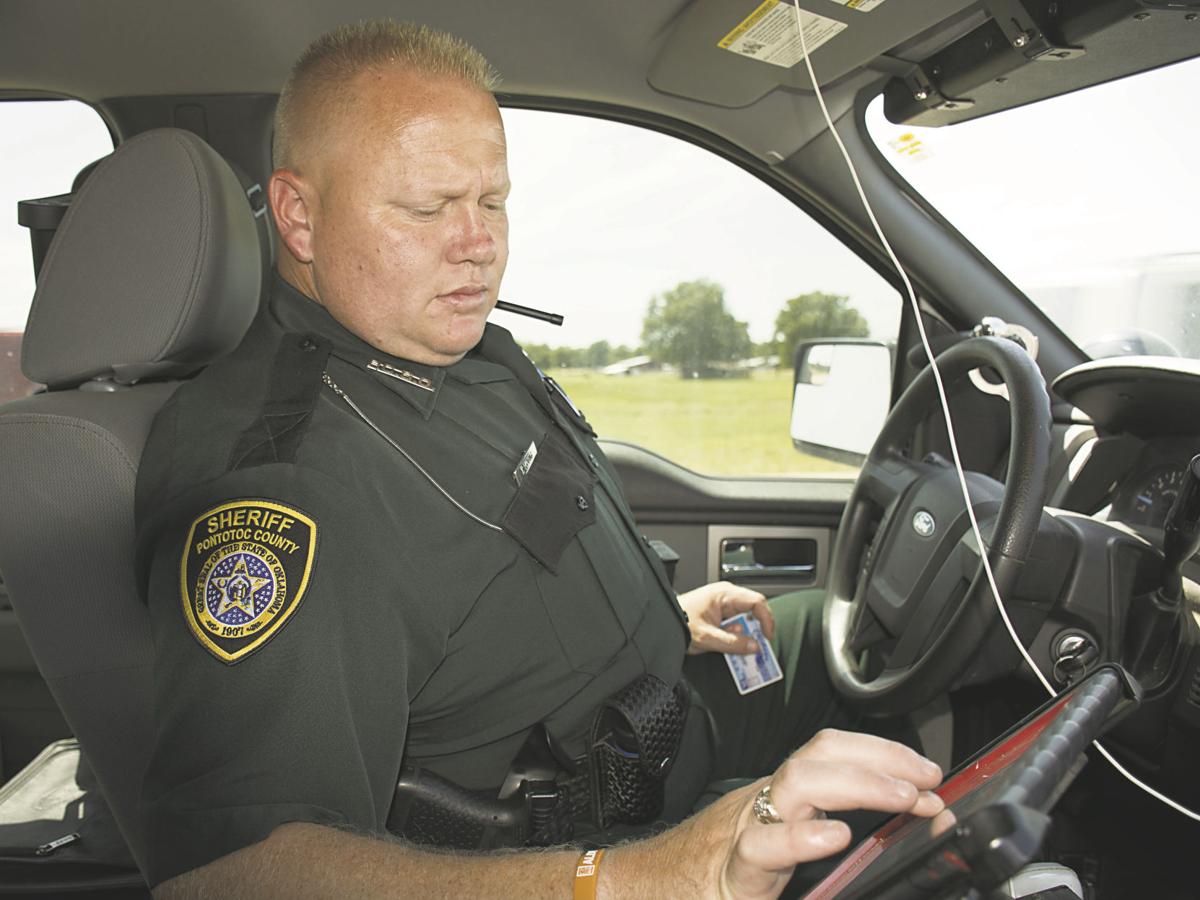 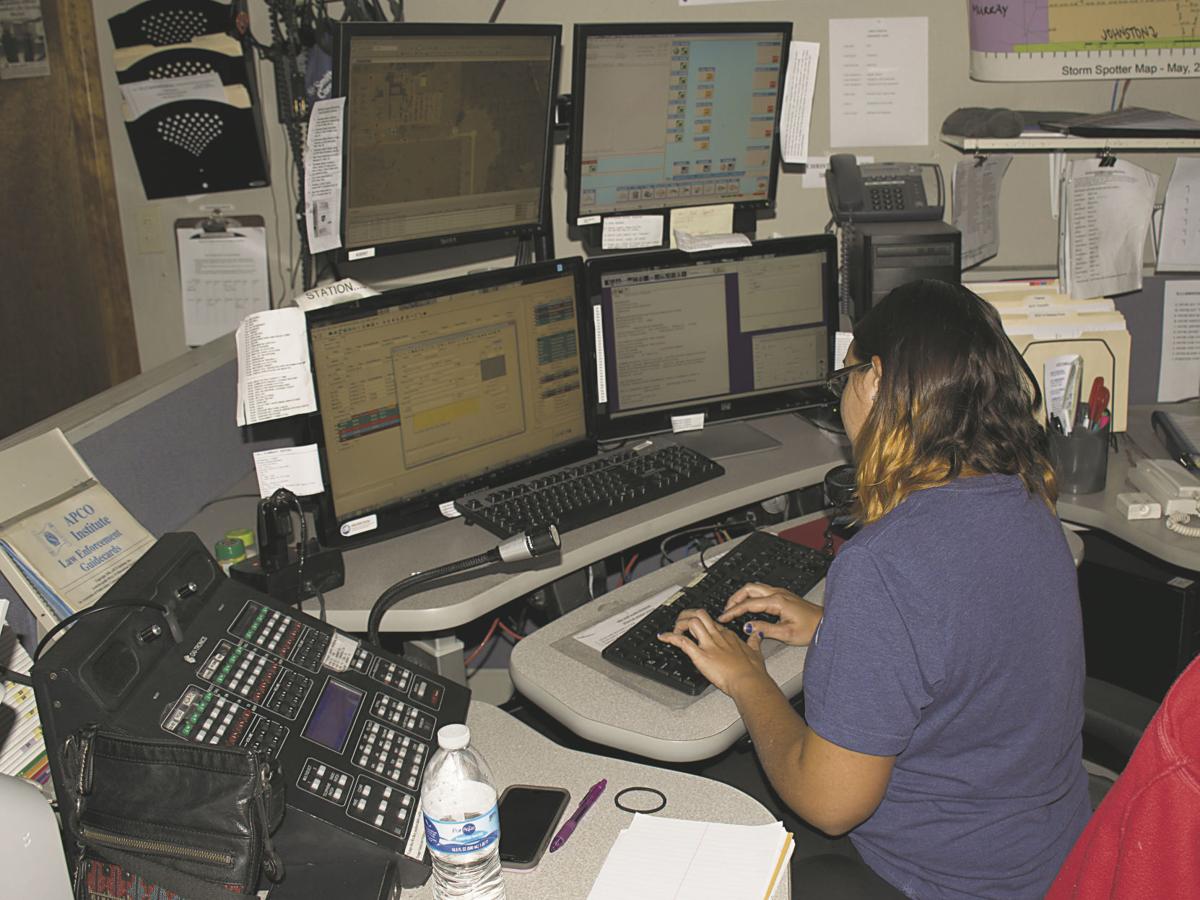 Pontotoc County is a rural expanse covering 725 square miles, populated by more than 19,000 people and containing over 800 miles of surface roads.

At the county sheriff’s office, the agency usually has, at best, three people on a given shift responsible for maintaining law and order in that expanse for a 12-hour period, often without help.

“We often refer to ourselves as the green machine,” Sheriff John Christian said. “The thin blue line, while taken up by most law enforcement, really always referred to a police officer. They traditionally wore blue uniforms, thus the blue line, while sheriff’s deputies often use other colors.”

When it comes to the thin line metaphor, the term is no euphemism.

“I have 15 deputies,” Christian said. “Two of those are assigned to the courthouse. One is assigned to respond to changing needs, such as prisoner transportation. That leaves 12 field deputies. They do patrol, serve papers, conduct investigations — all law enforcement operations.”

Those 12 deputies are scheduled to provide as much coverage as possible.

Deputies work rotating schedules of three days on, three days off, then two days on, two days off. The schedule repeats each period. Every 90 days deputies switch from days to nights.

“At full-force, that’s three deputies per shift. The problem with that is, you have sick leave, vacation and 25 hours of mandatory training each year, which we try to exceed. You have holidays in there — they still get their holidays, they just don’t get them on the actual holiday. When you add up all the time they’re allowed or have to take off, you start reducing the number of deputies you have working at any given time,” Christian said.

Christian said the majority of the time — roughly 75 percent of it — his office is at full-force. The rest of the time they are down to only two deputies on duty.

“We may have a call in Asher and a call in Fittstown at the same time and those are on totally opposite ends of the county. So, you may have two deputies on and those may be pretty severe calls, which can result in both deputies responding by themselves,” Christian said.

Christian said county law enforcement has always been stretched pretty thin, but in the last few years, he has noticed an increase in the severity of the calls his deputies answer. He said the changing nature of the calls they answer raises the risks for deputies who have to answer those calls alone.

“Most people don’t understand that when we knock on a door, we don’t know what’s on the other side of that door. When we go to someone’s home, which may be an armory, and knock on that door not knowing anything other than we got a call of a disturbance, you never know what’s going to happen,” Christian said.

Deputy Todd Young has been in law enforcement for 13 years. He joined the PCSO Feb. 17, 2015, following in his father’s footsteps.

Young said the Sheriff’s Office has come a long way since his father’s era.

“I remember when a new car had 80,000 miles on it when you got it and the back seat had a light bar and some red and blue flashers in it. They would tell you to take it home and wire it up. That was a common thing back then,” Young said.

Young said this is the first time he has ever seen PCSO order new cars.

“Everybody’s got a relatively new unit that was sent out to a professional shop to have everything installed and decals put on,” he said.

An eight-hour ride along Saturday with Young illustrated how quickly calls arise in disparate locations across the county.

“For today’s shift, there are three deputies on. We’ll cover all the calls in the county and we’ll assist inside the cities if they need us. There’ll be three deputies for 725 square miles of the county. For reference, Ada’s got five officers on duty right now for the city,” Young said.

The morning began with a patrol of the southeast corner of the county. Young drove out to the Coal County line, traversing small, two-lane county roads, occasionally cutting through more narrow, one-lane oil lease roads — private roads leading to areas the county is still responsible for policing.

Many of these roads were in serious need of repair and required slow, careful navigation to safely pass over. Getting out of the areas served by these roads is not something that happens quickly.

Using a system called GeoSafe — a GPS-based tracking and information management system employed by the sheriff’s office, Young is able to track the location of all deputies on patrol, as well as units from smaller municipalities using the system.

The majority of the morning, the other PCSO units were often as far as 50 miles away from Young’s location — in some cases, further. As units answered calls by themselves, Young stopped and monitored the call notes and their location, frequently planning the fastest route to reach his colleagues should they ask for help.

“Sometimes we don’t have the luxury of being able to ask for help — things happen way too quick,” he said, adding that help may not be close at hand.

“Let’s say you have a deputy at the office taking a report — a report that’s pretty severe in nature, so he can’t leave, He has to stay,” Young said. “Then south of Asher on state Highway 3W some neighbors arguing over a fence turns into a physical fight. So if you’ve got three deputies on duty, the two available deputies head to Asher. Then while we’re out there dealing with that, a husband and wife get into it and the husband starts beating up on the wife in west Jesse, and people wonder why it takes so long for a deputy to get there. Do you know how long it takes to drive from Asher to west Jesse? With traffic and construction and the bridges…”

By lunchtime, Young had covered hundreds of miles of roadway in the southern half of the county, never treading the same ground twice.

One of the three deputies on duty was called away shortly after lunch. He would be out of service for the next three to four hours picking up prisoners in Oklahoma City and returning them to the Justice Center. This left two deputies covering the entire county.

After a brief stop at Central Dispatch, a joint communications center serving law enforcement and fire service agencies in the county, Young was back on patrol, this time covering the northeastern corner of the county.

Young conducted a traffic stop in Byng, then answered a call from a Byng resident where he helped the man navigate a civil dispute over the location of a lagoon on his neighbor’s property. While answering that call, the remaining deputy responded to a report of a suspicious person west of Ada.

“Now you see how far away he is on the map,” Young said as he pointed to the iPad display in his vehicle. “You see he’s there, and we’re all the way over here (at least 20 miles away). If he calls for help, it’s going to take us 20 to 30 minutes to get to his location.”

Young completed his call and headed toward the other deputy, but the deputy cleared from his call before Young arrived.

The deputies completed their shift Saturday without any serious incidents occurring. Throughout the day they remained far from one another, physically, but always aware of where each other was and what everyone was doing.

This is the first in a series of articles looking into crime in Pontotoc County and how law enforcement agencies and the courts cope with diminishing budgets and increasing demands.

PLANO [ndash] John James Fleet II, passed away on Aug. 2, 2021, age 81, in Plano, Texas. He showed great courage and faced his final days in the loving company of his family. John was born in Houston, Texas, raised in Dallas, lived in Ada, Oklahoma, and Plano, Texas. John married Geraldine C…