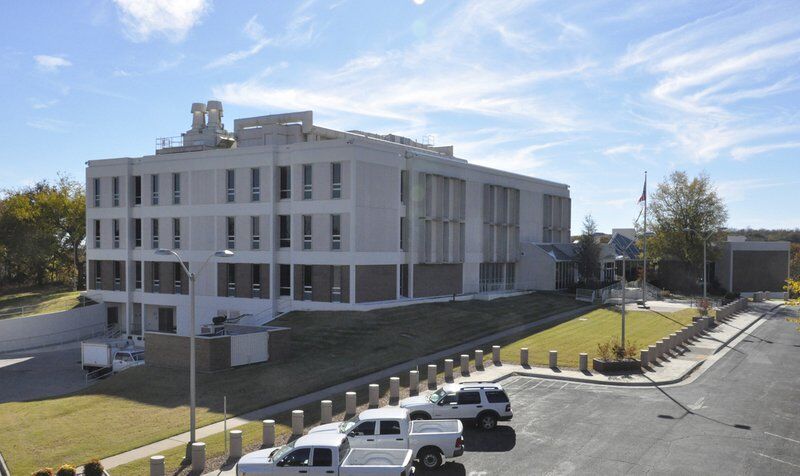 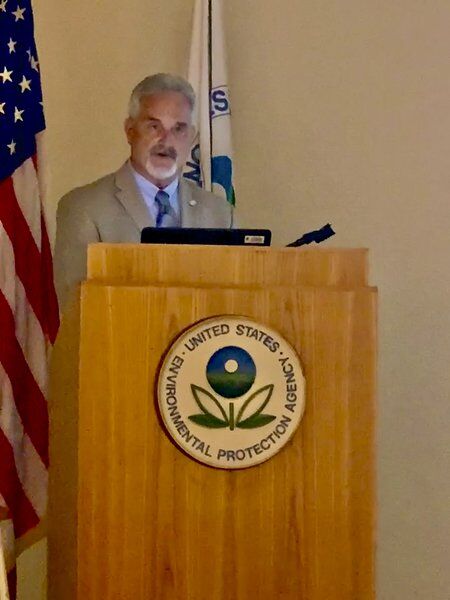 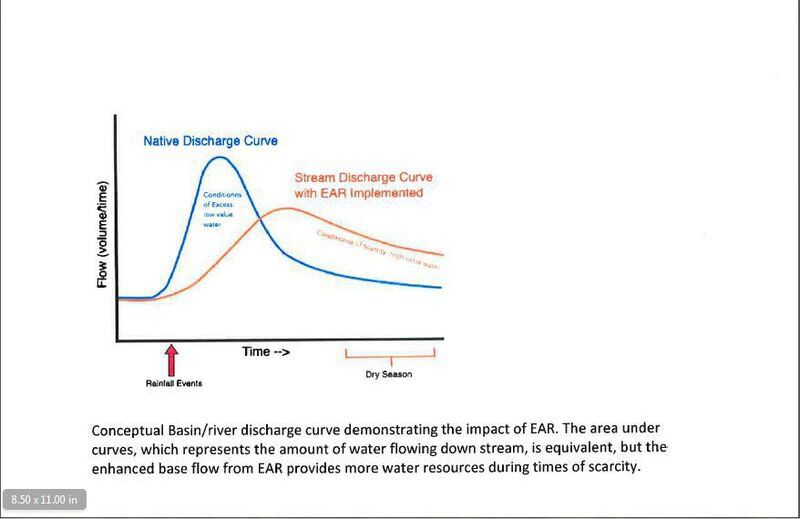 Conceptual Basin/River discharge curve demonstrating the impact of EAR. The area under curves, which represents the amount of water resources during times of scarcity.

Conceptual Basin/River discharge curve demonstrating the impact of EAR. The area under curves, which represents the amount of water resources during times of scarcity.

On June 9th the Robert S Kerr Environmental Research Center hosted more than 40 scientists, engineers and program managers from around the nation, to review the US Environmental Protection Agency’s efforts to develop safe and practical methods for storing additional water supplies in aquifers. RSKERC serves as the national lead for the USEPA’s Office of Research and Development for this effort.

“Introduction of water to the subsurface can play a significant role in helping certain Oklahoma communities meet their increasing water demands, especially during the times of drought. City of Ada’s prospective enhanced aquifer recharge project is the first of its kind in Oklahoma and will help streamline the process for other municipalities,” according to Dr. Saba Tahmassebi,

Agency Chief Engineer of the Oklahoma Department of Environmental Quality.

The “Enhanced Aquifer Recharge Stakeholder Update” was an in-person and virtual gathering of representatives from the USEPA, Chickasaw Nation, Oklahoma Department of Environmental Quality, Oklahoma Water Resources Board, US Geological Survey, Oklahoma State University, East Central University, and the City of Ada. To date the stakeholders have invested more than $4 million in the project, which is being conducted on City of Ada property near Bryds Mill Spring. The goal of the project is to create guidelines and best practices for implementing enhanced aquifer recharge that are both effective and protective of water quality.

“The City of Ada is proud to be a partner in this high visibility national effort. The potential to create new water resources is something that will provide benefits on a national scale, not just here in Ada”, says City Manager Cody Holcomb.

To date aquifer storage projects have predominantly involved the annual injection and storage of excess treated drinking water, and then withdrawing the same water during times of high demand. Typically, this type of implementation requires significant public infrastructure investments. Enhanced Aquifer Recharge, or EAR, is designed for rural and undeveloped environments, with minimal infrastructure costs and landscape impacts.

According to Dr. Guy Sewell, ECU professor and City of Ada project leader, “EAR differs from traditional implementations of Aquifer Storage and Recovery in that overland flow from significant rainfall events is captured by small dams and allowed to infiltrate, rather than runoff.” Sewell explained that the net effect, within a basin, is the conversion of stormflow (not to be confused with stormwater) to baseflow. Baseflow, which is ground water discharging into stream beds, is responsible for most of the water we see in the stream during drier months. Stormflow peaks (potentially flood water) are converted to slow release (baseflow) over long time periods. The net amount of water discharged is equivalent, but the peaks (flood) are reduced, and the time of the discharge curve is much longer. The long-term impacts are more ground water and surface water resources, and enhanced spring/river flow during dry periods.

The current plan for EAR is to create multiple small recharge structures in series, to slow runoff from major storm events and allow it time to infiltrate into underlying aquifers, rather than continuing downstream and creating flooding conditions. This is a modern version of the flood control watersheds that Oklahomans have used since the 1940s, with the added benefit of storing water in aquifers instead of on the surface where it is more susceptible to evaporation and contamination.

“EAR represents both a practical solution to the Nation’s need for additional water resources, and as a resource management approach to aquifer sustainability” says Dr. Sewell. Ground water levels are continuing to decline across the nation from decades of chronic over withdrawal. Augmenting drinking water supplies through recharge into aquifers represents a cost-effective way (as compared to addition of reservoir storage or desalination) of increasing the availability of water, due to seasonal scarcity and/or climate driven uncertainty.