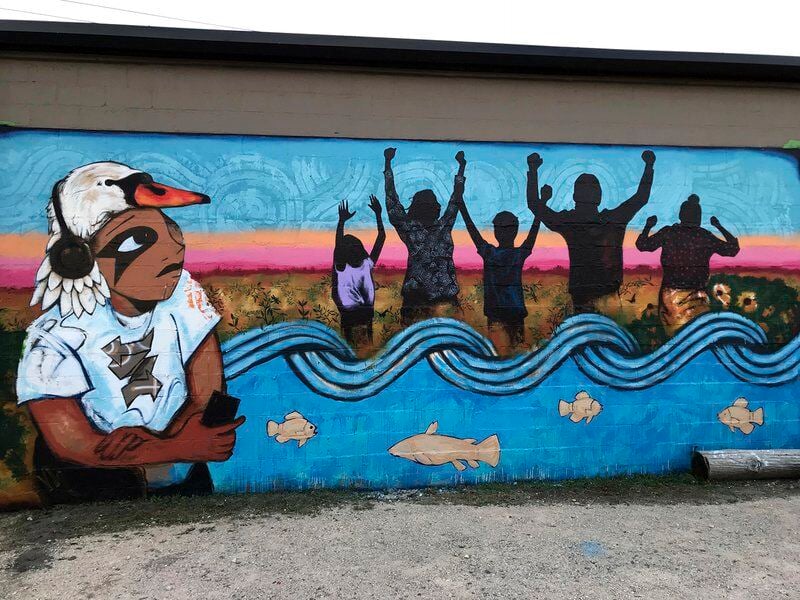 Brent Greenwood recently completed work on a mural in Sulphur intended to champion the Define Your Direction campaign and its impact on area youth. The mural is located on the wall of the 3rd & Broadway boutique on 3rd St., Sulphur. 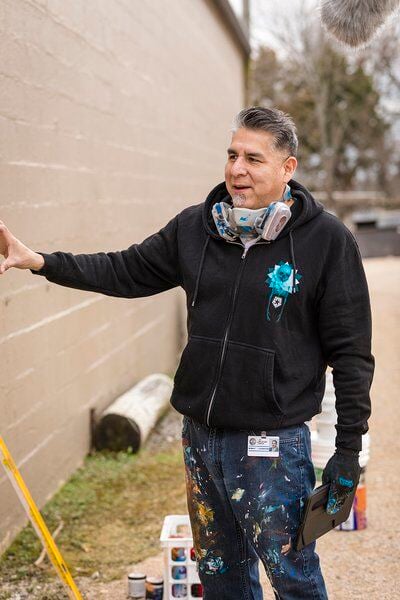 Greenwood plans his next steps as he works on the mural.

Brent Greenwood recently completed work on a mural in Sulphur intended to champion the Define Your Direction campaign and its impact on area youth. The mural is located on the wall of the 3rd & Broadway boutique on 3rd St., Sulphur.

Greenwood plans his next steps as he works on the mural.

Greenwood said the painting is an engaging way to enrich the community with beauty and meaning. In this case, the meaning is expressed with contemporary imagery, and centered around family and Chickasaw cultural values.

“This mural is open for interpretation while having intent,” Greenwood said. “I wanted to reinforce the positive impact that the Define Your Direction (DYD) campaign is making in the area; instilling pride in oneself and community.”

The mural is easily spotted by those strolling downtown. Greenwood said he thinks having both of his Sulphur murals facing the downtown plaza stage adds to the overall aesthetic of the area.

“It adds a nice colorful vibe, while complementing the nostalgic downtown feel,” he said.

DYD made this mural possible and its message is at the heart of it.

DYD is a campaign and movement inspiring teens and young adults to be leaders in their communities while living healthy lifestyles. The aim is to steer them toward positive futures, and away from underage drinking and prescription drug abuse.

“By educating teens and young adults about the dangers of both subjects, we are creating a generation of students eager to participate in their communities, live healthy lives and be positive role models,” the group’s direction statement reads.

That’s how he decided to focus on family and Chickasaw values.

The mural features a young Chickasaw looking over their shoulder to see their family in a field of flowers cheering them on. Swirls of wind and color fill the upper portion of the mural. Tribal water designs flow through the bottom portion.

“I always want to embody energy and movement through my process. From the swirling sky, which is on both murals, to the contemplative youth and traditional Southeastern references.”

Greenwood explained that while reflecting on family, the contemplative youth reinforces hope, smart decisions and pride in one’s self. The youth is a blend of graffiti styled traditional and contemporary – as depicted by a swan headdress, shell necklace and facial marking, but also a pair of headphones.

Reflecting the purpose of the mural, the youth’s shirt displays the DYD logo.

In addition to expressing what DYD is all about, Greenwood said, as a personal goal, he hopes this public piece fosters a deeper appreciation of art for those who stop by and take it in.

DYD is grant-funded by the Substance Abuse and Mental Health Services Administration in collaboration with the Chickasaw Nation and Southern Plains Tribal Health Board.

More information can be found at DefineYourDirection.com. This includes free resources to use when talking to teens about prescription drug abuse and underage drinking.

To sneak a peek of Greenwood’s mural, pedestrians and drivers can find the boutique on 3rd St. between West Broadway Avenue and Muskogee Avenue. It is a stone’s throw away from his previous Sulphur-based mural on the side of Mahota Studios.

The boutique is owned and operated by a trio of ladies, including young Chickasaw entrepreneur Madeline Jack and her Choctaw mother Julie Jack.

“We are excited about it! It adds a lot of color,” Madeline Jack said.

A native Oklahoman and contemporary artist of both Chickasaw and Ponca heritage, Greenwood was born in Midwest City, Oklahoma. He is a graduate in fine arts disciplines from the Institute of American Indian Arts and Oklahoma City University.

His artistic journey with the Chickasaw Nation began more than 20 years ago as a tribal artist.

“I’ve been able to employ what I’ve learned over the years. We have a lot of budding young artists that just need some direction, and I know exactly where they are coming from, because I was there too,” he said.

He also maintains work as an independent artist on commission. Even early in his career as a rural letter carrier with the U.S. Postal Service serving as a means to pay bills, he worked as an artist.

“I consider myself an artist first. That’s my passion. That’s what I love to do. That’s always going to be there,” he said.

He is known for more than his murals. His figurative works in vibrant acrylic paints are a staple among his creations, but he also is known for his ledger, printmaking and mixed media art. His originals and prints adorn numerous tribal facilities and even have been applied to a Pendleton blanket sold exclusively at the Chickasaw Cultural Center in Sulphur.

As for his mural work and student mentorship, Greenwood said there are always new plans and tempting walls. He hopes to spark creativity in those who view public art as well as his students.

“Public art engages the community. It encourages and fosters the arts. It enhances the community, it spawns other projects, it leads to beautification. It’s a visual expression for the community in a public setting,” Greenwood said. “It’s free. It’s not in a museum. You don’t have to pay to see it. It’s there if you want to see it. That’s what makes public art so great.”