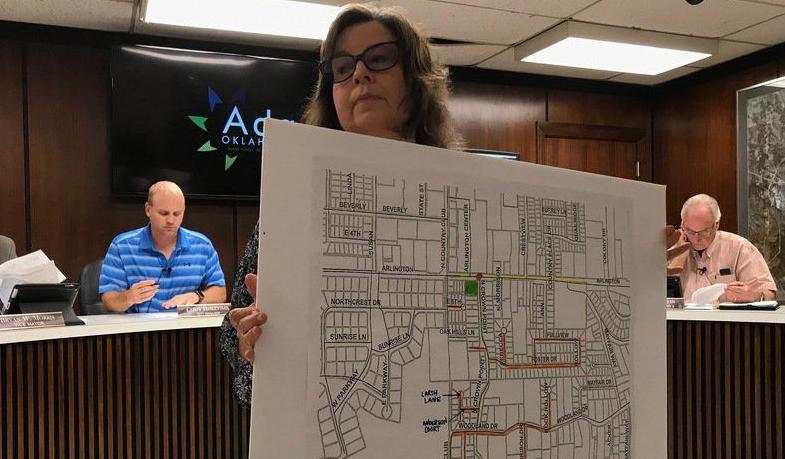 Ada Mayor Tre’ Landrum speaks during Monday’s meeting of the Ada City Council. The council split 3-2 in voting to deny a request to rezone the southwest corner of Arlington and Crownpoint. 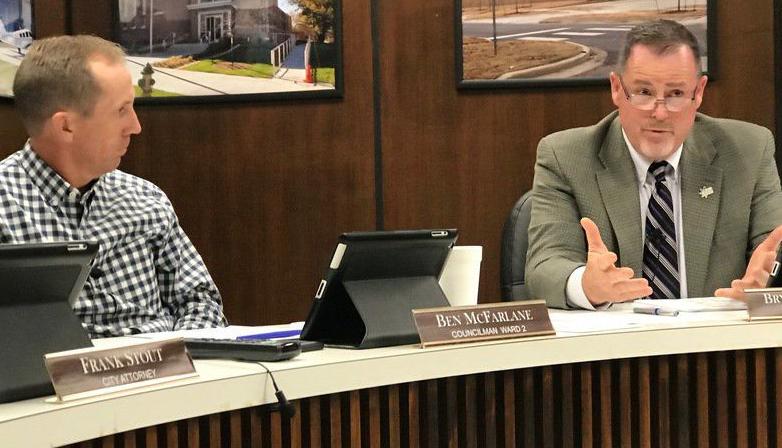 From the left, Ada City Councilman Ben McFarlane listens while Councilman Bryan Morris speaks during Monday’s meeting. The council split 3-2 in denying a request to rezone the southwest corner of Arlington and Crownpoint.

Ada Mayor Tre’ Landrum speaks during Monday’s meeting of the Ada City Council. The council split 3-2 in voting to deny a request to rezone the southwest corner of Arlington and Crownpoint.

From the left, Ada City Councilman Ben McFarlane listens while Councilman Bryan Morris speaks during Monday’s meeting. The council split 3-2 in denying a request to rezone the southwest corner of Arlington and Crownpoint.

For the second time in five months, the Ada City Council denied a request Monday to rezone the southwest corner of Arlington Street and Crownpoint Drive.

The council split 3-2, with Councilmen Ben McFarlane, Tre’ Landrum and Randy McFarlin voting to deny the request and Councilmen Bryan Morris and Guy Sewell voting to approve it.

Cornerstone sought the change so the company could sell the property to developer Rhone Bird, who planned to put a Wendy’s fast-food restaurant on the eastern three lots and reserve the remaining lots for future development.

But the prospect of putting a Wendy’s at the corner of Arlington and Crownpoint alarmed some people who live in that area. They complained that a fast-food restaurant at that site would make living in the neighborhood more difficult.

Karen Burris, who owns property in that neighborhood, urged the council to remember residents’ concerns when voting on the issue.

“Please keep us all (in mind) — even what you might consider the little people,” she said. “Because we’re the ones that live there and go in and out and have to travel down Arlington to get into town, whether it’s the bank or the post office. So please keep that in mind.”

Rita Edwards, chief financial officer of Ada Smile Place, said she had circulated a petition opposing the zoning change. She said while she was collecting signatures, she had talked to several people who live and work in the area around Arlington and Crownpoint and worried about the possible impact of a restaurant on that site.

Edwards pointed to a map of the area to support her argument that a restaurant at that site would lead to more traffic in the neighborhood.

“You can see on the map that all these people have no other effective way to go to their business, place of work, the businesses that they own,” she said.

Rhone Bird said he had taken steps to ease residents’ concerns, such as abandoning his original plan to put retail businesses on the rest of the property. Instead, he said, he had found another developer who was willing to build medical offices on those lots.

Bird also said communities that want to attract more retail businesses can’t expect those businesses to set up shop on the outskirts of town.

“That’s not how retail is designed,” he said. “Retail has to be in dense areas. It has to be where the population is.”

“We didn’t count them, and in fact we didn’t spend a whole lot of time doing it,” he said. “Because we think it is the city of Ada’s job to do what’s best for the city and not for individual people.”

Councilman Morris said the city has to provide services for its residents, and it can’t offer those services without tax revenue. He said the lot where Wendy’s would be located is in a good location, but it’s not generating revenue for the city’s coffers at the moment.

He said he would vote to rezone the corner of Arlington and Crownpoint to accommodate Wendy’s, because he thought city officials should play an active role in bringing new businesses to town.

Councilman Sewell said he did not think that corner was the best location for a fast-food restaurant, but he said the council could not favor one developer over another.

“I echo Bryan,” he said. “We did this for Vision Bank. We’re going to continue to develop Arlington.”

Sewell said the developer has responded to the council’s concerns, and the council would watch to make sure the development was handled properly.

Mayor Landrum said he was trying to balance the city’s need for economic development with the concerns of people who wanted to preserve their neighborhood.

“The question I have is, how do you reconcile the people who are planning on the current zoning and yet still look forward and say, ‘We want Wendy’s. We want you to develop in Ada,’” he said. “And yet, this is an area where we have 25, 30 people that are saying, ‘We oppose this because this is right here where we are.’

“It’s an area that I’m struggling with right now.”