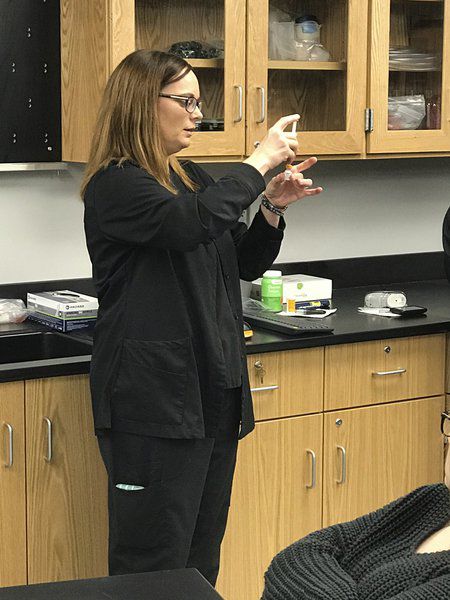 Eric Swanson | The Ada NewsMercy Hospital Ada histologist Mindy Bell demonstrates how to inject a glucagon solution to help someone experiencing a hypoglycemic episode Tuesday at Ada High School. The demonstration was part of a lesson on diabetes and how it can affect people. 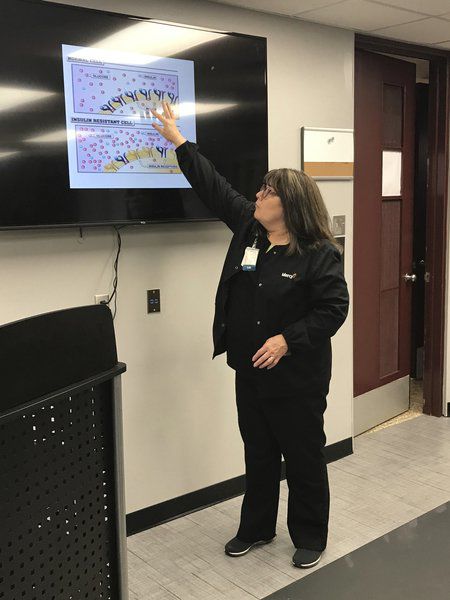 Eric Swanson | The Ada NewsLeah Babcock, director of the medical laboratory program at Mercy Hospital Ada, explains the difference between normal and insulin-resistant cells Tuesday at Ada High School. Babcock and her colleague, Mindy Bell, presented a lesson on how diabetes can affect people. 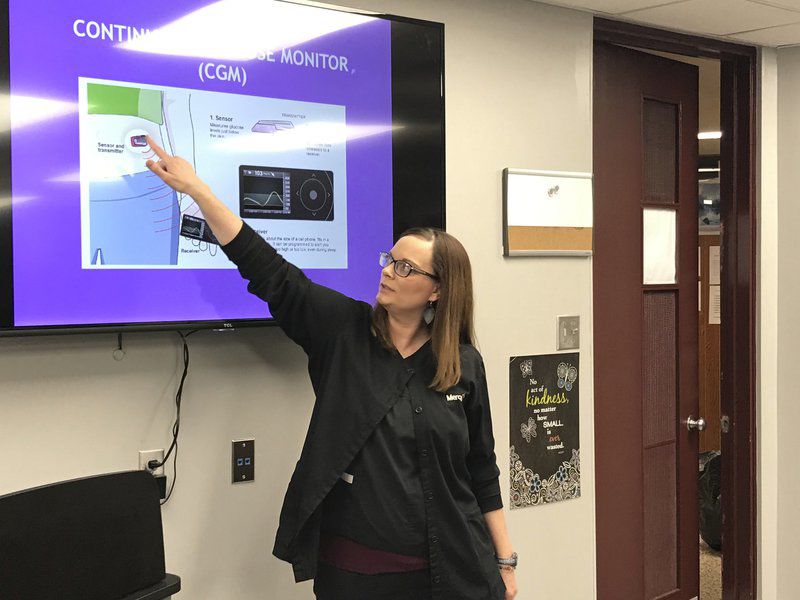 Eric Swanson | The Ada NewsMercy Hospital Ada histologist Mindy Bell demonstrates how to inject a glucagon solution to help someone experiencing a hypoglycemic episode Tuesday at Ada High School. The demonstration was part of a lesson on diabetes and how it can affect people.

Eric Swanson | The Ada NewsLeah Babcock, director of the medical laboratory program at Mercy Hospital Ada, explains the difference between normal and insulin-resistant cells Tuesday at Ada High School. Babcock and her colleague, Mindy Bell, presented a lesson on how diabetes can affect people.

The specimens, which showed how diabetic ulcers can damage a person’s toes and feet, offered a powerful reminder of how the disease can cause serious health problems if it is not properly controlled.

The specimens were one of the visual aids that Bell and Babcock included in a lesson about a hospital lab’s role in diagnosing and monitoring diabetes. Bell is a histology tech at Mercy, while Babcock directs the hospital’s medical laboratory science program.

Mercy is teaming up with Ada City Schools this semester for a series of lessons on health-related topics, including diabetes. Tuesday’s lesson was the latest installment in the series, which will continue through the end of the month.

The lesson was designed to educate students about diabetes and show them which jobs are available in the health care industry, said Paula Kedy, executive director of curriculum and instruction for Ada Public Schools.

“It’s an opportunity for you to understand a couple of things,” she said. “Number one, the content about what is diabetes and how does it affect you.

“But number two, what are some careers out there and possible for you in Ada, Oklahoma. at Mercy? As a nurse? As a doctor? As a physical therapist? All of kinds of things available to you.”

A crash course in diabetes

There are three types of diabetes, a disease which affects the way the body regulates blood sugar, also known as glucose. People with type 1 diabetes do not produce insulin, while people with type 2 diabetes don’t respond to insulin as well as they should and, later on, do not generate enough insulin to meet their body’s needs.

Pregnant women may develop gestational diabetes, which usually goes away after birth but creates a higher risk that the woman will become diabetic later in life.

At one point in the lesson, Babcock showed the students a colored PowerPoint slide of normal and insulin-resistant cells to illustrate how glucose affects someone’s blood sugar levels.

“Here we have normal cells and the red dots are glucose molecules, and then the insulin is blue dots,” Babcock said. “Here’s a cell. This cell is getting glucose, which is normal.

“But if there’s insulin-resistant cells, the glucose is not entering the cells. So that leaves a lot of free glucose floating around in the bloodstream. This is why the blood sugar, or blood glucose, levels are high, because glucose is not getting into the cells. And the cells have to have that for normal function.”

Babcock said poorly controlled diabetes can cause a host of complications, including damaged blood vessels, which can prevent wounds from healing properly. Other possible complications include blindness, kidney failure and increased risk of strokes or heart attacks.

Babcock said type 1 diabetes cannot be reversed or outgrown, but it can be controlled with insulin. She added that people with type 2 diabetes can manage their disease — or possibly even reverse it — with the help of oral medications or insulin, better eating habits and exercise.

Bell and Babcock ended the lesson with a short description of their jobs and their reasons for choosing careers in health care.

Babcock said she holds a degree in medical laboratory science and could have worked in a clinical lab, but she enjoys her current job.

“I like working in a hospital because there’s a lot of variety and a lot of excitement and a lot of people I get to meet, like my coworker,” she said. “The thing about being in a lab is you don’t necessarily have a lot of patient care, but the job I do does impact patient care.”

Bell is a 13-year veteran of Mercy’s pathology lab, which examines tissue specimens. The goal is to provide an accurate and comprehensive diagnosis of the patient’s disease so the treating physician can develop a treatment plan.

“They can tell you if you’ve had appendicitis or if you’ve had colon cancer or anything like that,” Bell said. “We can make that diagnosis in the lab.”