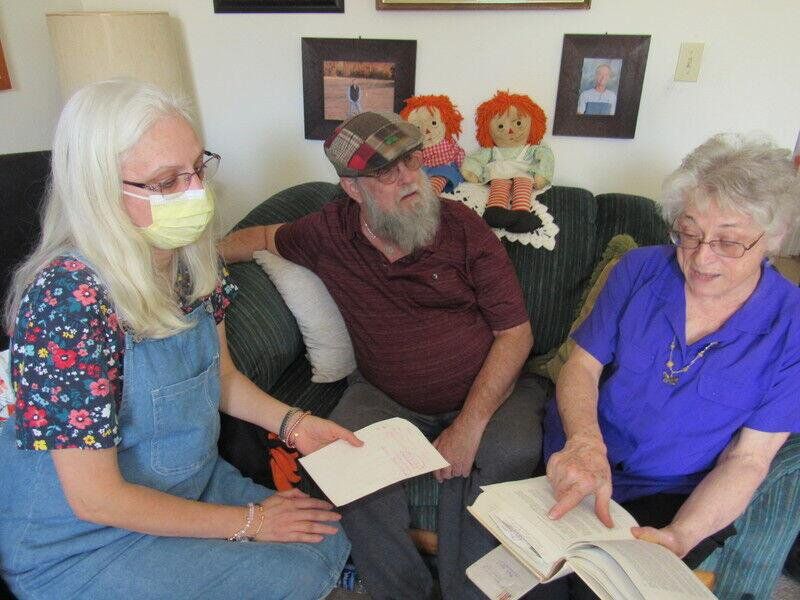 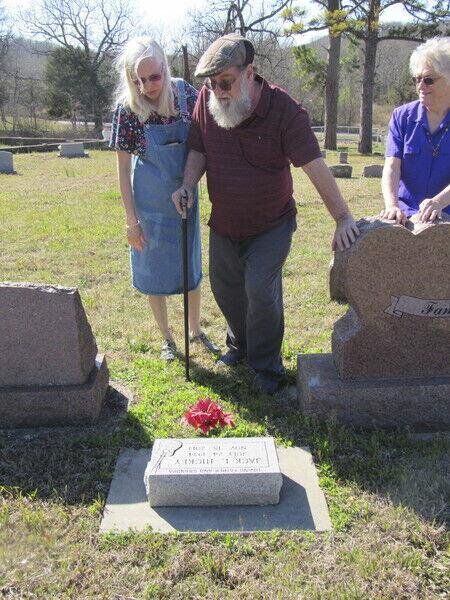 Michellene O’Ryan, left, and Jack O’Ryan look at his father’s grave at Brushy Mountain Cemetery while O’Ryan’s aunt, Helen Hickey looks on. O’Ryan, who has bladder cancer, hopes to have his ashes spread at the cemetery 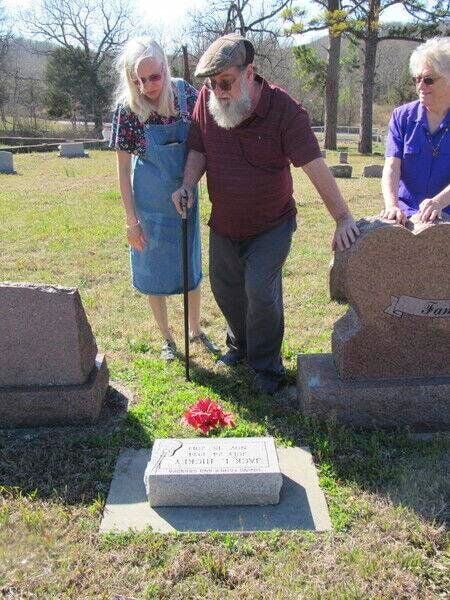 Jack O’Ryan shows his wife, Michellene O’Ryan, around Brushy Mountain Cemetery, located in the hills where he said “he got to be a boy.”

Michellene O’Ryan, left, and Jack O’Ryan look at his father’s grave at Brushy Mountain Cemetery while O’Ryan’s aunt, Helen Hickey looks on. O’Ryan, who has bladder cancer, hopes to have his ashes spread at the cemetery

Jack O’Ryan shows his wife, Michellene O’Ryan, around Brushy Mountain Cemetery, located in the hills where he said “he got to be a boy.”

California resident Jack O’Ryan says he wanted biscuits and gravy as soon as he got to his aunt and uncle’s house in Oklahoma last weekend.

“That’s what grandma fixed,” he said. “Cancer had destroyed my tastebuds. There are certain things that taste good with milk.”

Memories of holidays and summer days on Brushy Mountain helped him savor those biscuits even more.

O’Ryan, 63, says he has been diagnosed with bladder cancer and given less than a year to live. He brought his wife, Michellene O’Ryan, to the Muskogee area to meet relatives over the weekend and to see the place where he said he “was allowed to be a boy.”

The Dream Foundation, a charity serving terminally ill adults, paid the airfare and lodging, as well as a $250 stipend.

O’Ryan said he wanted his wife to see where he grew up and meet the family he grew up with.

“When they bring my ashes, I want her to be acquainted with my family,” he said. “I want my ashes to be taken here so that I’d like for her to know the family and history.”

He said he wants part of his ashes to be scattered on his grandmother and grandfather’s property near the cemetery.

“It was a very private gravesite, and Jack was very comfortable there,” she said.

Jack O’Ryan said he and his sister grew up with their divorced father in Irving, Texas. Their grandparents lived in the Brushy Mountain area between Muskogee and the Arkansas River.

“He allowed me and my sister to come up here in summers, Thanksgivings and Christmases, so I can be a boy,” O’Ryan said. “My grandma and grandpa had 100 acres, and I would just go out the front door or back door and become a boy.”

O’Ryan said his first memories of Brushy Mountain include a black horse one of his aunts owned.

“He was meaner than a you-know-what,” O’Ryan recalled. “He would come chasing after us. I was a little 6-year-old, 4-year old running away from a big black stallion.”

He recalled heading through the hills on a four-wheeler.

He recalled cranking homemade ice cream and “the boys would do all the hard work.”

One thing O’Ryan said he does not recall is “one harsh word from grandma and grandpa.”

“They allowed my sister and me to buy a parakeet,” he said. “Grandpa was an old farmer, and he loved old Sparky. They allowed us to do things we couldn’t do with our dad.”

O’Ryan’s aunt, Helen Hickey, said the family had a stream that went to the old farm.

“He would disappear up there on Brushy Mountain for hours,” she said.

Hickey, who lives in Sand Springs, shared the family’s deep history with Michellene.

Hickey said the old home place dates to the Civil War, when Confederate and Union soldiers went through there on their way to the Battle of Honey Springs.

Jack O’Ryan said he had a fallout with his stepmother as a teen, then went to live with his mother and other family members.

“Because of all that, I never really felt family. I never understood family,” he said, recalling being “bounced around.”

“Thats what made this even more important,” he said about Brushy Mountain. “It gave me something I had never had.”

O’Ryan moved to California as an adult and was a mechanic for 30 years near Santa Rosa. He has two children from a previous marriage.

He said he was diagnosed with cancer in 2020 and put on hospice. A hospice nurse told him about the Dream Foundation.

O’Ryan said the weekend visit marked the first time his current wife has met anyone on his father’s side of the family.

“They’re all so precious and down to earth,” Michellene O’Ryan said. “You just felt like home and you fit right in right away. They welcomed me with open arms and were willing to help out. Jack was their priority. They saw to it he was comfortable.”

Jack O’Ryan shares his thoughts, and allows others to share theirs, in the a Facebook group “Jack O’Ryan’s Going Home Journal.” He said the page has generated responses from around the world.

He also set up a butterfly garden.

“Before I went in for my diagnosis, I was sitting out in my car, and there was a butterfly that flew out of a bush,” O’Ryan said. “The first thing that came to my mind was metamorphosis. My heart was saying a change is coming. I’m holding on to that.”