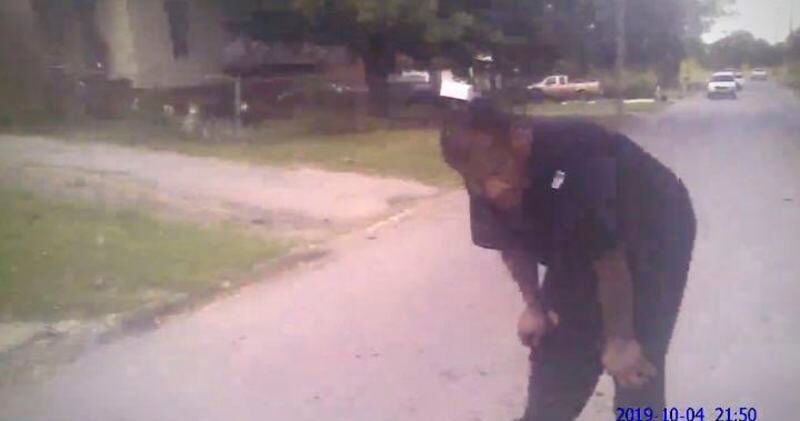 Anthony Meely is visible in this footage taken from an Ada Police Department body camera. Meely died Oct. 4, 2019, during an altercation with police. 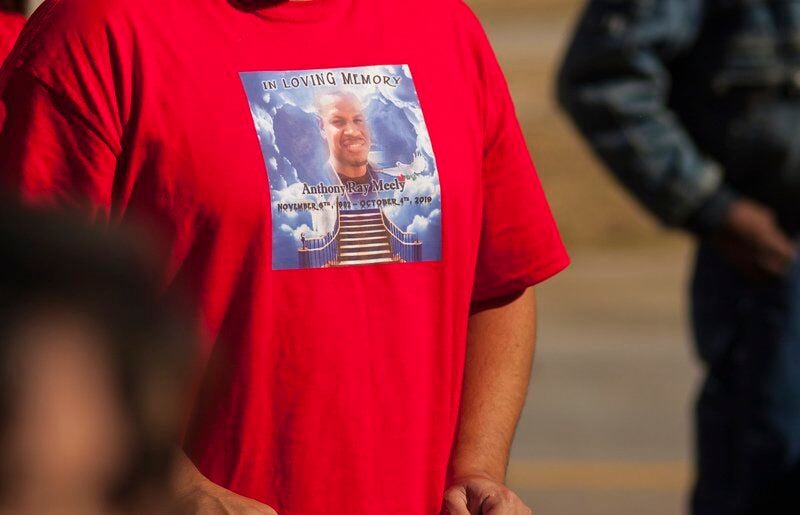 A supporter wears a commemorative T-shirt at a march and rally in remembrance of Anthony Meely, who died Oct. 4 during an encounter with police. 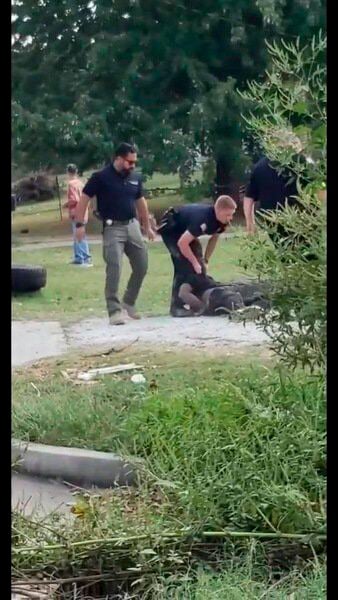 Ada police officers can be seen with Anthony Ray Meely in this screenshot from a bystander’s video provided to The Ada News. Meely died Oct. 4, 2019, after an altercation with police near a northwest Ada apartment complex

Anthony Meely is visible in this footage taken from an Ada Police Department body camera. Meely died Oct. 4, 2019, during an altercation with police.

A supporter wears a commemorative T-shirt at a march and rally in remembrance of Anthony Meely, who died Oct. 4 during an encounter with police.

Ada police officers can be seen with Anthony Ray Meely in this screenshot from a bystander’s video provided to The Ada News. Meely died Oct. 4, 2019, after an altercation with police near a northwest Ada apartment complex

Ada police officers involved in an October 2019 incident that ended with a man’s death after an altercation with police near a northwest Ada apartment complex have been cleared of any wrongdoing in the matter.

“This finding today will close the investigation of the law enforcement personnel mentioned herein and express a lack of probable cause to charge any of the individuals named with any criminal offense and should serve to exonerate all the Ada PD Officers involved from criminal action, prosecution or suspicion,” Smith wrote.

In the letter, Smith said the actions of the officers involved in the incident are “ruled by the Office of District Attorney as justifiable use of force under Oklahoma Law, and the attendant death to be one accompanied by accident and misfortune resulting from Cardiac Arrest following physical exertion, contributed to by methamphetamine abuse as found by the (Oklahoma State Office of the Chief Medical Examiner).”

Smith also noted a finding by Mercy EMS personnel of “the possible onset of Excited Delirium (EXD) that was likely precipitated by stimulant drug use while accompanied by past medical history of hypertension, ischemic heart disease, methamphetamine abuse and schizophrenia as noted by the OCME.”

OCME ruled in March that 36-year-old Anthony Ray Meely died of “cardiac arrest, following physical exertion and restraint in (a) setting of methamphetamine.” The ME investigation also found that hypertensive heart disease was another significant condition which contributed to Meely’s death. The ME reported finding no evidence of lethal physical trauma.

Meely collapsed Oct. 4, 2019, after a confrontation with police, during which, police say, Meely repeatedly ignored instructions to stop while attempting to evade an officer. Meely later died in an ambulance while being treated by Mercy EMS paramedics.

In body camera footage released by police and videos posted to various social media networks, Meely can be seen running from an officer, struggling to break free as the officer grabs Meely and tries to wrestle him to the ground. During the struggle, Meely can be seen resisting efforts to subdue him, including at least two punches by the officer before Meely breaks free and continues to try to evade capture.

Meely’s death sparked outrage among family, friends and some who claimed to have witnessed an Ada police officer use a taser gun on Meely during the confrontation, despite repeated insistence by police officials that the officer was not carrying a taser gun. In the weeks and months that followed Meely’s death, activists from the American Indian Movement and Black Lives Matter’s Oklahoma City chapter, along with local family, friends and community members, engaged in walks, marches and demonstrations in downtown Ada, culminating at the Ada Police Department, where those gathered discussed their pursuit of “justice for Anthony.”

Family members and community activists have criticized police handling of the incident, insisting that Meely suffered from mental health issues police should have been aware of from prior dealings with him. However, city officials said the officer who initially responded to the call was new, and had no prior dealings with Meely.

Allen said in March that his department regrets all loss of life during encounters with police, regardless of the cause.

“I personally feel like (the ME report) kind of affirms our initial judgement on this case,” Allen said at the time the report was released. “But, a death (still) resulted from the interaction and we’re upset about that, regardless of the cause. It’s tragic.”

In the months since the incident, a group of young local activists — Intersectional Activists — began a dialogue with Allen, who worked with them to help organize a Black Lives Matter march in Ada. The march held June 5 drew a crowd of more than 1,000 participants, including Ada police officers and Pontotoc County Sheriff’s deputies who marched peacefully with protestors down Main Street. Several of those marching held signs and wore T-shirts calling for “Justice for Anthony.”

After the march, at an assembly outside Ada City Hall adjacent to the Ada Police Department building, protestors spoke of Meely and their quest for justice while Ada police officers stood by, peacefully listening to their remarks.