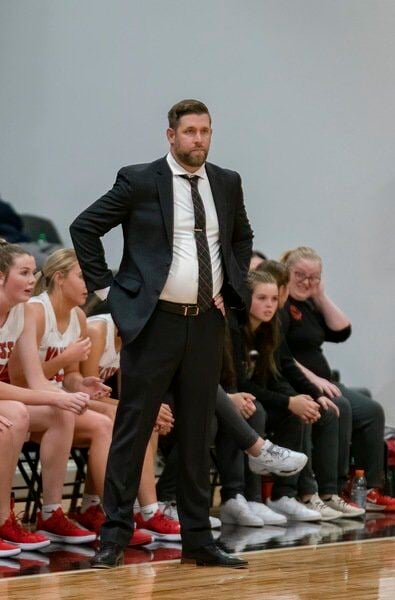 Wes Edens | For The Ada NewsVanoss girls head coach Jonathon Hurt and his Lady Wolves were voted the No. 1 seed for the 2020 Pontotoc Conference Tournament during a coaches meeting held Wednesday at Polo’s Mexican Restaurant. 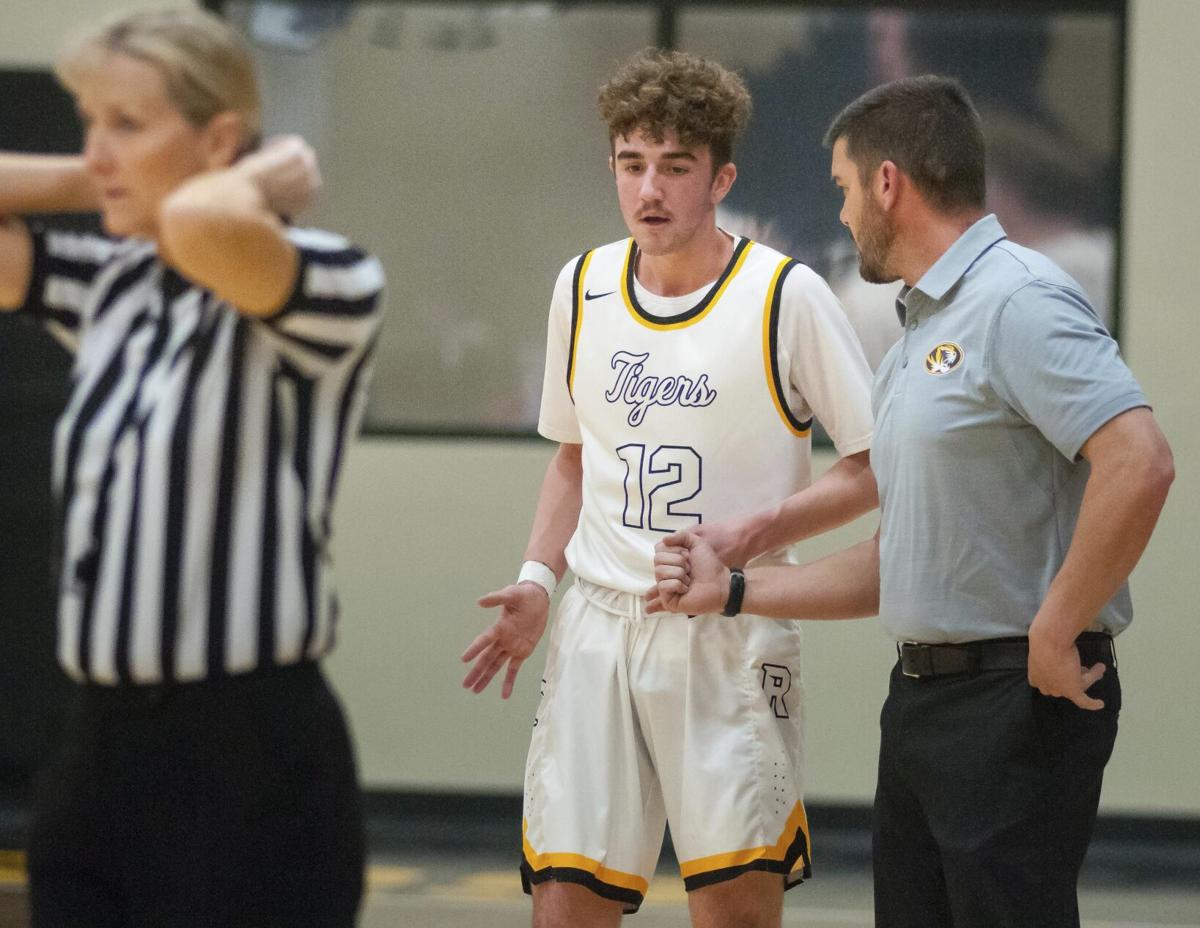 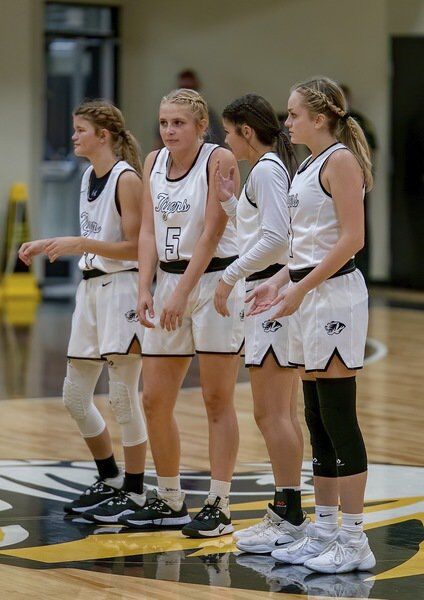 Wes Edens | For The Ada NewsThe host Roff Lady Tigers will be the No. 3 seed when the Pontotoc Conference Tournament tips off Dec. 7-12 at Roff High School. 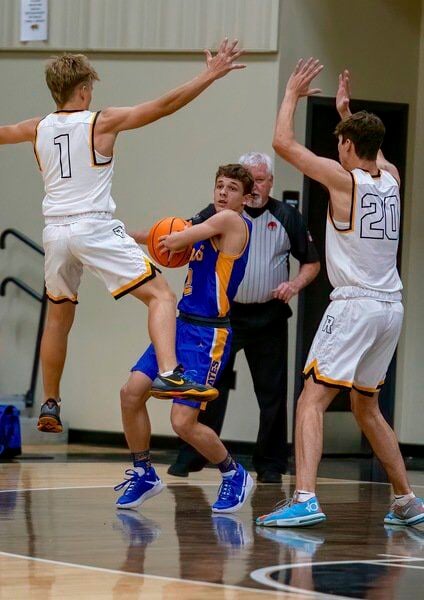 Wes Edens | For The Ada NewsRoff players Coby Simon (1) and Trayson Miller (20) double team a Moss player during action earlier this season. The Tigers were voted the top seed of the Pontotoc Conference Tournament, scheduled for Dec. 7-12 at Roff High School.

Wes Edens | For The Ada NewsVanoss girls head coach Jonathon Hurt and his Lady Wolves were voted the No. 1 seed for the 2020 Pontotoc Conference Tournament during a coaches meeting held Wednesday at Polo’s Mexican Restaurant.

Wes Edens | For The Ada NewsThe host Roff Lady Tigers will be the No. 3 seed when the Pontotoc Conference Tournament tips off Dec. 7-12 at Roff High School.

Wes Edens | For The Ada NewsRoff players Coby Simon (1) and Trayson Miller (20) double team a Moss player during action earlier this season. The Tigers were voted the top seed of the Pontotoc Conference Tournament, scheduled for Dec. 7-12 at Roff High School.

ROFF — Like with a lot of things in 2020, this year’s Pontotoc Conference Basketball Tournament will have a new look and feel due to the COVID-19 pandemic.

The 2020 tournament is scheduled for Dec. 7-12 and Roff is the host school. Roff coaches and administrators have come up with a plan of action to run the tournament as safely as possible that includes a number of COVID-19 protocols.

“Everything this year is so different. We’ve been planning for a couple of months, trying to figure out how many fans, masks or no masks — the best way to work everything,” Roff boys coach Larry Johnston told The Ada News after a coaches’ meeting to determine the seedings Wednesday night at Polo’s Mexican Restaurant in Ada.

“It’s going to be different, but we’ve come up with what we really believe is the best scenario to No. 1, keep everybody safe and get kids to play. That’s what we want,” he said.

The biggest change will be limiting the crowd inside the gym to 400, a little less than half the capacity of Roff’s new gymnasium. Each team will be granted 100 vouchers to disperse however their school sees fit and 200 all-access vouchers will be available each day at the gate on a first-come, first-served basis. Even patrons with OSSAA passes must have a voucher to get in the doors.

“If you have an 8 o’clock game, you might want to come early to get a voucher,” Johnston explained.

“Once those 200 are gone that’s going to be it for the day,” he said. “The ticketing situation has been our trickiest thing. It’s not ideal but hopefully, we have a good plan. It’s going to be so important for each community to pay attention to how their school is going to distribute their tickets. That’s the No. 1 thing.”

Games will start at 2 p.m. and will be spaced out two hours apart. Game 2 will begin at 4 p.m., Game 3 at 6 p.m. and Game 4 at 8 p.m. Between games, the gym will be cleared so it can be cleaned and sanitized. Johnston assures fans no game will tip off early.

Every tournament game will be broadcast live so fans that don’t attend or don’t get a voucher can watch from the comfort of their homes.

“Every single game will be live-streamed ... probably for the first time in history. That is one plus,” Johnston said.

In case a team can’t play at some point during the tournament due to COVID-19 cases or quarantines, junior varsity teams will on standby as replacements.

A list of rules regarding attendance to the games was given to school representatives at the meeting. Some of the highlights include:

Players choosing to attend games other than their own will be required to have a voucher and pay for that specific game unless accompanied by their coach.

Gates will open 15 minutes prior to game time and no games will start earlier than scheduled.

Ticket prices are $5 for adults and $3 for students.

Children 4 and under will not need a voucher for entry.

The Roff Tigers were voted as the top seed followed by Allen, Vanoss, Stratford, Asher, Tupelo, Stonewall and Calvin.

The Tigers got the nod by Pontotoc Conference coaches despite graduating starters Aiden Bagwell, Jairus Smith and Brady Benedict.

“We’re excited. We graduated five guys who played a lot, including three starters,” Johnston said. “It’s an honor and humbling. We were voted No. 1 last year, but Allen knocked us off. Our guys realize being voted No. 1 doesn’t mean anything. We’re going to have to go play well.”

Johnston said he expects to see competitive games throughout the boys bracket.

“Seeding our conference is tough. There’s going to be a lot of good games. That’s usually how it is. The boys’ side is tough,” he said.

The Vanoss Lady Wolves are the overwhelming favorites to win the girls championship as the top seed. Stratford is the No. 2 seed followed by Roff, Allen, Tupelo, Stonewall, Asher and Calvin.