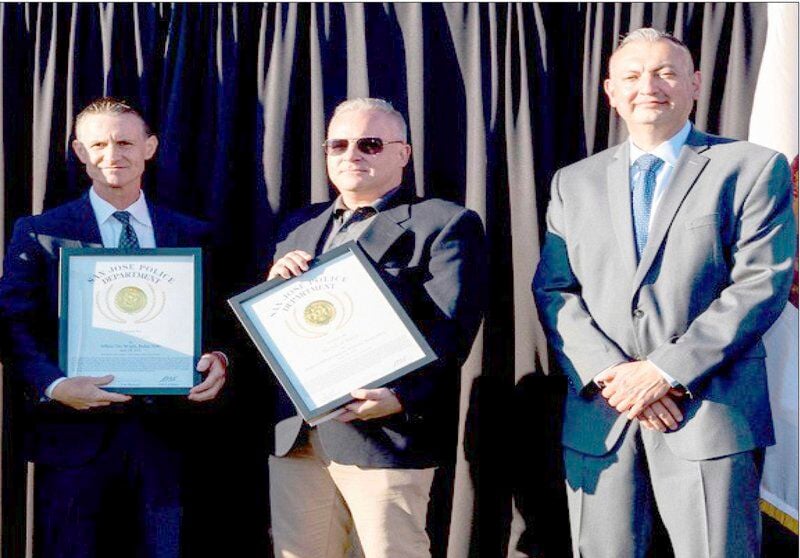 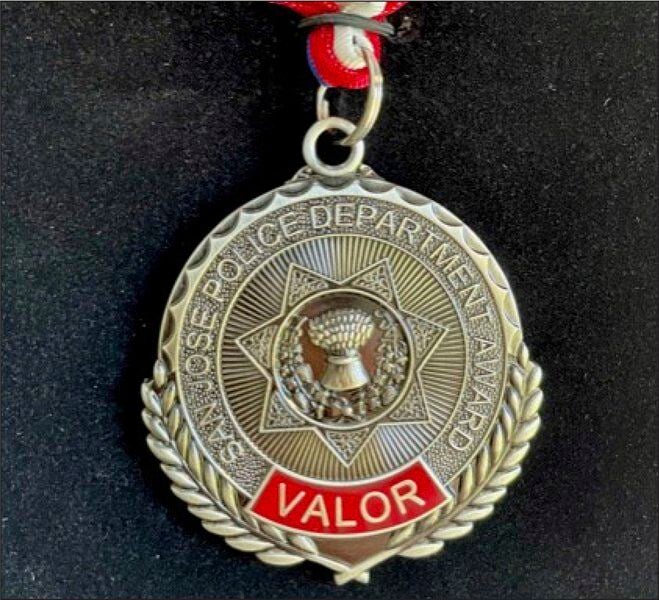 LOS ANGELES – A Chickasaw police officer wrapped up a 20-year law enforcement career by receiving a medal of valor for his life-saving efforts.

Responding to a 911 call from a Montessori School was the first call Officer Tim Wright received the day he returned to duty at San Jose Police Department after a one-year leave of absence. About 8 a.m. July 9, 2019, school staff reported a man in a van who was causing a disturbance in the parking lot.

“He was having a crisis, screaming and throwing things around the parking lot and of course the school officials got anxious and called us,” Officer Wright said.

Wright and his partner, reserve Officer Greg Warton, suspected the 56-year-old man was having a mental health crisis and attempted to coax him out of the van.

“We tried to talk to him and get him away from his vehicle, but he was inside his van, which made both of us nervous. Then some smoke started billowing from the van and then we saw flames.”

Another officer arrived on scene and the man began to slowly exit the van.

“We were pleading with this man ‘get away, get away’ but he dove back into the van.”

As the fire raged and flames engulfed the vehicle, all three officers tried to physically remove the man, but he resisted, clinging to the front tire and doorframe.

“We tried to pull him out of the van but he was holding on to the tire; he just didn’t want to go. So, Greg (Warton) in his wisdom, used a Taser as a distraction device and zapped him with it. He let go and we dragged him away,” he said.

As soon as the man, who weighed an estimated 230 pounds, was dragged to safety behind a patrol car, the van exploded. The roof and all of the widows were blown out, sending shards of glass and metal everywhere.

Police later learned the man, who was living in the van, had stockpiled propane and other combustible materials.

“It was quite an explosion,” Officer Wright said, “I’ve never seen an explosion like that, except on television.”

Officer Wright said the man was transported to the hospital and treated for burns on his arm and smoke inhalation, as well as a psychiatric evaluation.

For us, we really are true to our oath of protecting and serving,” he said.

Officer Wright retired from the San Jose Police Department in October 2019, finishing a rewarding career that included stints in the gang unit, internal affairs division, as well as patrolman. His degree in English was also utilized as he taught report writing to new officers.

“It is nice to be recognized, especially at the end of my career,” he said.

In the early 90s, when he was a student at San Jose State University, Wright attended a campus recruiting event searching for an exciting career. While there, he visited with some San Jose police officers, who were recruiting new officers.

“I was interested in art and had an art scholarship to a school in San Francisco, but I didn’t want to be sitting in an office all day and police work seemed exciting. It seemed interesting. This event (saving the man’s life) is so emblematic of that, you put a uniform on and something new and different happens every day,” he said.

“I am super interested in the Chickasaw heritage. I am currently reading ‘Protecting Our People: Chickasaw Law Enforcement in Indian Territory,’ by Michelle Cooke and I found out of my great-great-great-grandfather, named Duncan Ned, was a sheriff in Pontotoc County. I don’t come from a law enforcement family background, so it was neat to find out about my law enforcement connection,” he said.

Mr. Wright’s love of research, desire to connect to his heritage, and sheer determination is how he discovered his Chickasaw roots.

Adopted shortly after his 1968 California birth, Wright had always relied on information the adoption agency shared with his adopted parents that he had First American heritage.

“In the files (the birth mother) said the father is First American and actually misidentified him as Choctaw, originally,” he explained.

“I grew up with this story (of First American heritage),” he said, adding he always had a desire to verify the lore. “I grew up thinking ‘I’ve got to find out’ but it was very difficult.”

With the support of his adopted parents, he began to search for information about his birth parents and background.

“This was the 70s and 80s and it was hard to track down your heritage. There was no internet. I actually still have a type-written letter that my adopted mother wrote (to get records). It was almost impossible.”

After his adopted mother died when he was just 20 years-old, he developed a steely resolve and determination to find his First American roots.

“I think her death made something inside of me want to prove it or disprove it and made me say ‘I am going to solve this once and for all.’”

It was the late 80s and early 90s and the internet was beginning to become commonplace, especially in his hometown in the middle of Silicon Valley.

Via the World Wide Web, Wright petitioned the judge who presided over the adoption, who released the highly-redacted adoption files.

His investigative skills kicked in and he kept searching.

Several years and many paper trails later, he found his birth mother.

“I was able to track down my mother and talk to her on the phone. I said, ‘Sorry, I am not here to mess up your life. I am really interested in that you identified my father as First American.”’

He asked for his birth father’s name and his birth mother shared it.

“And then the real research began,” he said.

He eventually located his birth father, but he was deceased.

“He went to Vietnam and when he got back he had a lot of problems, substance abuse, Type 2 diabetes and high blood pressure. So I never got to meet him.”

Although he never had an opportunity to meet his birth father, he developed a relationship with two half-sisters and his biological Chickasaw grandmother, Golden Smith, born in 1919 in Durant, Oklahoma.

Wright explained his Chickasaw Grandmother, Golden, accepted him wholeheartedly into the family and became his mentor for Chickasaw heritage.

“I learned everything about the Chickasaw culture from my grandmother.”

Through Golden, he learned of his grandmother, Rena Jones, who was an original enrollee in the Dawes Rolls and Golden’s grandmother, Ellen Ned.

He and Golden stayed in touch until her death in 2006. This relationship also nurtured his new hobby, genealogy.

“I have become the family genealogist because maybe I had a fire and I really wanted to know my roots.”

He has been researching his family background with the help of Chickasaw Nation staff.

“They have been so helpful, and I can’t wait to get (to the Chickasaw Nation) someday and dig into the research.”

The more he learns, the more the pride in his tribe grows.

“I have a tremendous amount of pride. I am very happy to tell anyone who asks about it and I am very proud. We have a strong nation and strong history. I am trying to teach my son. I’m happy he is growing up with this attachment and identity. The reputation of the Chickasaw Nation is so good because of the leadership and history and makes me proud to be part of that.”

Chickasaw Nation Governor Bill Anoatubby is so respected in the First American community not only as a Governor but as a person, he said.

A map of the Chickasaw Nation displayed in Wright’s home office keeps him connected to his heritage, as does attending local citizen gatherings, reading new releases from the Chickasaw Press and staying in touch with the tribal social media pages and the Chickasaw Times.

“The day of the event, I was wearing my medicine pouch which I made with guidance from a Lakota friend,” he said.

Mr. Wright now lives in Los Angeles with his wife, who is a Netflix executive, and their 16-year-old son, Kyle.