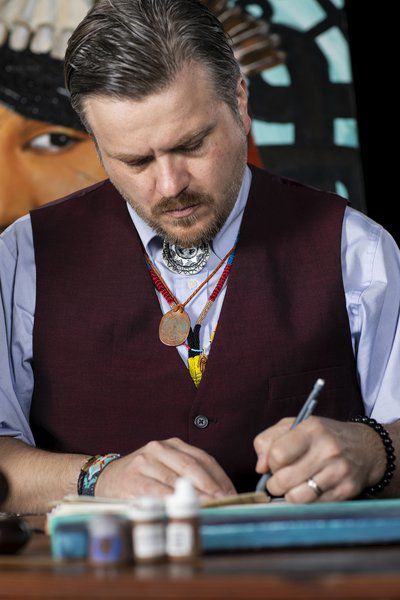 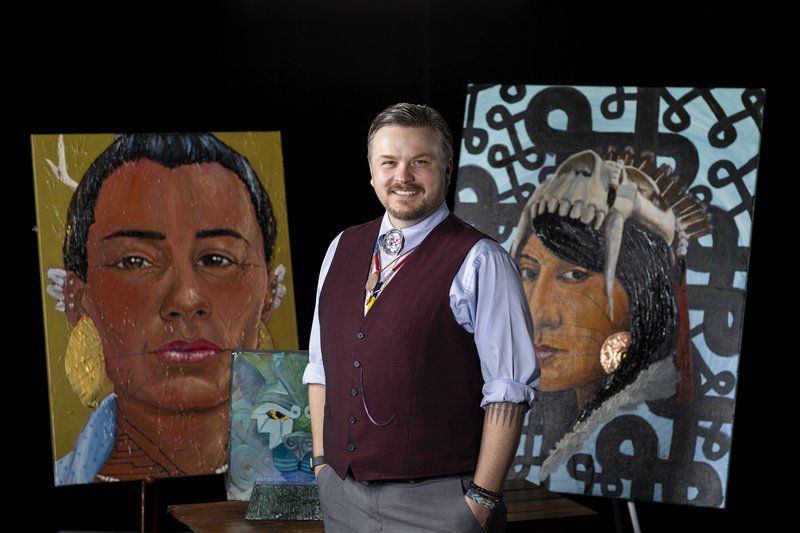 Chickasaw artist Dustin Mater is constantly reinventing his methods and approach to art. Mater will be showing and selling his new work at the Artesian Arts Festival May 23 in Sulphur.

Chickasaw artist Dustin Mater is constantly reinventing his methods and approach to art. Mater will be showing and selling his new work at the Artesian Arts Festival May 23 in Sulphur.

Chickasaw artist and self-proclaimed cultural imagineer Dustin “Illetewahke” Mater has some artistic left turns and fresh takes in the works, which he plans on sharing at the upcoming Artesian Arts Festival in Sulphur.

Mater, an award-winning multimedia artist and designer, invoked the late jazz legend Miles Davis to summarize his artistic endeavors as of late.

“I’m a moving train. I’m going forward and if you want to hear what I’m doing you better hop on, otherwise you can go to the record store and buy my old stuff,” Mater paraphrased, relating to the musician. “If you just talk about what you did and not what you’re doing, you’re dead in the water. That’s also true for visual artists.”

Mater’s words come to life in his work. He has infused a series of portraits with new techniques, and he is offering modern perspectives on scenes of his ancestors.

He said he has been emancipated by a firsthand encounter with Picasso’s work at the Oklahoma City Museum of Art.

“I’m looking at this Picasso. At a distance, it’s so sumptuous. You see the depth, all of its angles. It’s wonderful. But when you get closer, you see a thumbprint in the paint. He didn’t even bother to fill in all the canvas, and there’s some showing underneath,” Mater said.

Seeing a genius incorporate seemingly unfinished parts of a painting into a deeper composition changed Mater’s technique. Since then, he paints with a textured maroon canvas with a looseness he said “just works,” resulting in a richness and depth.

“You can see it in my portrait painting ‘Deer Woman at Brunch,’” Mater explained. “I’m getting looser, and by getting looser it’s pulling it all in. There’s a rawness to it.”

His recent acrylic on linen portraits are of Native American women – Chickasaw and other Southeastern tribal members – embodying history. In addition to “Deer Woman at Brunch,” Mater plans to take “The Question” and “I Am What You Are” with him to this year’s Artesian Arts Festival.

“The Question” depicts Regan De Loggins, a Mississippi Choctaw and Ki’Che Maya art historian and friend of Mater’s. “I Am What You Are” was inspired by Chickasaw weaver and designer Taloa Underwood.

He is also working on a series of watercolor ledger art pieces called “Birds Eye View.” The series is his contemporary take on the illustrations explorers produced upon making first contact with Native peoples – like what can be found in history books.

Those early onlookers often depicted Native Americans from the side and at a distance, as profiles, because this was their only vantage point. Thinking of the unique view today’s drones allow, Mater was inspired.

“What I’m doing is painting it so it looks like a bird is looking down,” he said, pointing to his painting of a man in a canoe looking up. “It’s a nontraditional way to show a very typical view of a Native man. I wasn’t interested in painting it like voyeurs with a side profile. There are thousands who have traversed that same field. I put in my own tweak, a new view.”

Pieces of this line are often confused for photographs, Mater said, or if the viewer did not catch on to the subject matter, it might appear to be abstract art. Only after close inspection do onlookers realize it’s painted on 1915 ledgers.

Though Mater prefers to not look back, his resume speaks for itself.

Some of his notable past creations include a Pendleton blanket called “Spring.” With its production, Mater joined Chickasaw artists Brent Greenwood, Joshua Hinson and Brenda Kingery in having had their designs used on Pendleton’s popular wool blankets.

His sculpture “The Unextinguished Fire” took top honors at the Southwest Association of Indian Arts Santa Fe Indian Market, one of the most prestigious Native American art shows in the nation. Mater said the sculpture represents the Chickasaws for never giving up and never giving in.

“That fire still burns,” he said.

He designed the patch for the Oklahoma-based 137th Special Operations Security Force Squadron, now an official Air Force heraldry patch. It features an ancient Chickasaw mace – an ornamental staff carried as a symbol of authority – a Southeastern tribal tomahawk and a woodpecker motif connecting the two.

Mater’s art has been displayed and sold at Orenda Art International in Paris and Indigenous Brilliance in Edinburgh, Scotland, as well as accepted nationally by several venues, including the National Museum of the American Indian in Washington, D.C.

Students have studied under Mater at Ada’s Chickasaw Nation Arts & Humanities Division building, as well as Sulphur’s ARTesian Gallery & Studios. His classes and workshops have covered making gorgets out of gourds, design and art marketing.

Looking forward, Mater said he wants to be as flexible as he can.

“Times are changing. One of the hallmarks of the Chickasaws is we’re pragmatic,” Mater said. “We could tell where the wind was blowing and seize upon those forces and any opportunity which arose.”

Areas he is exploring include volumetric screening, 3-D printing and holographic projections.

To see Mater’s artwork, learn about his podcast and see information concerning upcoming shows and festivals, visit his website at Dustign.com.

A celebration of all types of art, with an emphasis on Native American art and artists, the Artesian Arts Festival features diverse art media and a variety of visual art including paintings, basketry, jewelry, sculpture, metalworking, bead-work, textiles and pottery.

In 2019, the market saw more than 11,000 attendees and featured 125 elite Native American artists from 19 different tribes.

Located on the Artesian Plaza in downtown Sulphur, the Artesian Arts Festival is nestled among the Artesian Hotel, Casino & Spa, the ARTesian Gallery & Studios, the Chickasaw National Recreation Area and numerous boutiques and shops.