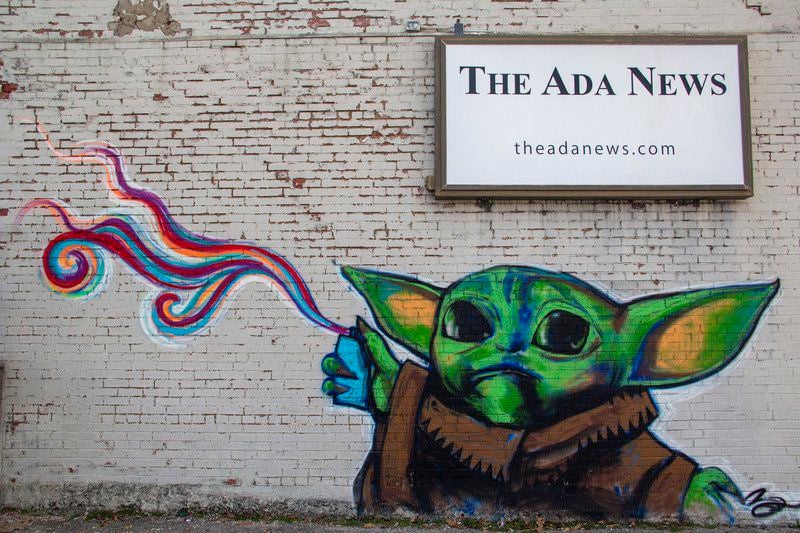 Chickasaw NationBrent Greenwood’s subject matter came from a show set in the Star Wars universe called “The Mandalorian.” It has become a popular place to stop for a selfie, with people even driving in from out of town to pay Baby Yoda a visit. 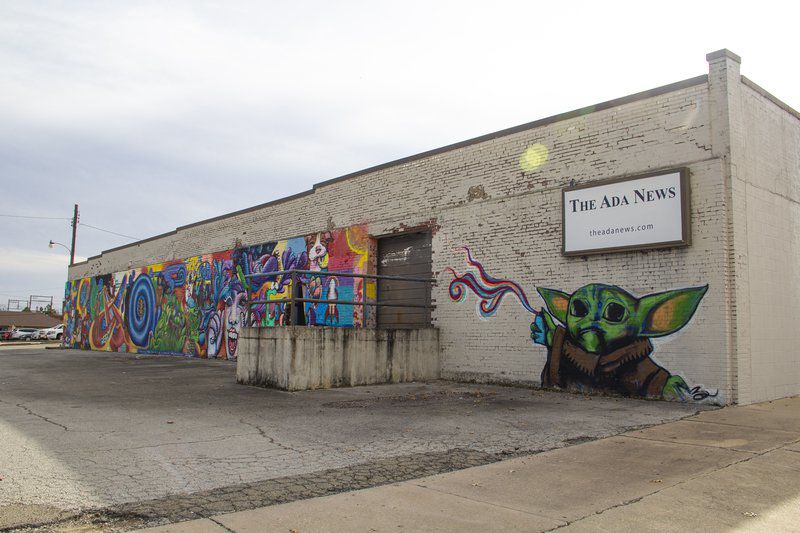 Chickasaw NationBrent Greenwood’s depiction of the new pop culture icon “The Child” or “Baby Yoda” was completed in the early morning hours of Dec. 21, 2019. He wanted the graffiti art to be the finishing touch to a full mural created by students of the Chickasaw Arts Academy. 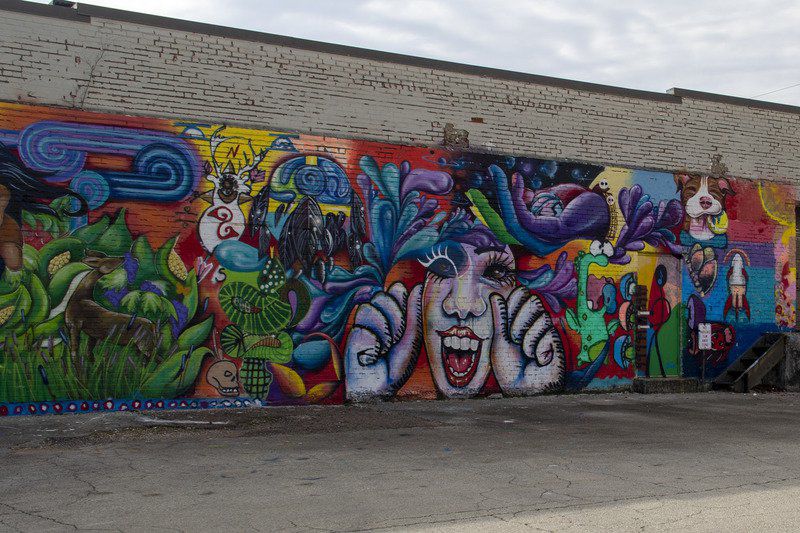 Chickasaw NationA mural on the side of the former The Ada News building was painted by 17 young Chickasaw artists over the span of two classes with the Chickasaw Nation Arts & Humanities Division. 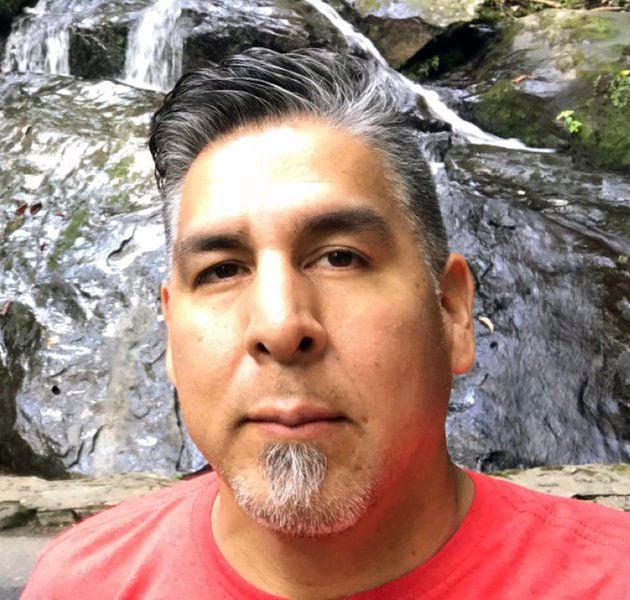 Chickasaw NationBrent Greenwood’s subject matter came from a show set in the Star Wars universe called “The Mandalorian.” It has become a popular place to stop for a selfie, with people even driving in from out of town to pay Baby Yoda a visit.

Chickasaw NationBrent Greenwood’s depiction of the new pop culture icon “The Child” or “Baby Yoda” was completed in the early morning hours of Dec. 21, 2019. He wanted the graffiti art to be the finishing touch to a full mural created by students of the Chickasaw Arts Academy.

Chickasaw NationA mural on the side of the former The Ada News building was painted by 17 young Chickasaw artists over the span of two classes with the Chickasaw Nation Arts & Humanities Division.

In the wee hours of Saturday, Dec. 21, 2019, Chickasaw artist Brent Greenwood sat in his front room, sketching and picking out cans of spray paint. He’d need a lot of green. At the crack of dawn, he started working.

On the corner of 10th and Broadway, music played from the trunk of Greenwood’s car. Below the sign reading “The Ada News,” he sprayed quickly with the help of his wife, Kennetha, who tossed the right caps and cans his way. “Please get me a yellow cap. Can you find me a black cap? Hand me that green.”

Locals driving through rubbernecked, some pulling into the newspaper’s parking lot to get a better look.

“Growing up, I always saw graffiti artwork on the side of buildings, on trains. I was doing graffiti through the mid- to late ‘80s, because that was part of the hip-hop culture and urban culture in the south side of Oklahoma City,” he explained.

But as he developed as an artist, it became more – much like the piece he completed before 9:30 a.m. that Saturday.

What materialized was this: big, black, glistening eyes looking up as a tiny, three-fingered hand sprays its own can of paint. A mist of blues, reds and oranges flowing out in ribbons toward a larger mural on the wall. A tiny, green creature dressed in a noticeably Native-looking robe with half diamonds along the collar. Oversized ears perking up toward the sky.

Greenwood’s depiction of the new pop culture icon “The Child” (known colloquially as Baby Yoda) – a mysterious character from a show set in the Star Wars universe called “The Mandalorian” – represents only a few hours of work. Even so, it has created lasting and far-reaching ripples.

This is the way

“This is the way,” the Mandalorian people repeat as a mantra in the show, reminding themselves of their shared lifeways and creed.

“This is the way,” Greenwood, through his depiction of “The Child,” also seems to say.

As graffiti art, the gremlin-like figure does metaphorically what Greenwood literally aims to do. It draws attention to the work of 17 young Chickasaw artists who covered the side of the former The Ada News building with their expressions.

The teens did so over the span of two classes with the Chickasaw Nation Arts & Humanities Division, with the guidance of professional Native artists Natasha Wagner and Yatika Fields.

Greenwood is the director of fine arts for the Chickasaw Nation, which includes fulfilling the role of mentor to the young artists.

“If you look at the side of the building, you’re going to see a full-scale mural depicting different aspects of the Chickasaw culture. It’s the creation of our young Chickasaw artists, their ideas coming to life in full color through mural and spray paint techniques,” Greenwood said.

“It’s whimsical; it’s fun. I feel there is something on the wall for everybody. And that’s the way the students created it. They wanted it to be fun, lively and tell their story with their aesthetic and color palettes,” he said. “The artwork comments on unity to all nations of people, the balance of universal spirits, men’s and women’s role in Chickasaw culture and clan animals. And it has whimsical creations the students came up with, like a stick figure playing a xylophone.”

Greenwood’s Baby Yoda was the final touch to their overall mural, his attempt to tie it all together. Through compositional aspects like leading lines and curves, it points onlookers toward the students’ work. And on a larger scale, the attention Greenwood’s work has garnered online, in the news and through word of mouth has redirected many eyes toward their creations as well.

Greenwood said he didn’t want to draw a lot of attention to himself. It didn’t quite work out as he planned.

“I didn’t think it’d have this much draw,” he said. “But I had a cousin in Dallas call me last night to say she saw me on the news. I’ve had the links sent to me. You can see all of the comments, too. People want to take road trips to Ada to get a picture with Baby Yoda.”

Rumblings of what was to come were apparent on Greenwood’s social media channels. On Dec. 14, he posted a simple painting of The Child’s face. “The eyes!! Brent!! The eyes!!” Chickasaw artist Margaret Roach Wheeler responded. Another commenter said she missed the graffiti Greenwood was known to doodle.

On Dec. 21, the day it all happened, The Ada News published a tongue-in-cheek breaking news item which read, “We’ve uncovered evidence the Mandalorian may have passed through Ada as he fled the events on Nevarro.”

The same day, his wife posted photographs she snapped in between handing Greenwood cans of paint. Greenwood’s process can be seen in what she captured. A hooded figure bends over to create blue outlines, starting with the ears.

“It had this kind of ripple effect on social media with shares and likes and comments. I’ve had people send me pictures with Baby Yoda. I’ve made new friends with fellow artists,” Greenwood said. “My kids think, ‘Oh yeah, dad, you knew this was going to happen.’ I say, ‘No, I didn’t, not like this.’ I did it for free, just wanted to do it, give back and enhance the community with public art. I just like doing it, as an artist making that mark.”

To date, a smattering of print, online, radio and television news outlets in Oklahoma, Texas, Kansas and Indiana have broadcast stories about Greenwood, his rendition of Baby Yoda and his support of young Chickasaw artists. Coverage has extended out even to places like Utah and Florida. For examples, check out The Ada News, Oklahoma Gazette, KFOR, KXII, KTXS and iHeart.com.

Passing through downtown Ada, it is not uncommon to see a family parked on the side of the former The Ada News building, grabbing a selfie with Baby Yoda. Groups like the Green County Mustangs Club in Tulsa planned road trips to visit the new landmark.

The piece, like the pop culture figure, struck a reverberating chord. This appreciation is amplified within the Native American population, according to Simon Moya-Smith, who writes for NBC News.

“Baby Yoda is each of us, when we were kids growing up at pow wows, protests, rallies and marches, or he is today’s Native baby, learning the ways of the force, fumbling and eager, yet ‘not ready.’ And, one day, babies are no longer babies, but learned adults, prepared to fight, to lead, to teach and to pass on the wisdom to the next generation,” Moya-Smith wrote in an article at NBCnews.to/37mmaE3.

A native Oklahoman and contemporary artist of both Chickasaw and Ponca heritage, Greenwood was born in Midwest City. He is a graduate in fine arts disciplines from the Institute of American Indian Arts and Oklahoma City University.

“I’ve been able to employ what I’ve learned over the years. We have a lot of budding young artists that just need some direction, and I know exactly where they are coming from because I was there too. So it’s cool. I am able to give advice, mentor these young artists and be there for them,” he said.

He also maintains work as an independent artist on commission. Even early in his career as a rural letter carrier with the United States Postal Service serving as a means to pay bills, he worked as an artist.

“I consider myself an artist first. That’s my passion. That’s what I love to do. That’s always going to be there,” he said.

He is known for more than his so-called graffiti art. His figurative work in vibrant acrylic paints are a staple among his creations, but he also is known for his ledger, printmaking and mixed media art. His originals and prints adorn numerous tribal facilities and even have been applied to a Pendleton blanket sold exclusively at the Chickasaw Cultural Center in Sulphur.

As for his mural work and student mentorship, Greenwood said there are new plans and tempting walls in Ada and Sulphur. He hopes to spark creativity in those who view public art.

“Public art engages the community. It encourages and fosters the arts. It enhances the community, it spawns other projects, it leads to beautification. It’s visual expression for the community in a public setting,” Greenwood said. “It’s free. It’s not in a museum. You don’t have to pay to see it. It’s there if you want to see it. That’s what makes public art so great.”

Editor’s Note: In our newsroom, Greenwood’s rendition of The Child sparked messages from as far away as Michigan, in which viewers reported seeing the artwork on their nightly news broadcasts. Here at The Ada News, we’re big fans of the little green one, and we may or may not have a soft spot for Brent, too.