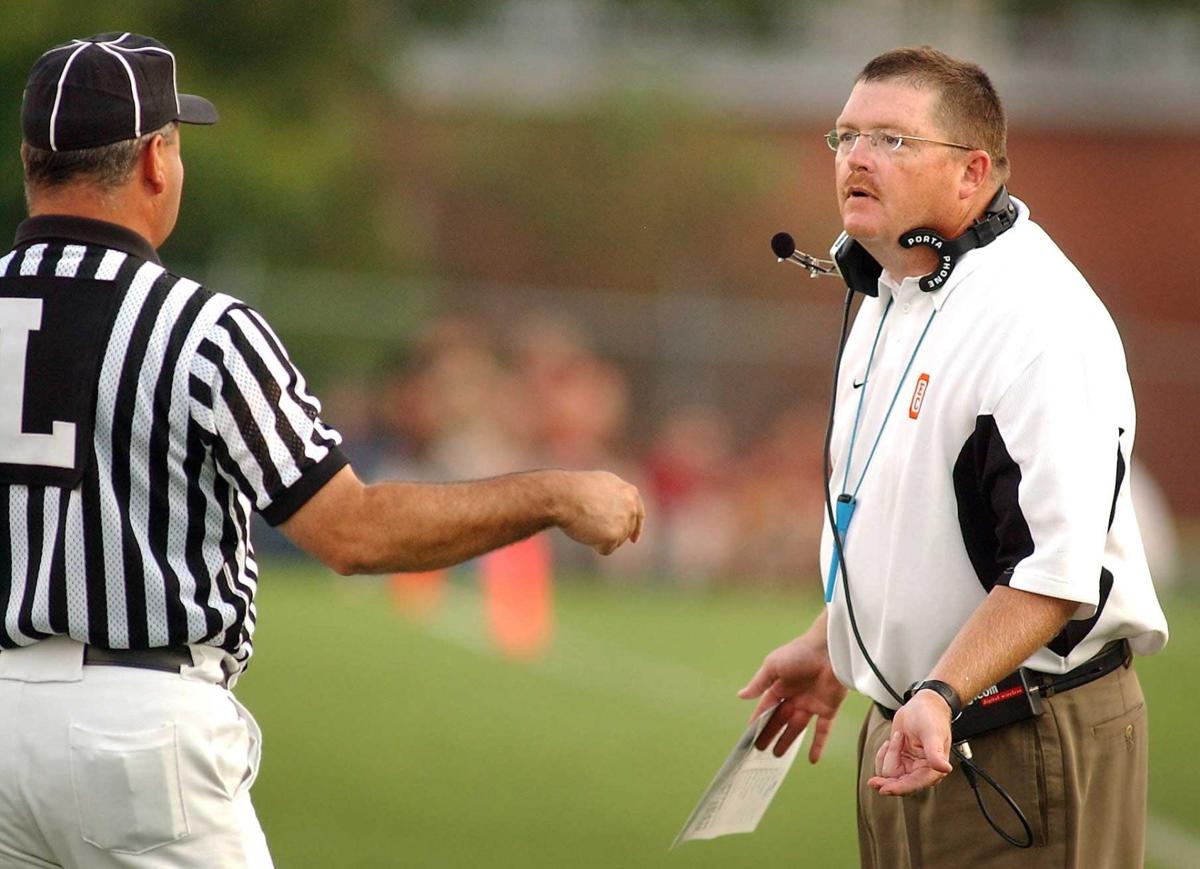 East Central head coach Tim McCarty debates with a game official in this 2005 Ada Evening News file photo. McCarty, who left ECU to become an assistant coach at Kansas State University, will return to Ada to become the newest Tiger head coach. McCarty will replace Kurt Nichols, who was fired with two games left in the 2008 season. 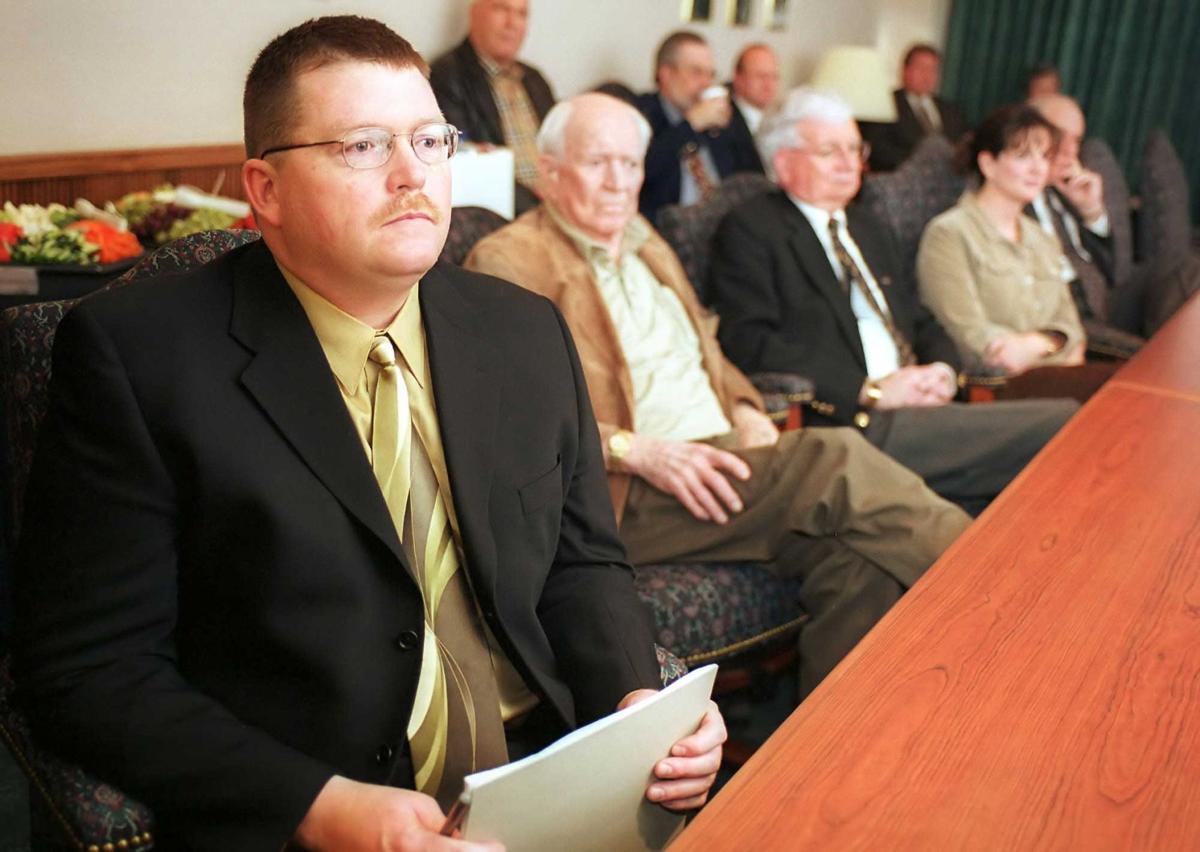 East Central head coach Tim McCarty debates with a game official in this 2005 Ada Evening News file photo. McCarty, who left ECU to become an assistant coach at Kansas State University, will return to Ada to become the newest Tiger head coach. McCarty will replace Kurt Nichols, who was fired with two games left in the 2008 season.

Tim McCarty, who left in 2005 after two seasons as East Central University’s head football coach to become assistant head coach and offensive line coach at Kansas State, has been re-hired to succeed Kurt Nichols as coach of the Tigers. In the end, timing was everything for McCarty. The No. 1 assistant to Ron Prince — fired last month as KSU’s head coach — for the past three years, McCarty applied for the ECU job within days of Nichols being notified that he would not return for a fourth season. “I’m very excited about it,” said McCarty, whose ECU teams were a combined 9-11 in 2004-2005. “The bottom line is Division II football is my favorite. I wanted to be a head coach, and I wanted to do it in Oklahoma. The timing was just perfect, so we went after it. The day the job opened, I inquired about it.” McCarty’s hiring was recommended earlier this week by an ECU search committee and was approved Tuesday by outgoing school president Dr. Richard Rafes and athletic director Brian DeAngelis — neither of whom was at the school when McCarty resigned suddenly to join Prince’s staff at Kansas State in December of 2005. “Everything I know and have heard about Coach McCarty enforces my belief that he is the right person for the position,” said Rafes, who will leave ECU on Feb. 1 to become president of West Virginia School of Osteopathic Medicine. “He has outstanding experience at both the Division II level and at the Division I level in the Big 12 Conference. He knows ECU, he’s known to be an outstanding recruiter, and we’re just very fortunate that he is willing to come here. “He will make our program a lot better,” Rafes said. “I wish I could be there to watch him next season, because I have all the confidence in the world that he will be a winner.” DeAngelis, who took over for longtime ECU athletic director Dr. Tim Green (the man who hired both McCarty and Nichols) in the spring of 2007, echoed Rafes’ sentiments. “He had the total package: coaching background and success when he was here before, high character, integrity,” DeAngelis said of McCarty. “He had leadership skills, and he’s well-organized. He has a great plan that he wants to implement, and his whole plan for running a program was just exceptional.” McCarty was responsible for ECU’s only winning season since 2001 when he directed the Tigers to a surprising 6-4 record in 2004. His final ECU team was 3-7 after suffering several tough late-season losses, and he said he believes he is returning to Ada a better coach than when he left. “When I left there, I was really torn, because I loved Ada,” McCarty said. “My dreams to be a Division I coach have been realized with my experiences at Kansas State. I was able to see a lot of cool things happen and I was able to accomplish some fantastic things. I was able to work with coaches who are real professionals and I was also able to get caught up on technology. “There’s no doubt in my mind that I’m better,” he said. “If you go anywhere and you don’t grow as a coach, you’ve missed an opportunity. I’m very thankful for the experience. There are 62 BCS schools (from conferences that are part of the Bowl Championship Series), and to be a coach at one of those schools, you have to be grateful for that experience.” McCarty said his first priority will be to assess his returning talent from this fall’s 3-8 squad and dive into the recruiting season, which is already underway. “I’m going to assume I’ll be behind (in recruiting),” he admitted. “We’re going to hit it running fast-break. I haven’t stopped recruiting Oklahoma, so it’s not like I don’t know where the guys are and don’t have some outstanding relationships around the state. “I haven’t talked to any coaches (at ECU) since I accepted the position,” McCarty said. “I have roughly an idea of our needs, and I want to double-check all those needs and our scholarship and roster situation. That’s the information I’ll be trying to get first. There will be some kids in the state I know are available, and I’ll be involved with talking to them right away.” Although ECU has had just four winning seasons in 15 since capturing the NAIA national title in 1993, McCarty said he believes the school’s football program can be a winner on a consistent basis. He said his first tour as the Tigers’ head coach should pay dividends this time around. “I’m more confirmed now with what I want to accomplish and how to accomplish it,” he said. “I know what needs to be done at East Central, now I just want to go do it. “I’m going to be on the hunt for some special guys, because it’s going to take a special guy to come to ECU and say ‘let’s do this’. Those are the kind of guys I’m looking for, and those are the guys who will help us win. “I love making a difference,” he added. “I’m chomping at the bit to get started. I’m very thankful and very excited to move back into the Ada community and live out a dream.”