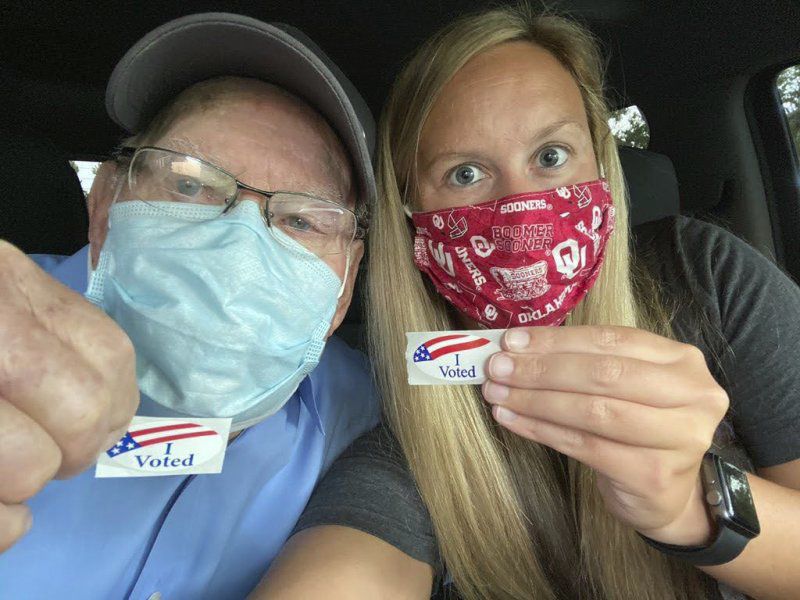 Jayci Harris, 32, poses with her grandfather, Bob Tweedy, 90, after voting in the primary election on Tuesday, June 30, 2020, in Ada. Tweedy is an Army veteran who served in the Korean War. Harris tweeted, “This guy served so you can vote,” with the photo and the hashtag Yes on 802, referring to the state question about Medicaid expansion. 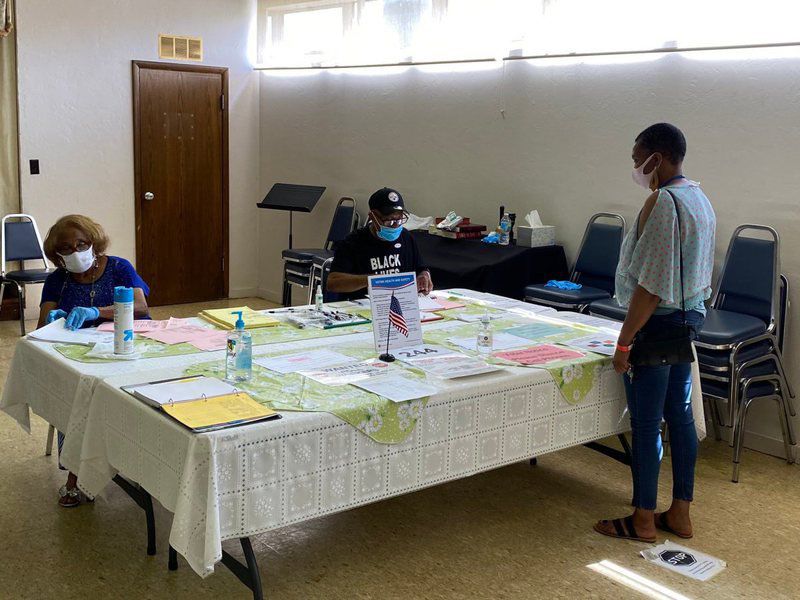 Poll workers check in a voter at Redeemer Lutheran Church in Northeast Oklahoma City on Tuesday. June 30, 2020. An extra table provides social distancing between workers and voters — a measure taken to protect both from COVID-19 exposure.

Jayci Harris, 32, poses with her grandfather, Bob Tweedy, 90, after voting in the primary election on Tuesday, June 30, 2020, in Ada. Tweedy is an Army veteran who served in the Korean War. Harris tweeted, “This guy served so you can vote,” with the photo and the hashtag Yes on 802, referring to the state question about Medicaid expansion.

Poll workers check in a voter at Redeemer Lutheran Church in Northeast Oklahoma City on Tuesday. June 30, 2020. An extra table provides social distancing between workers and voters — a measure taken to protect both from COVID-19 exposure.

Nearly 675,000 Oklahomans cast their ballot Tuesday in an election that will not only have deep ramifications for November’s general election, but also the state’s future.

In a historic vote, voters in one of the nation’s most conservative states passed a ballot initiative to embrace a key component of former President Barack Obama’s health care plan. Republican and Democrats, meanwhile, selected, or narrowed down, their nominees for several pivotal congressional and legislative races that will be decided later this year.

The election will also go down in the books as Oklahoma’s first vote since the COVID-19 pandemic shifted how many felt about in-person voting and the state’s ability to provide a safe electoral process.

As the dust settles on the primary, here are four takeaways from the wide-ranging slate of races that were decided Tuesday.

State Question 802, which would expand Medicaid eligibility to those making up to 138% of the federal poverty level, appeared on its way to easy victory when results started to trickle in shortly after polls closed at 7 p.m.

The results from absentee and early voting, which saw record turnout as many voters took extra precautions to vote from home in light of the pandemic, projected a huge win. Of the 72,536 who voted early or absentee, just over 75% supported the state question.

But as precincts around the state, particularly in traditionally conservative rural counties, reported their totals, that lead quickly began to disappear. Soon, it became clear that the vote would come down to the wire as the lead hovered around 5,000 to 7,000 votes for most of the night.

The support for the state question ultimately won out when 100% of precincts finally reported their vote totals nearly four hours after the polls closed.

The vote wasn’t uniform across the state.

A majority of voters in just seven counties — Oklahoma, Tulsa, Cleveland, Payne, Comanche, Cherokee and Pontotoc — voted for the state question. But the support in the state’s major population centers, namely Oklahoma and Tulsa counties where support was 60% or higher, was enough to push the vote past the finish line.

The state question, which added an amendment to the state’s constitution, is expected to extend health coverage to more than 200,000 Oklahomans. The state question requires the expansion to take effect by July 1, 2021.

There were few big surprises when it came to the Republican and Democratic primaries for the state’s five U.S. House seats and one U.S. Senate seat that is up this term.

The result of the closely watched contest for the Republican nomination in U.S. House District 5, meanwhile, was left undecided after Tuesday’s vote.

Businesswoman Terry Neese secured 35.5% of the vote and state Sen. Stephanie Bice came in second with 25.4% in the crowded nine-person field. Since no one received more than 50% of the vote, Neese and Bice will face off again in the Aug. 25 runoff election.

The winner of that contest will face Horn, who surprised many in 2018 by winning the historically Republican-dominated district, in November’s general election.

Not all of Oklahoma’s state legislative incumbents were as lucky as their congressional counterparts.

Even if all three of those legislators lose their runoffs, the damage to incumbents won’t be as bad as in 2018. During the last election cycle, 12 incumbents, all Republicans, were ousted by members of their own party in primary or runoff elections.

Eight lawmakers in this group voted against the $425 million tax bill, known as HB 1010xx, that paid for the teacher pay package. Voter anger of that move led many pro-education groups to actively try to defeat them.

Oklahomans originally were set to vote on local and school board races back in early April.

The coronavirus outbreak, however, put a hold on those plans as state election officials moved those contests to the June 30 primary.

But increasing cases, including a record-setting 585 that were reported Tuesday, along with long lines and problems in other states, led to worries that the risk of voting was still too high.

In an effort to make voting by mail easier, a group of citizens successfully challenged a state law that requires absentee ballots to be notarized before they are sent back. Lawmakers, however, quickly responded by passing a new law that allowed voters to send a photocopy of their ID instead of having it notarized.

Voters responded by requesting a record number of absentee ballots in the days and weeks leading up to the election.

Election Board statistics show about 88,400 sent mail absentee ballots. More than half of that total, or 48,081, came from registered Democrats.

Comparing the overall turnout of 674,040 to past elections can be difficult since 2018’s primary, for example, featured different races, including high-profile races for governor and other statewide offices. More than 892,750 voted in that election, which also included the state question that legalized medical marijuana.

Oklahoma Watch reporters, meanwhile, visited several polling places Tuesday. In most cases, there were few long lines and most of the poll workers and voters were wearing masks and practicing social distancing.

Broken Arrow resident Bonnie Sandler Rives was among those who said she saw most people wearing masks — something that Stitt and state officials have advised Oklahomans to wear — when she voted early Tuesday.