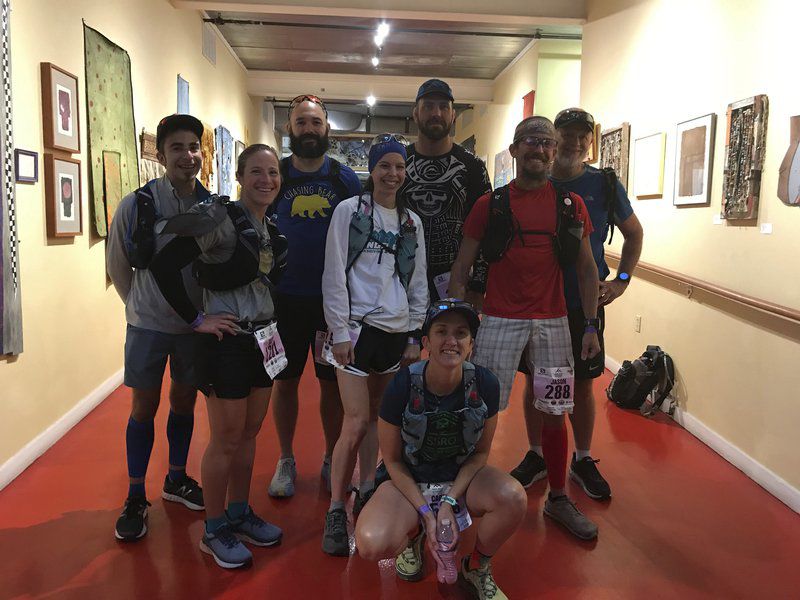 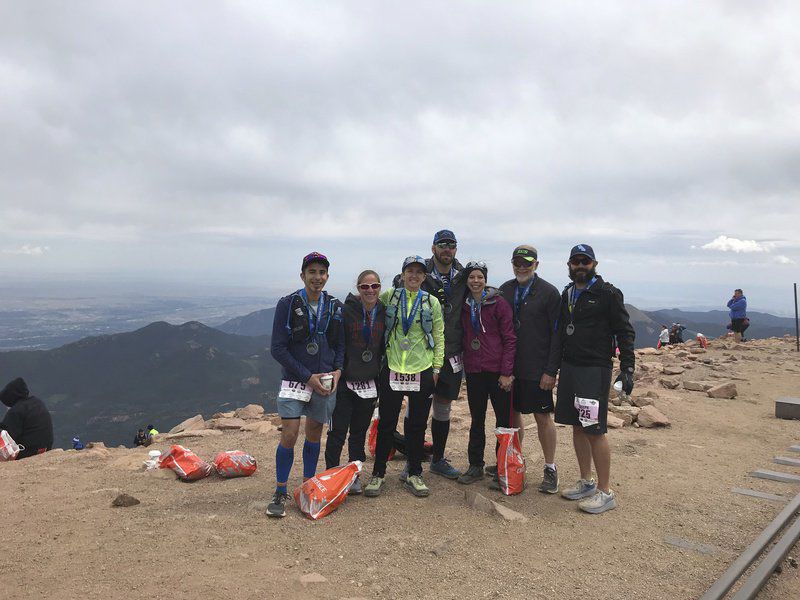 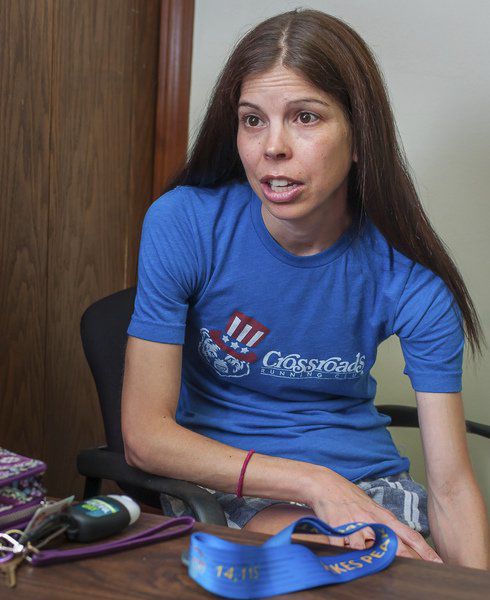 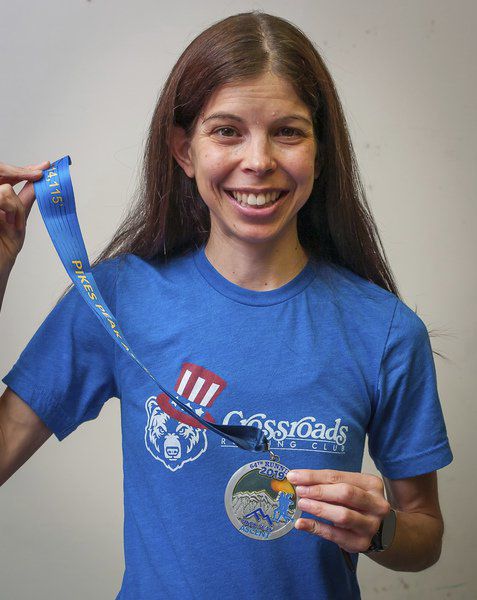 Adrienne Rustin, pictured Sept. 11 at The Ada News, displays her medal from the Pikes Peak Ascent and Marathon. Rustin, who turned 40 in August, celebrated her birthday by competing in the race. 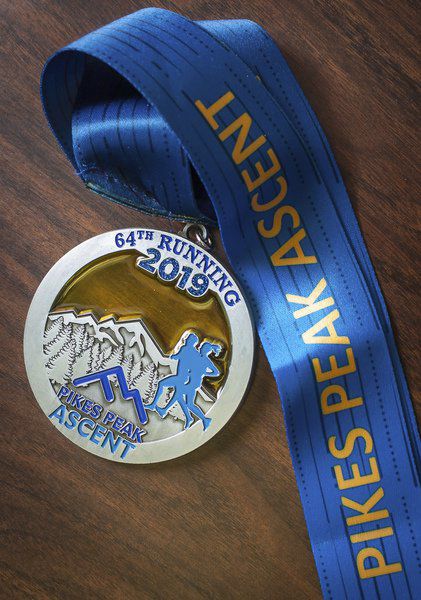 Adrienne Rustin’s medal from the Pikes Peak Ascent is shown. 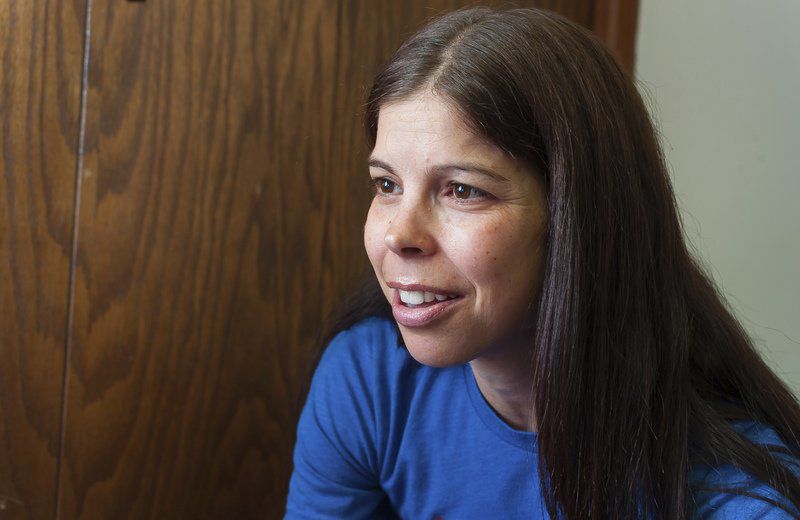 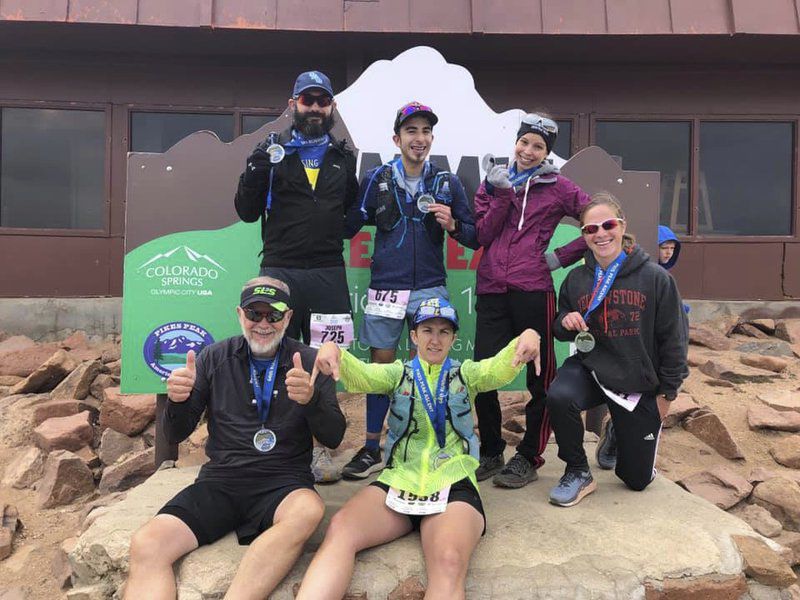 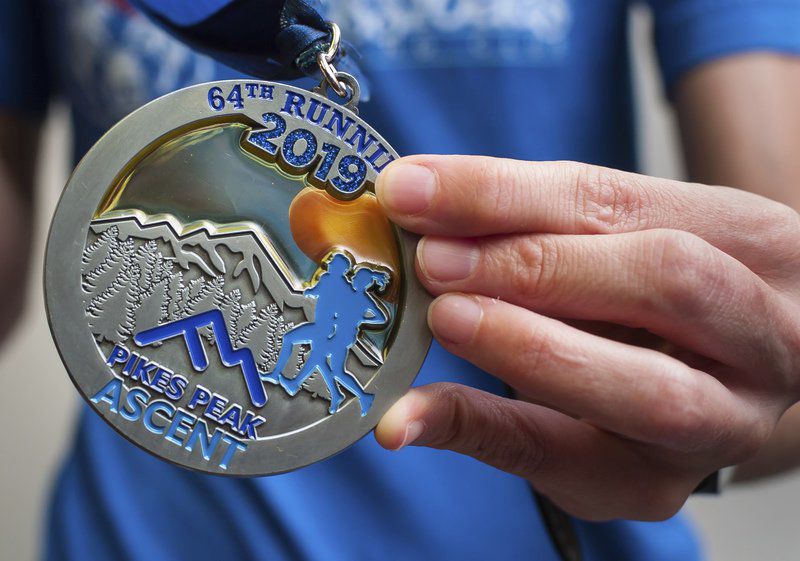 Adrienne Rustin, pictured Sept. 11 at The Ada News, displays her medal from the Pikes Peak Ascent. Rustin celebrated her 40th birthday by running the half-marathon.

Adrienne Rustin, pictured Sept. 11 at The Ada News, displays her medal from the Pikes Peak Ascent and Marathon. Rustin, who turned 40 in August, celebrated her birthday by competing in the race.

Adrienne Rustin’s medal from the Pikes Peak Ascent is shown.

Adrienne Rustin, pictured Sept. 11 at The Ada News, displays her medal from the Pikes Peak Ascent. Rustin celebrated her 40th birthday by running the half-marathon.

Adrienne Rustin wanted to do something fun and adventurous for her birthday this year.

As her 40th birthday approached, the Ada woman began looking for a unique way to celebrate the occasion. An experienced runner who has competed in several marathons, Rustin wanted to tackle a new challenge.

She found it in the Pikes Peak Ascent and Marathon, a trail race which starts at the base of Pikes Peak in Manitou Springs, Colorado, and ends at the top of the 14,115-foot mountain. This year’s race took place Aug. 24 and 25 — right after Rustin turned 40.

“I was poring through all the different races to do, and Pikes Peak popped up, and I was like, ‘That’s the one I want to do,’” Rustin said. “So then from there, it was a matter of talking to some of my dear running friends and trying to convince them to take on the challenge with me.”

The race is divided into two legs — the Pikes Peak Ascent, which goes the mountain, and the Pikes Peak Marathon. The second leg follows the same route as the first but descends from the summit.

Rustin decided to compete in the first leg of the race, a half-marathon.

Turning 40 was a major milestone for Rustin, so she wanted to prove that she could still do crazy, difficult things. The Pikes Peak race appealed to her because it was a destination race and offered a new way to test her ability.

“The challenge of the altitude was probably the greatest thing because really, here in Oklahoma, we have really no way to prepare for that,” Rustin said. “And so, it was kind of like going out into the big unknown. And so, that’s why Pikes Peak.”

She signed up in January for the Pikes Peak Ascent, scheduled for the day after her birthday. She also persuaded seven other friends and relatives, including her brother and her husband, to join her. Everyone in the group belonged to the Crossroads Running Club in Ada.

People who want to enter the Pikes Peak event must qualify by running another marathon in a certain amount of time. For Rustin’s husband, that meant successfully completing a separate half-marathon before he could run alongside Rustin at Pikes Peak.

Rustin trained for the race by following her normal running routine in Ada, which doesn’t offer any opportunities for altitude running. Because they needed some experience with altitudes, she and her husband went to New Mexico and hiked in higher-elevation areas.

Rustin and the rest of the group qualified for the Pikes Peak race by competing in this year’s Fireball Classic Memorial Run, which took place July 4 in Wintersmith Park. Rustin finished second overall in the Fireball half-marathon, and the others earned qualifying times in the 10K and 5K races.

The group left for Manitou Springs on Rustin’s birthday, Aug. 23. That was intentional, because the group’s research had convinced them they didn’t want to spend a lot of time in Manitou Springs, waiting for race day.

“From everything we understood, the less time you spent to deplete your body, the better shape you would be in just to get up it,” Rustin said.

The group arrived in Manitou Springs the afternoon of Aug. 23, had dinner and went to bed so everyone could rest before the big day.

Both the Pikes Peak Ascent and the Pikes Peak Marathon began at Manitou Springs City Hall and followed Barr Trail in Pike National Forest, located on the east face of Pikes Peak, according to the website pikespeakmarathon.org. The trail was winding and narrow, making passing other runners difficult or impossible.

Rustin said she was nervous about the race because she did not know what running at that altitude would be like, and she wasn’t sure how her body would react. But she said she was also excited, because she was determined to make it to the top of Pikes Peak.

“If I had to crawl, I was going to make it to the top,” Rustin said.

She said the trail was fairly challenging, mainly because there wasn’t much oxygen and movement was difficult. But she knew that other people were doing the same thing, which created a sense of camaraderie.

Rustin and her friend Joe Osborn ran the entire race together and crossed the finish line at the same time. She said she would not have traded the experience of completing the race with her friend for anything in the world.

“It was just the best to have somebody there with me step for step,” Rustin said. “When he was feeling really strong, I might be having a down spot and he would say something to encourage me and vice versa, like if he was feeling kind of low. So we stayed pretty positive — and it was cool to cross the finish line together.

“And it was really cool to see all our friends cross as well.”

Rustin said race officials tell runners to turn around and go back if they don’t reach certain milestones on the trail by a certain time. Everyone in Rustin’s group made it to the top before officials could turn them around, and Rustin and her friend Joe Osborn crossed the finish line together.

Rustin and Osborn both completed the race in four hours and 55 minutes — double the time it normally takes Rustin to finish a half marathon. After they finished, the two discovered a shop at the top of Pikes Peak that sold doughnuts — so they enjoyed doughnuts and coffee and waited for the other runners in the group.

After the race, the runners took a bus back to Manitou Springs.

Rustin said the experience showed her that she is not afraid of new adventures.

“I learned — especially in retrospect of where I was maybe 20 years ago or 10 years ago — that I think with age, I’m more likely to take on a challenge and not let fear deter me,” she said. “I would just encourage people out there: Whatever that challenge is, just don’t sit back and let life slip by. Just take it on.”