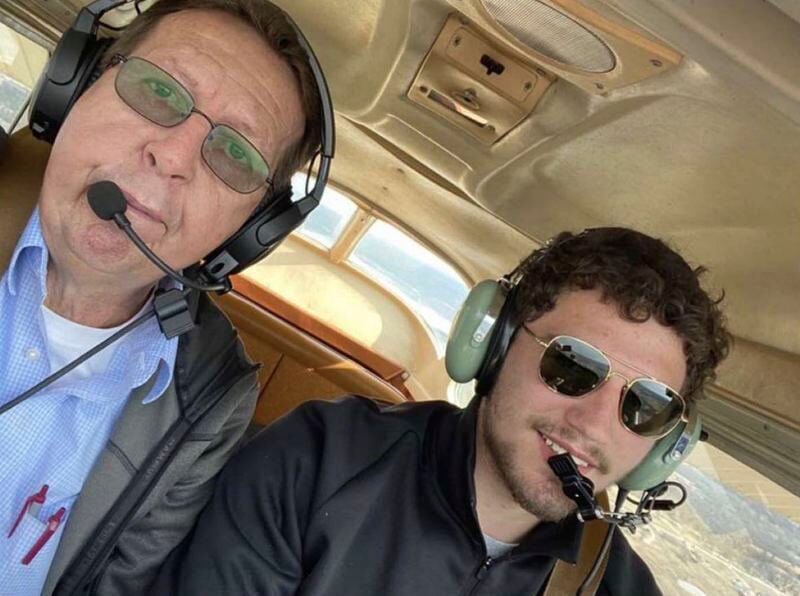 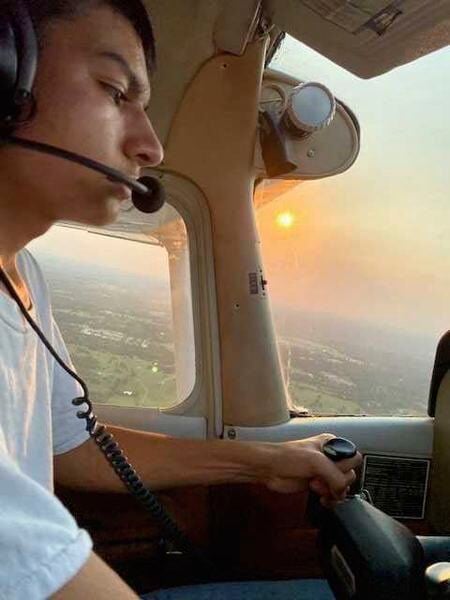 SubmittedAustin Sloan, Chickasaw student, flies out of the airport in Ada.

SubmittedAustin Sloan, Chickasaw student, flies out of the airport in Ada.

For two Chickasaw students, youthful dreams of piloting an airplane are being realized thanks to a rare opportunity afforded them by Ada School System’s aviation program.

Eric Pulliam, a senior at Ada High School and Austin Sloan, a junior, tell similar stories of discovering their love of flight at an early age.

“When I was younger, my parents got me this big book of military jets,” Eric said. “I thought they looked cool and ever since then I’ve found a way to continue my interest in it in different ways.”

Austin said his interest was sparked when his father gave him a set of toy airplanes.

“When I was four or five, my dad got me for Christmas a little airplane set that came with about 40 different airplanes,” he said. “Ever since then they have just seemed very interesting to me. I always watch old war moves with airplane scenes.”

Today both students are flying real airplanes and getting ever closer to earning their coveted private pilots’ licenses.

Eric, 17, flew his first solo flight in February and has done so multiple times since then. “I’ve already landed at tower airports and flown and landed at night,” he said.

Paula Kedy, retired educator and administrator with Ada City Schools, was in on the ground floor getting the program started. It began with a phone call from local pilot and architect Don Childers and others who asked her, “If we pay your way to Seattle, would you go to a STEM (Science, Technology Engineering and Mathematics) aviation conference?”

It was there that she learned about the AOPA program. Ms. Kedy, a former English teacher, admits that she felt like a fish out of water listening to technical jargon about flying. “But at the end, they said, ‘If anybody here is interested in applying to test this curriculum, here is the application.’

“We brought the curriculum in and started on one section of aviation 1. We had 16 or 17 kids there in that class that year. They are now seniors,” she said.

Mrs. Kedy currently serves as aerospace and aviation education program coordinator for the Oklahoma Aeronautics Commission. Part of her responsibilities is to inform other educators about the program.

“Superintendents are interested because they see how interested the kids are,” Mrs. Kedy says. With state budget cuts the rule rather than the exception, the issue is money. While the curriculum is provided free, other required materials are not. Flight simulators alone cost $4,500 to as much as $10,000 each.

Ada City Schools funding has come from grants from the Oklahoma Aeronautics Commission, American Airlines and those available through the Carl D. Perkins Career and Technical Education Act of 2006. Among other items, this has allowed Ada City Schools to install eight flight simulators at the high school and four at the junior high. Another five simulators are on order.

Children as young at pre-k are made aware of the program with what Mrs. Kedy refers to as “‘A’ is for airplane.”

Seventh and eighth grade students can take technical education classes that touch on aviation in which they fly drones and learn about avionics and flying in general.

Serious instruction begins as an elective in ninth grade under Stefanie Tweedy. Chris Eckler teaches Aviation 2, 3 and 4 at Ada High School, electives available to any student interested in learning about aviation.

“Students in year two and three get a lot of simulator time. They are figuring out how an airplane works and getting to visualize it on the simulator. Year three is more weather and flight planning and learning how to read sectional charts and mapping. They fly the courses they map out on the simulators.”

Mr. Eckler says science and math are required when students plan flights. “In year two students calculate weight and balance,” he said. “They look at a Cessna 172, for example, and learn that just because there are four seats doesn’t mean they can take four friends with them because the plane may not be able to carry that much payload off the ground.

“You have to think about how much they weigh, how much their baggage weighs, how much fuel you’re carrying on board and how hot it is outside. Depending on how hot it is, the runway might not be long enough to generate enough speed to pick yourself off the ground.”

He said most of the math required is simple arithmetic with some geometry thrown in. “It’s not super hard math, but there’s a lot of science involved. Year three students learn a lot about meteorology. We talk about density of altitude, that is, how thick the air is, air pressure and everything else that affects the aircraft.”

Mrs. Kedy says while the in-school classes are made available to students at no charge, learning to fly in a real airplane is not. “To get your full private pilot’s license is about $6,000 or $7,000,” she said.

Chance Plett, Chickasaw Nation employee and recreational pilot, worked with board members of Ada’s Experimental Aircraft Association chapter to coordinate and help shoulder some of the expense.

“We felt like we needed to go to the next level,” Mr. Plett said. “We wanted to not just teach the physics of flying or theories of rockets in the classroom; we wanted to get students in an airplane, teach them to fly and obtain a pilot’s license.

To that end, board members formed the Ada Schools Aviation Program (ASAP) to raise money for scholarships to support students.

The Chickasaw Nation, area banks and other local businesses contributed to the scholarship fund.

“I see the ASAP Foundation role as one of providing opportunities students just can’t get in the classroom. The curriculum the school uses goes all the way from elementary, to middle, to high school. It goes over all facets of aviation.

“It includes field trips, hands-on activities and experiencing flight in simulators. It’s a great curriculum, but you’re limited by the school classroom and what you can do there. ASAP’s role is to give that experience a boost,” Mr. Plett said.

“We want to go to that next step, which for us is the most exciting step, the really cool step. You’ve learned all about airplanes and now you get to fly one. Now we can take you from the classroom to the sky. That’s what we do.”

Bill Bailey, former Southwest Airlines pilot and ASAP president, said earning one’s private pilot’s license requires 40 flying hours and passing a written exam. Twenty of those hours are with a flight instructor and 20 are flying solo. Sixteen is the minimum age to fly solo and one must be at least 17 to receive a private pilot’s license.

It takes 200 hours of flying time to qualify for a commercial pilot’s license.

Mr. Bailey said ground school is where students learn a great deal of information to keep future pilots safe once they take to the skies.

“Ground school is where you learn the rules and regulations and a lot about navigation and understanding weather. It’s a general overall view as to what you will face as a pilot just flying from A to B. There are several ways to do that. There are home study courses and even weekend cram courses,” he said.

“As a military pilot, you have to have a college degree and you get a series of tests and then go to pilot training.”

Mr. Bailey says there are flying opportunities that don’t involve major airlines. “Everybody looks at the airlines as reaching the pinnacle of the jobs, but (for example) here in Ada you’ve got the Chickasaw Nation who has great equipment and great jobs.”

Mr. Bailey said all students requesting ASAP scholarships have received funding due to one trait board members have seen in each candidate.

“I think most of us on the committee want to see a passion, and usually you can see that in the way a kid writes. We’ve been very fortunate that, so far, everyone who has applied has received a grant because they all had tremendous passion about wanting to get into aviation. That’s what we want to create – a passion,” he said.

Piloting is not the only avenue for getting into the aviation industry.

“It’s not just about flying,” Mr. Bailey said. “My desire is for us to be able to introduce the mechanics program for those kids that aren’t interested in flying but are pretty good at turning a wrench.”

Eric Pulliam and Austin Sloan have taken to the sky and both now plan to ascend to an even higher level. Eric has signed a commitment with the Navy to enter its nuclear program upon graduation next year. Later, he hopes to enter college and the Naval Reserve Officers Training Corps to eventually become a pilot.

Austin is planning to enter the aviation program at Southeastern Oklahoma State University upon graduation and to eventually fly commercially.