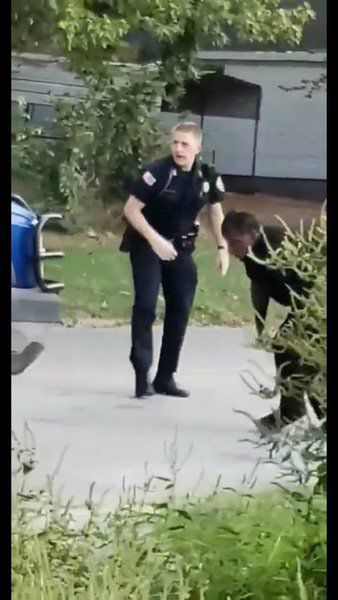 Investigation continues into the death of an Ada man following a confrontation with police Friday near a northwest Ada apartment complex. 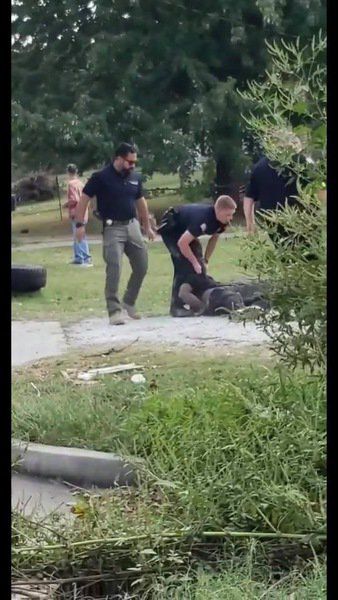 Ada police officers can be seen with Anthony Ray Meely in this screenshot from a bystander’s video provided to The Ada News. Meely died Friday after an altercation with police near a northwest Ada apartment complex

Investigation continues into the death of an Ada man following a confrontation with police Friday near a northwest Ada apartment complex.

Ada police officers can be seen with Anthony Ray Meely in this screenshot from a bystander’s video provided to The Ada News. Meely died Friday after an altercation with police near a northwest Ada apartment complex

An Ada man died Friday after an altercation with Ada police at a northwest Ada apartment complex.

Anthony Ray Meely, 36, of Ada collapsed after a confrontation with police, during which, police say, Meely repeatedly ignored instructions to stop while attempting to evade an officer. Meely later died in an ambulance while being treated by Mercy EMS paramedics.

In videos posted to various social media networks, Meely can be seen running from an officer, struggling to break free as the officer grabs Meely and tries to wrestle him to the ground. During the struggle, Meely can be seen resisting efforts to subdue him, including at least two punches by the officer before Meely breaks free and continues to try to evade capture. Meely was taken into custody after passing motorists came to the officer’s aid.

Records indicate police were called to an address in the 700 block of West Cottage Street in Ada regarding a “disturbance.” Upon arrival, Ada Police Officer Tyler Pogue reported seeing Meely “running across the parking lot of the Emerald Pointe Apartments towards the west.” Pogue said when he got out of his patrol car, he was told by “a female and some children” that Meely was causing the disturbance.

Pogue reports walking toward the location where he last saw Meely and spotting him near the apartment playground. According to Pogue‘s report, when he tried to make contact with Meely, Meely began walking away from him toward the woods between Oak Street and the apartment parking lot.

“I advised him to stop, (saying) that I just wanted to talk to him and that is when he took off running,” Pogue wrote in a report narrative. “He ran through the woods towards Oak.

“I followed him through the woods. When I came around (a house), I noticed (Meely) trying to get in a vehicle that was driving on Oak.”

Records indicate a struggle ensued when Pogue ordered Meely to sit down in the yard of a nearby house. Pogue reports Meely initially kneeled, but when he went to handcuff him, Meely stood up and Pogue “grabbed him” by the arm.

“...I attempted to get his hands so I could put handcuffs on him but he was dripping with sweat and I lost grip of his hand and he got free from me, in the process hitting me in the right side of the head,” Pogue wrote. “He went back to the road and attempted to get into another vehicle but they started to drive off. So he grabbed the spoiler of the vehicle and it drug him for a few seconds.”

“I holstered my weapon and started to follow him,” Pogue wrote. “When I got close enough to him I took him to the ground again.”

Records indicate Pogue continued to struggle with Meely until two passing motorists stopped and helped him hold Meely down until another officer arrived. Once police had Meely handcuffed, records indicate, they tried to stand him up, at which point he collapsed and became unresponsive.

Mercy EMS paramedics were called to the scene. Upon their arrival, paramedics began treating Meely. Mercy EMS officials said Meely was breathing but not responsive when they arrived. Meely died before reaching the hospital.

Controversy spread through social media networks Saturday and Sunday as friends, family members and others speculated about the cause of Meely’s death and criticized police handling of the incident. Some speculated that Meely died as a result of being tased by responding officers.

City officials said Pogue was not carrying a taser on him at the time of the altercation and adamantly denied that a taser was used at any point during the confrontation.

Mercy EMS officials independently confirmed they were not asked to remove taser barbs from Meely’s body, nor were they notified that he had been tased by police. Mercy EMS officials said they noted no evidence that Meely was tased prior to their arrival.

The incident remains under investigation at this time. More information will be provided as it becomes available.