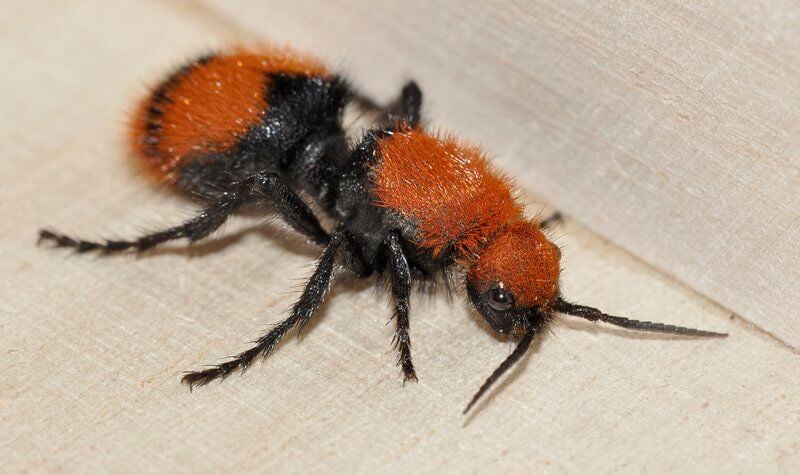 This is a female cow killer that I captured and studied for a couple of hours before releasing it where I found it. Note that overall, it is black with orange-red coloring on its head, thorax and abdomen. 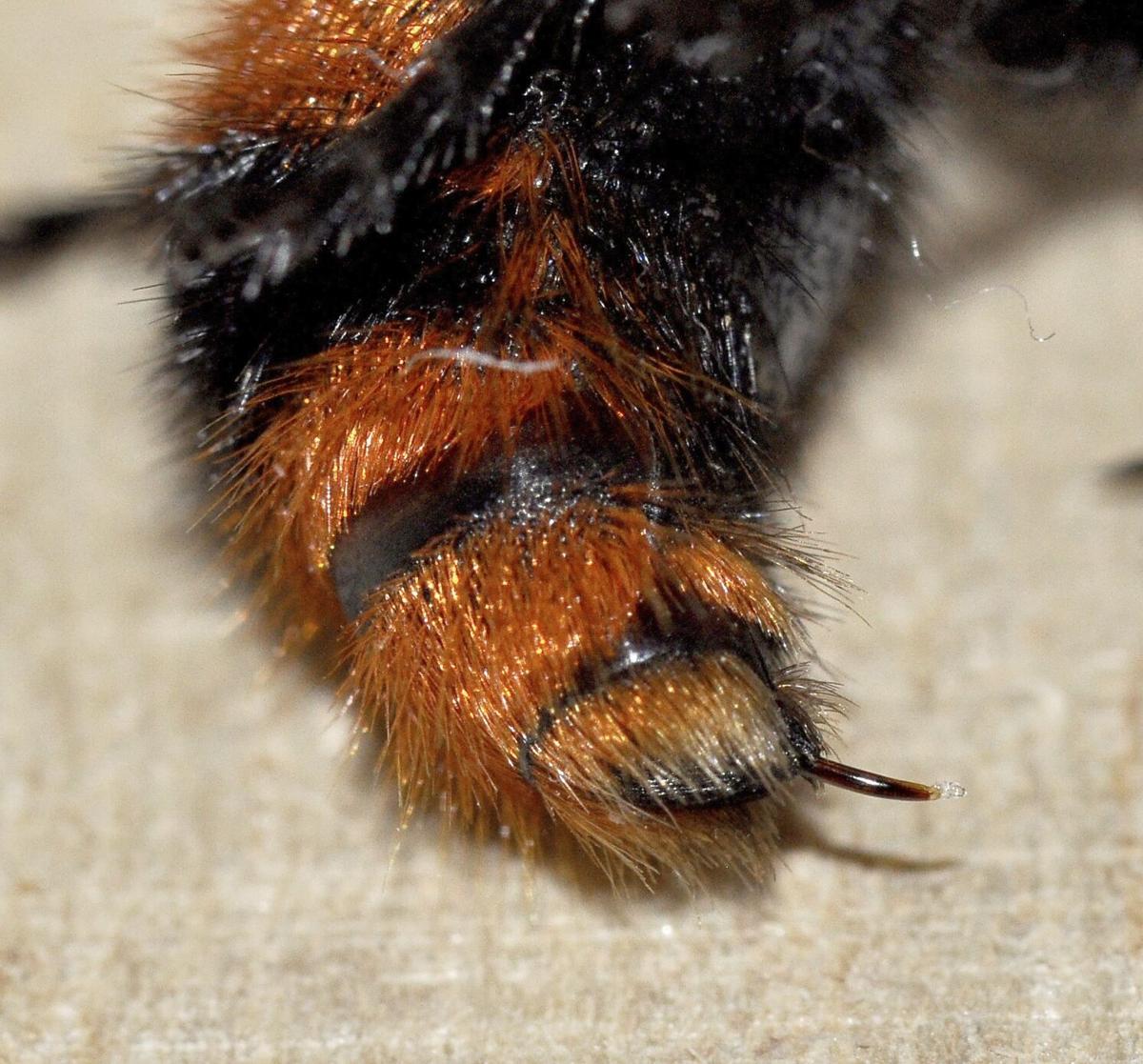 In this photo, note the female cow killer's overpositor/stinger is visible. However, the ovipositor can extend much longer -- perhaps five time what is shown -- and can deliver an extremely painful sting.

This is a female cow killer that I captured and studied for a couple of hours before releasing it where I found it. Note that overall, it is black with orange-red coloring on its head, thorax and abdomen.

In this photo, note the female cow killer's overpositor/stinger is visible. However, the ovipositor can extend much longer -- perhaps five time what is shown -- and can deliver an extremely painful sting.

And while the cow killer resembles, and is often called, an ant, Dasymutilla occidentalis it is actually a species of wasp.

They are also called eastern velvet ants and cow ants.

I've seen some things floating around on social media full of misinformation about cow killers, so I'm hoping to clear up some things.

First, they don't actually kill cows. There is absolutely no evidence that this species has ever killed a cow.

And, their venom is relatively low in toxicity -- less than that of a honey bee. However, the pain from a sting is said to be immense. Much more so than a bee sting.

People who've been stung describe the pain as excruciating. And perhaps that is where the misinformation comes in. But it could also be because of the cow killer's massive size.

Now, I have never been stung by one, and I don't plan on it any time soon. However, there is a man on YouTube, Coyote Peterson, who often allows himself to be stung by all sorts of insects.

And his reaction to the sting of a cow killer appeared to indicate it was very painful. To see this, visit https://www.youtube.com/watch?v=EF-oSVCCqzU&amp;t=636s.

- People sometimes call "velvet ants" wingless wasps, but that's only half true. But more on that in the description.

- As I mentioned previously, cow killers are not really aggressive. And most stings occur when they are handled, or stepped on while barefoot.

- These insects have very tough exoskeletons, and often give a warning sound when provoked.

- Adults are most common during the warm summer months, and are more commonly seen in late summer.

- They are typically most active at dusk or during the night, but I see them during the day from time to time.

- According to Dr. Jody Green, Nebraska Extension Entomologist, "They are not aggressive and are not dangerous to humans or pets, and their venom is not medically significant."

Dasymutilla occidentalis grow to about one inch in length. They are black overall, with patches of dense orange-red hair on the head, thorax and abdomen (see photo).

Males actually resemble wasps. They too are velvety, but have fairly large dark brown wings. If you see a velvet ant with wings, rest assured, it is a male. And although capable of flight, males are incapable of stinging, as they lack stingers.

Cow killers are sometimes called "red velvet ants," but that name actually belongs to Dasymutilla magnifica. These wasps are similar to cow killers, and are also found in the Ada area.

However, growing to a maximum length of seven-eighths of an inch, they are slightly smaller than cow killers. Dasymutilla magnifica are black overall, and have coloration -- burnt orange -- on the abdomen only. I will feature that species in a future column.

Dasymutilla occidentalis can be found all over Oklahoma, and inhabits the Eastern United States from the Plains States eastward. Cow killers belong to the family Mutillidae, a family of more than 7,000 species of velvety wasps which are found all over the world.

Mostly open sandy areas, and pastures. But they are sometimes wonder across suburban and urban residential yards.

Adults drink nectar. Cow killers are solitary, and they are parasitic to ground nesting wasps and bees -- such as cicada killers and bumble bees. Females lay eggs in the nests os the wasps and bumble bees, and, once the eggs hatch, the larvae feed on the host's larvae.

(Editor's Note: Randy Mitchell is a freelance writer and photographer. He has been an avid birdwatcher, nature enthusiast and photographer for more than 40 years. Reach him at rnw@usa.com.)