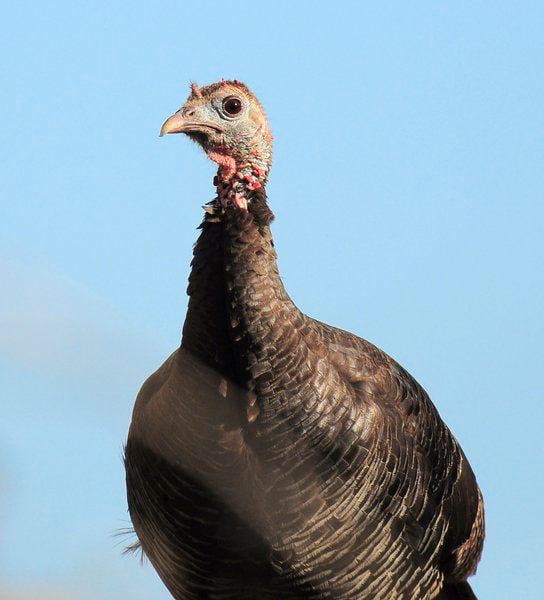 A female wild turkey — called a hen — walks along in search of food. Notice that she is brown overall, and her feathers extend nearly all the way up her neck. 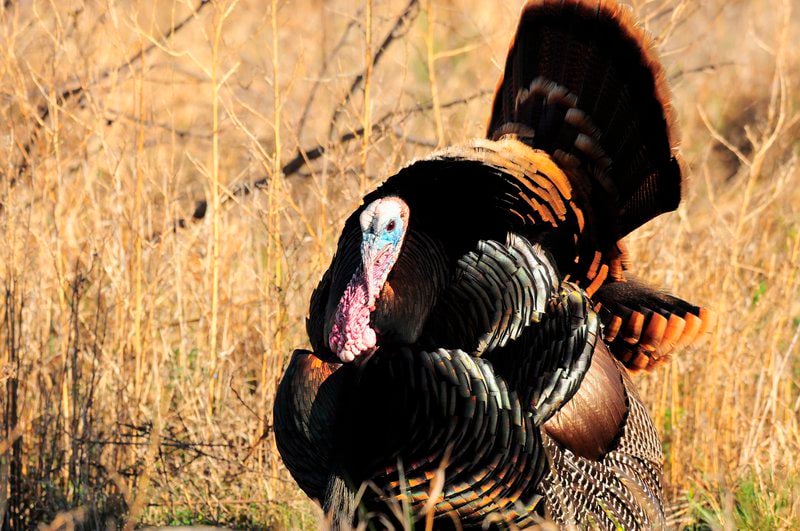 A male gobbler fluffs out his feathers during courtship. 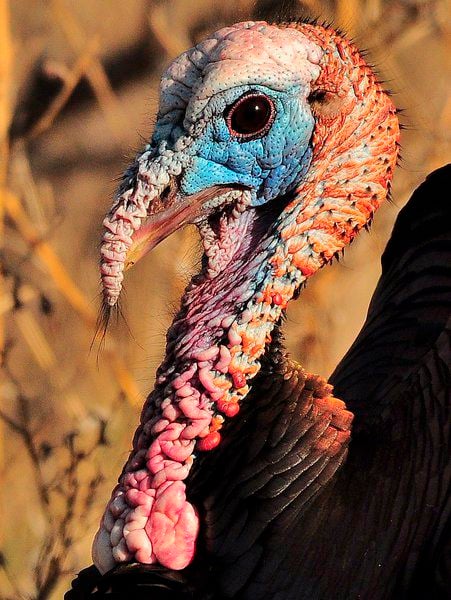 A male wild turkey extends his snood, the fleshy protuberance above his beak, as part of a larger effort to attract females with which to mate. Notice the white crown of his head — this is common in spring. His face — red, white and blue here — can change colors depending on his mood. He can also retract his snood when he is agitated or scared.

A female wild turkey — called a hen — walks along in search of food. Notice that she is brown overall, and her feathers extend nearly all the way up her neck.

A male gobbler fluffs out his feathers during courtship.

A male wild turkey extends his snood, the fleshy protuberance above his beak, as part of a larger effort to attract females with which to mate. Notice the white crown of his head — this is common in spring. His face — red, white and blue here — can change colors depending on his mood. He can also retract his snood when he is agitated or scared.

With the holidays upon us, I find myself having to turn my lens in another direction. I thought, due to the newsroom’s short week, this might be a good time to revisit an old favorite.

The wild turkey is a very intelligent bird, and is quite popular this time of year, so it seems like the perfect time to take another look. Here is one my favorite columns on the wild turkey. I hope you enjoy revisiting it as much as I did.

Over the years, I have observed, read about and photographed wild turkeys quite a bit. I thought I knew just about everything about them until I watched an episode of the PBS show “Nature” titled, “My Life as a Turkey.”

It is an account of an experiment conducted by naturalist Joe Hutto. It won an Emmy Award and is based on the book “Illumination in the Flatwoods,” written by Hutto, who also co-wrote the show.

I don’t have enough space to write about all the remarkable things that occurred, but I can say it is an amazing show, packed with knowledge of wild turkeys for anyone interested.

If you haven’t seen the episode, I highly recommend it. It is in season two, episode two of “Nature.” Or you can read Hutto’s book.

Turkeys are now abundant in Oklahoma, but, for a while, they weren’t. After settlers moved in, wild turkeys were overhunted and nearly killed off.

In fact, early in the 20th century, wild turkeys almost disappeared from the United States, due to overhunting and habitat loss.

But around the middle of the previous century, the Oklahoma Department of Wildlife Conservation began reintroducing the birds in parts of Oklahoma; first in western counties and then, during the 1970s, the eastern counties.

And, just in case you’re wondering, turkeys can fly, up to 50 miles per hour for short distances. They can also run up to 25 miles-per-hour. They can even swim, if necessary.

According to the Oklahoma Department of Wildlife Conservation, there are three subspecies of wild turkey in Oklahoma, but only two in the Pontotoc County area: the Rio Grande and the Eastern.

The vast majority of wild turkeys found in Pontotoc and Coal counties are the Rio Grande, or Rio Grande-Eastern hybrids.

The differences between the subspecies aren’t huge, so I won’t get into that. The following description will concern the Rio Grande variety.

I will start with male turkeys, also known as gobblers or toms. After all, because they must fight for and impress females, males have most of the bells and whistles.

Although males can appear to be almost black, their body feathers are an iridescent green and bronze. This can be seen when the sun shines on a bird.

One thing I can say for sure is that when a tom turkey fluffs out his feathers during courtship and the sun is shining just right, you can see all the colors in full bloom. It’s quite impressive.

The male also has a modified feather called a beard. It looks like a horse’s tail and can be an indicator of age. It hangs down from the bird’s breast and can grow to 12 inches or so. Females can sometimes have beards, but they are much shorter.

The feathers on a male do not extend all the way up the neck.

And speaking of neck, let’s get to that and the head. Because that’s where things get interesting.

The head and neck can range from pink to red, white and blue. The colors change depending on the bird’s mood. The crown of an adult male wild turkey is white in the spring, while its face is mostly red and blue.

Now, the following information is not easy to explain.

Males have a fleshy protuberance above the beak called a snood. The snood can change in length, depending on the bird’s mood. When agitated or scared, the snood is often kept a short nub. When the bird is excited or trying to impress a female, the snood fills with blood, grows much longer and dangles to the side.

And, when a female — called a hen — is choosing a male with which to breed, the size of the snood is part of the deal. The longer the better as far as the hens are concerned. Insert joke here.

But all joking aside, Dr. Richard Buchholz, an associate professor at the University of Mississippi, has conducted research showing that a long snood may indicate a healthier bird.

Buchholz wrote, “Data on the parasite burdens of free-living wild turkeys revealed a negative correlation between snood length and infection with intestinal coccidian, a deleterious protozoan parasite. That is, in the wild the long snooded males preferred by females and avoided by males seemed to be resistant to coccidia infection. I have suggested that this is a case of female choice for male ‘good genes.’ Females may be choosing coccidia-resistant males as mates so that their own offspring will inherit resistance genes and be more likely to survive.”

The gobbler’s snood can also change color when the male is excited.

Hens also have snoods, wattles and caruncles. However, they are not nearly as large as those on the males.

Females are brown overall with darker barring on many of the feathers. Also, their feathers extend almost all the way up the neck.

Turkeys travel in flocks and, when young, they eat lots of insects and spiders. As adults, their diet shifts to more plant-based.

In the Pontotoc County area, wild turkeys like open woods and nearby clearings.

In the spring, when mating takes place, male turkeys will attempt to attract any female they can by fluffing their feathers, fanning out their tails and strutting around. This includes dancing.

Toms drag their wing feathers along the ground to warn younger male turkeys — called jakes — to stay away. Sometimes fights break out.

One male will mate with several females.

According to the National Audubon Society, turkeys nest on the ground, usually at the base of a tree.

The Cornell Lab of Ornithology reports that the female will lay four to 17 eggs. Incubation lasts about four to five weeks. Nestlings are born pretty much ready to go. They can hunt after one day.

One thing I’ve seen that truly impresses me is, when a mother hen is out hunting with her poults, she keeps a vigilant eye out for predators. She is almost constantly scanning the area around her family and surveying the sky. Poults are preyed upon by just about every predator, from snakes to hawks.

When she sees danger, she will make an alert call to her poults, at which time they will hide in tall grass or other vegetation. It is really quite impressive.

Wild Turkeys can be found all over Oklahoma and the United States.

• Male wild turkeys are the ones who make the gobble-gobble sounds. Hence the term “gobbler.”

In a letter penned to his daughter, he called bald eagles “dishonest” and referred to them as thieves, as they will sometimes steal fish originally captured by ospreys.

• After wild turkeys were nearly hunted to extinction, the situation was so bad that a Dec. 19, 1912, editorial in the Aberdeen Herald stated: “These are diminishing so fast that 1920 will see the finish of the turkey tribe unless the authorities take a hand.”

And the authorities did take a hand, and thanks now to bag limits and restocking, turkeys have recovered immensely all around the country.

• Wild turkeys have vision greater than humans, and they can detect motion from a long way away.

• The wild turkey is the state game bird of Oklahoma.