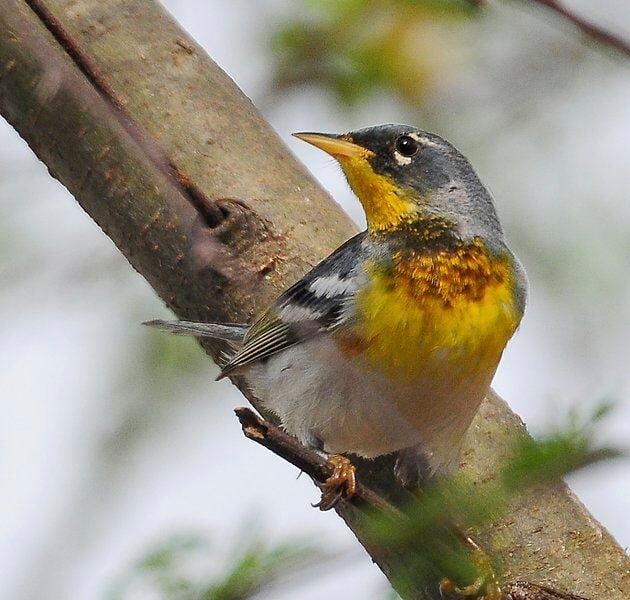 Photo by Randy MitchellA male northern parula perches on a tree branch. Note the black and chestnut band across the chest. Females often lack this coloring. Also note the white eye-crescents, which give the bird a “sad” look. 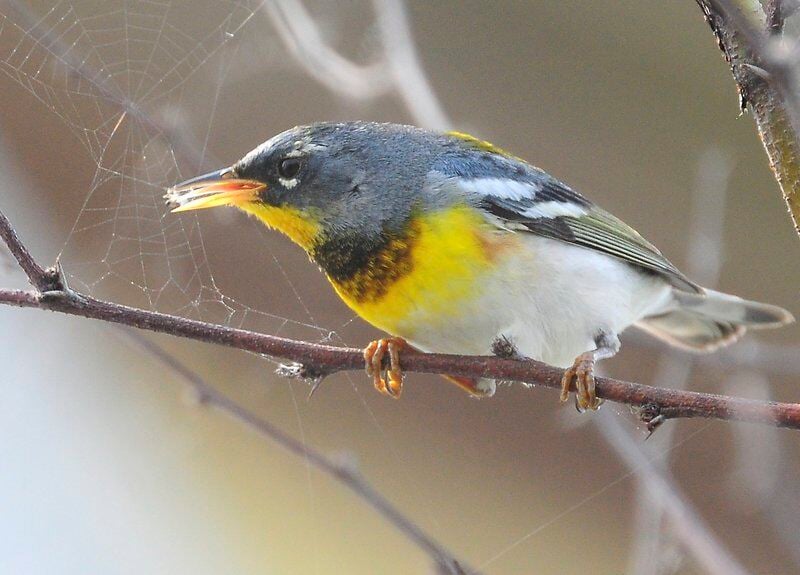 Photo by Randy MitchellA male northern parula uses its tongue to help snatch a spider from its web. Spiders and insects make up the bulk of the bird’s diet.

Photo by Randy MitchellA male northern parula perches on a tree branch. Note the black and chestnut band across the chest. Females often lack this coloring. Also note the white eye-crescents, which give the bird a “sad” look.

Photo by Randy MitchellA male northern parula uses its tongue to help snatch a spider from its web. Spiders and insects make up the bulk of the bird’s diet.

The northern parula is a summer resident in the Ada area, but it may sometimes go unseen by many due to its tiny size.

It is a warbler, and, is one of North America’s smallest wood warbler species.

During April, many species of warbler will pass through the Ada area. And some species will call the area home for the summer.

Even though wooded areas will be crawling with these beautiful birds, many will go unseen. Again, because of their small size.

For me, the best way to see warblers is to stand or sit under a large tree, such as an oak, and look up. Watch for their movements, then look through binoculars or a long-lensed camera to zero in and identify the species.

Warblers love to search in and on top of tree canopies for food, particularly caterpillars and insects which hide among leaves and tree flowers.

Also, waiting in a wooded area and listening for warbler calls and songs is another great way to locate them.

Warbler migration should reach fever-pitch in the last week of April. However, mid-April to about May 10 should produce many good sightings.

At just 4.5 inches in length, the northern parula is barely larger than a chickadee.

The male northern parula is mainly blue-gray above with two conspicuous white wing bars and partial white eye-rings. The male also has a bright yellow throat and breast, along with a black and chestnut band across the breast (photos).

The female is similar to the male, but duller and generally lacks the breast bands.

Both male and female have an olive patch the back.

The northern parula breeds and nests in the eastern half of Oklahoma. Many agencies list the Ada area as being west of the bird’s breeding range, however, I’ve seen them here during that time. Also, the Tishomingo National Wildlife Refuge and Chickasaw National Recreation Area list the bird as nesting locally, so I think it’s a safe bet that the bird does nest here.

However, being that it requires specialized nesting materials, northern parulas may be somewhat uncommon. However, they are quite common during spring migration.

Northern parulas winter in Mexico, Central America and many islands in the Caribbean.

According to the Cornell Lab of Ornithology, northern parulas breed in mature forests along streams, swamps and other bottomlands. However, during migration, I have observed these birds in many deciduous trees within the city of Ada.

However, the National Audubon Society reports that when no lichens or Spanish moss is available, nests are also constructed of dangling clumps of twigs or pine needles, or placed in rubbish left by floods in branches hanging over a stream.

According to the Cornell Lab of Ornithology, a female will lay two to seven eggs, which are incubated for about two weeks. Nestling period is about 11 days.

- According to the Cornell Lab, some bird names are hard to pronounce, and the northern parula has started its share of lively debates. Most people say “par-OOH-la” or “PAR-eh-la,” while others say “PAR-you-la.”