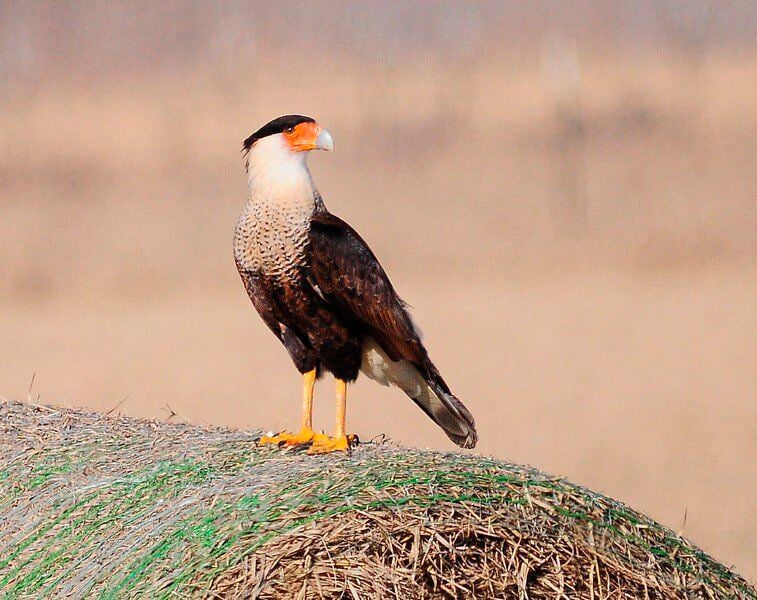 A crested caracara sits atop a bail of hay. Note the overall long appearance and long legs. 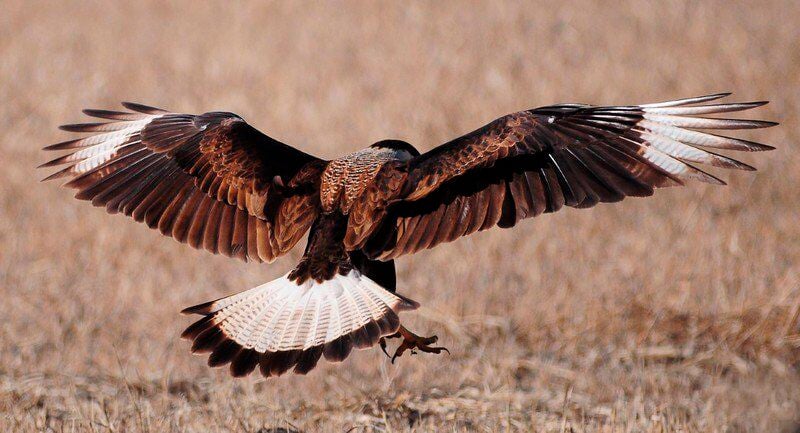 A crested caracara lands in a hayfield. Note the white on the tail and outer wings. 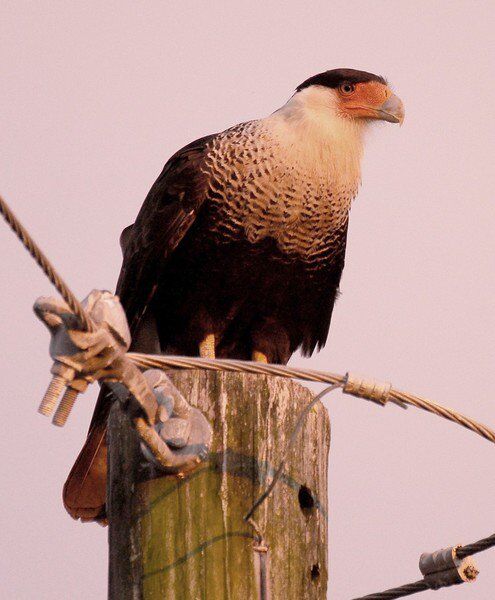 A crested caracara sits atop a utility pole. Note the white neck, flat head with a black cap, and orangish facial skin. 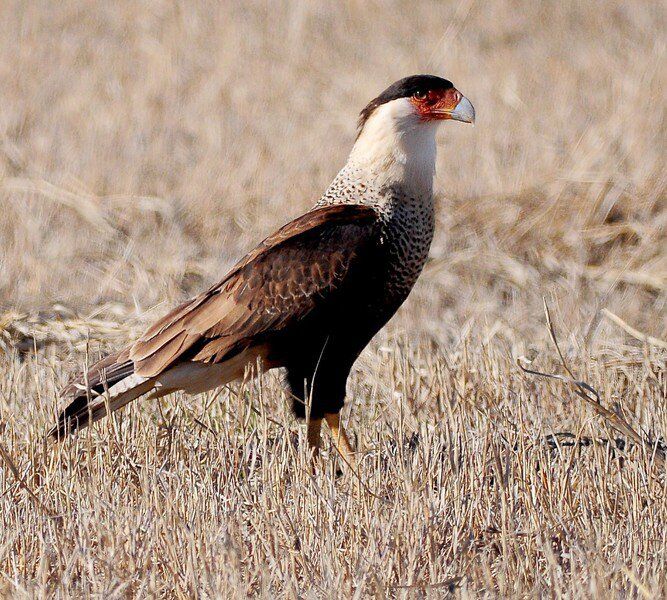 A crested caracara walks in a hayfield. These birds are often seen walking through pastures searching for food. This particular bird was waiting for the leftovers of a rabbit of which was captured by a

A crested caracara sits atop a bail of hay. Note the overall long appearance and long legs.

A crested caracara lands in a hayfield. Note the white on the tail and outer wings.

A crested caracara sits atop a utility pole. Note the white neck, flat head with a black cap, and orangish facial skin.

A crested caracara walks in a hayfield. These birds are often seen walking through pastures searching for food. This particular bird was waiting for the leftovers of a rabbit of which was captured by a

It’s hard to believe the crested caracara has finally arrived in the Ada area, but it has.

What’s even harder to believe is it seems to have skipped the southern portion of Oklahoma and landed straight down near Tupelo in Coal County.

I must say I’m pretty happy about it. However, I really thought its range expansion would be more gradual. And, it still may be as this bird is still a fairly rare sight even in North Texas.

The crested caracara’s range has been gradually expanding to the north, through the heart of Texas.

I’ve had an affinity for these birds since I was a kid. I was fascinated by the multi-colored head -- the featherless face and black mohawk.

To my young eyes, they looked a cross between an eagle and a vulture, but they are actually falcons.

Of course, back then, I had only seen photos or paintings of them in the pages of bird books.

I was an adult before actually seeing one with my own eyes. I was surprised to see it walking around in a pasture in South Texas.

Its legs were somewhat long, and, to me, it resembled a secretary bird from Africa. A more compact version, of course.

So, when I saw that a resident reported seeing and photographing at least one west of Tupelo, confirmation was a must. And confirmed it was as many birders have seen and photographed it since.

It turns out there are two birds -- presumably a breeding couple -- and they are most often seen where County roads 3690 and 1650 intersect in Coal County.

And local residents along those roads were surprised to see cars parked along the dirt roads at all hours of the day with people looking through binoculars.

One passerby told me the increase in traffic was surprising, and many people wondered about cattle theft as it seems to be increasing in rural areas.

However, as it turns out, it’s just a bunch of bird fanatics from all over the state looking to add a rare bird to their list.

I made several trips down, but always seemed to get there too late. Oh well, I’m sure I will see them eventually. It’s only a 20-minute drive southeast of Ada after all.

As mentioned previously, these birds resemble eagles and vultures, and are about the size of red-tailed hawks.

Adults have white necks, black bodies and black caps atop flat heads. They have bare orangish facial skin and long, yellow legs. Bodies are rather long as well.

These birds are most common in the southern portion of Texas and much of Mexico. Their range is expanding into North Texas, however.

There are also smaller populations in Arizona and Florida.

Open areas form grasslands to deserts. I most often see them in the habitat in which the birds near Tupelo are being seen; pastures which are grazed by livestock.

Nests are typically constructed in the tallest tree around, according to the Cornell Lab of Ornithology. One to four eggs are laid and incubated for a little over a month. Nestling period is six to eight weeks.

- The Cornell Lab reports that the crested caracara is a common subject of folklore and legends throughout Central and South America, and, is sometimes called the “Mexican eagle.”

- The Lab also reports that the crested caracara is the only falcon that collects material to build a nest. Other falcons lay their eggs in an old nest built by another species, or in a scrape on the ground.

If anyone sees a crested caracara in the area, please send me an email (rnw@usa.com) and let me know when and where. Thanks!

For anyone interested, long-tailed ducks are being reported at Lake Overholser in the Oklahoma City area. I visited Thursday and observed and photographed a female bird in the very southwestern portion of the lake, and a very credible source located a sub-adult male Thursday near the northeast shore of the lake.