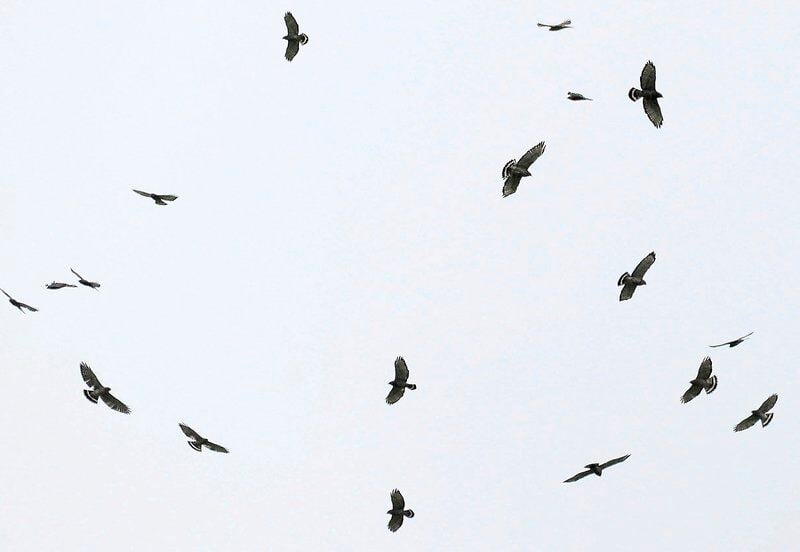 Several broad-winged hawks group together in what's called a kettle during migration. This was only a portion of the thousands involved. If you look closely, you can see not only the broad wings, but the broad tails with broad black barring as well. 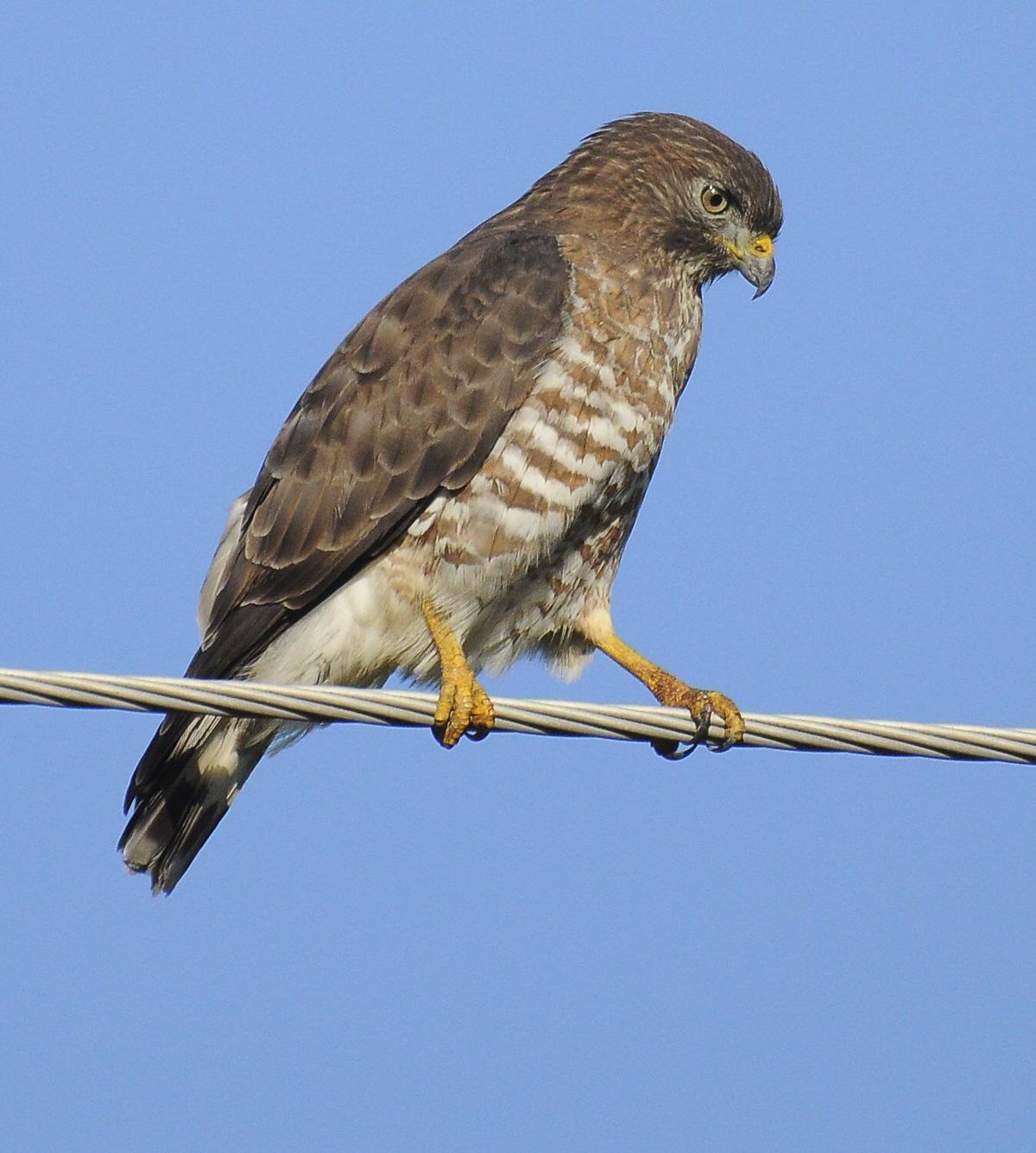 A broad-winged hawk perches on a utility wire as it watches intently for prey. Notice the dark brown wings, brown head and white underneath with copper barring. I photographed this bird near Mill Creek. 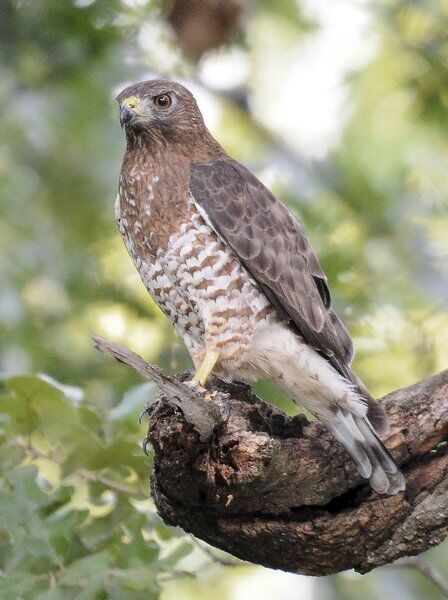 A broad-winged hawk perches on a tree branch. Note how the head is brown, but the bird's coloring becomes more copper down on the chest and the copper-colored barring on the belly. I photographed this bird not far from Wintersmith Park in Ada.

Several broad-winged hawks group together in what's called a kettle during migration. This was only a portion of the thousands involved. If you look closely, you can see not only the broad wings, but the broad tails with broad black barring as well.

A broad-winged hawk perches on a utility wire as it watches intently for prey. Notice the dark brown wings, brown head and white underneath with copper barring. I photographed this bird near Mill Creek.

A broad-winged hawk perches on a tree branch. Note how the head is brown, but the bird's coloring becomes more copper down on the chest and the copper-colored barring on the belly. I photographed this bird not far from Wintersmith Park in Ada.

In April, spotting a broad-winged hawk in Oklahoma reminds one that summer is just around the corner.

Well, it's mid-May, and I've seen quite a few of these stocky birds around Ada in the past month or so. Especially at Wintersmith Park.

So I thought it would be good to revisit this species, which I featured a few years ago.

For some areas of the state, “broadwings,” as they are sometimes called, are only passing through. But in about the eastern half of Oklahoma, which includes Pontotoc County, the birds arrive to take up residence and raise a family.

Many people don’t often get a chance to really observe the routine of this stout little hawk during the nesting season because it spends most of its time in the woods. Often the only time people catch a fleeting glimpse is when the birds fly across a roadway from one patch of woods to another.

Or maybe while someone is hiking, when the bird gets spooked from its perch in a woodland tree and flies away under the forest canopy, twisting and turning silently between tree branches.

The first time I saw a broad-winged hawk, I was a young teen hiking in the woods of northern Coal County. It reminded me of Henery Hawk, the strong little “chickenhawk” with the tough-guy bravado who was always after Foghorn Leghorn on Saturday morning cartoons.

During migration, massive numbers of broad-winged hawks will form groups called “kettles.” There can be hundreds or thousands or even tens of thousands of birds flocking together.

These flocking birds take advantage of thermal currents, in which the rising heat carries the birds high up so they can conserve much-needed energy and flap their wings less.

As a teen and still somewhat new to birding, I’d heard about this phenomenon, but I wasn’t too impressed back then. After all, “I’d seen these birds up close, why would I need to see large flocks,” I thought to myself.

Then, on a birding adventure one April, my son and I were traveling a highway in Texas near the border with Mexico. In the distance, I spotted a massive number of birds moving northeast across the horizon.

Thousands of broadwings, Swainson’s hawks and even turkey and black vultures were swirling around together. It was quite a sight.

It was like seeing the Grand Canyon for the first time — overwhelming and hard to explain. Photos or even videos could never do it justice.

We eventually drove close enough to pull over, get out and watch as these birds swarmed the sky while traveling northeast to their breeding grounds. It’s something we definitely want to see again.

There are hawk watches around the country where people gather to view these birds as they migrate in September. The hawk watchers along the Texas Coastal Bend seem to have the best views, as the hawks have formed the largest concentrations by then. These watches typically occur in the third week of September.

In Oklahoma, look to the skies in mid- to late September to catch a glimpse of broad-winged hawks heading south.

These birds, along with other hawks, were once thought to compete with hunters for small game. During the early part of the 20th century, they were slaughtered for that belief. However, laws protect them now, and they are doing well in this country.

According to the Cornell Lab of Ornithology, the largest threat to this species is habitat destruction, particularly within its wintering range. Although hunting broad-winged hawks in the United States is now prohibited, it continues today on the wintering grounds in other countries.

The broad-winged hawk has, well, broad wings. The name is apt in the case of this bird. If I see one soaring high in the sky, even without the use of binoculars or a camera, I can quickly identify this bird by its broad wings. Also, when soaring, it appears the broadwing is lacking a neck. The head appears short and stocky.

The tail is also broad and has black and white bars. The large black bar at the end of the tail is thicker than the other black bars. Adult broad-winged hawks have dark trailing edges to the wings.

The broad-winged hawk is brown on the back, and has a brown head and a white underneath with copper-colored barring

across the chest and belly. Its yellow and black beak is also wide.

Broad-winged hawks range from 14-17 inches from beak to tail, whereas the more commonly seen red-tailed hawk ranges from 18-22 inches in length, a good deal larger.

According to the Cornell Lab of Ornithology, couples raise one brood each year. The female constructs the nest with assistance from the male. It is usually built in the lower portion of the canopy of a tree. The female lays one to five eggs (typically two to three) and incubates them for about a month. Nestlings fledge after five to six weeks.

Broad-winged hawks prey on small mammals, reptiles, amphibians, some insects and even other, smaller birds. They prefer to hunt on woodland edges near fields or clearings.

During summer breeding, broad-winged hawks inhabit the deciduous and mixed forests of the eastern United States. Their range runs along eastern Texas through Oklahoma, and extreme eastern Kansas, into Iowa north through Minnesota and into Canada. It populates most of the Atlantic and Gulf of Mexico states. However, in Florida, it only breeds in the Panhandle. It winters mostly in southern Mexico, Central America and the northern third of South America. There are some broadwings which winter in southeastern Louisiana and the southern tip of Florida. Some also winter in Cuba and the Caribbean Islands. Cuba also has a permanent population.