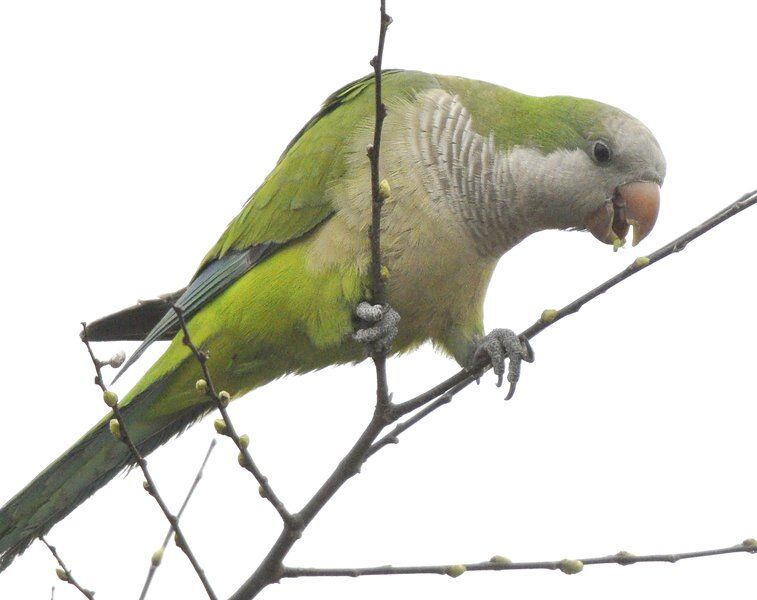 A monk parakeet eats a leaf bud from a tree. Note the thick yellowish-brown bill. 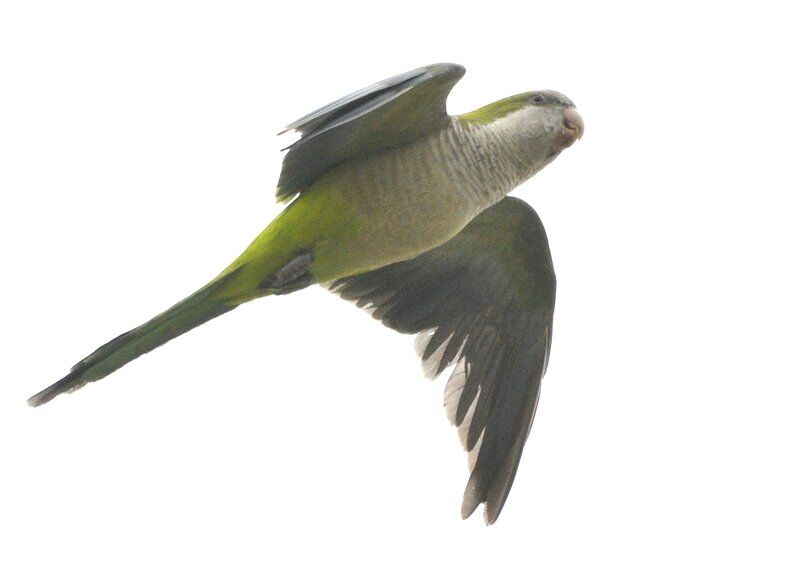 A monk parakeet flies near White Rock Lake in Dallas. Note thee gray face, neck and chest, as well as the buffy belly.

A monk parakeet eats a leaf bud from a tree. Note the thick yellowish-brown bill.

A monk parakeet flies near White Rock Lake in Dallas. Note thee gray face, neck and chest, as well as the buffy belly.

This week, I’m featuring a bird that you’re not likely to see in the Ada area. At least, not yet anyway.

However, if you’re in Dallas, specifically White Rock Lake, you may be fortunate enough to see and hear monk parakeets.

These birds, also known as Quaker parrots, have established quite a colony at the suburban reservoir.

How these birds, a South American species, ended up at White Rock Lake is a mystery. The colony quite possibly started from escaped birds.

They nest amongst an electrical substation at the lake, and don’t seem to cause trouble. In fact, there is a sign there which reads: “Monk Parakeet Habitat Coexisting with TU Electric. Habitat maintained in consultation with the Dallas Museum of Natural History and the Dallas County Audubon society.”

In North America, free-flying monk parakeets were first noted in the late 1960s.

I visited the lake during a trip to Dallas earlier this spring, specifically to see and watch the birds, a first for me.

While approaching the lake, I had my window down and heard one squawking as it flew by. I was quite happy to hear and see these parrots in the wild.

I’ve never visited a foreign land where wild parrots are prevalent, and I probably never will, so seeing some here in the States was pretty cool.

Monk parakeets are chunky parrots with long tails, and measure about 12 inches in length.

They are green above, and have gray faces, necks and chests. Their bellies are buffy, and, on their wings, the outer primaries and secondaries are blue.

They have thick, hooked bills which are yellowish-brown with rounded tips.

As I mentioned previously, these birds are native to South America -- Brazil and Argentina -- but there are isolated populations in many areas of the United States. In Texas, they are found mostly in urban areas, such as Dallas, Houston, Austin, San Antonio, etc.

At White Rock Lake, these birds visit feeders in the area. Safflower seed seems to be a favorite, according to residents there.

While these birds inhabit semiarid savannas in South America, they have adapted well to suburban and urban environments, particularly city parks, in the United States.

In Texas, according to the Cornell Lab, they prefer open environments with good visibility, building nests in groups of tall, sturdy structures with minimal understory vegetation.

At White Rock Lake, the birds nest in the electrical substation at the south end of the lake. Although they sometimes build individual nests, many nests -- made of sticks -- are are communal and are used for roosting as well.

The Cornell Lab reports that monk parakeets use and maintain these large stick compounds year-round, a behavior that may help to explain the ability of the birds to colonize areas with colder winters than in its region of origin.

- There is a Facebook page which concerns the birds in the DFW area: https://www.facebook.com/MonkParakeetsOfDFW.