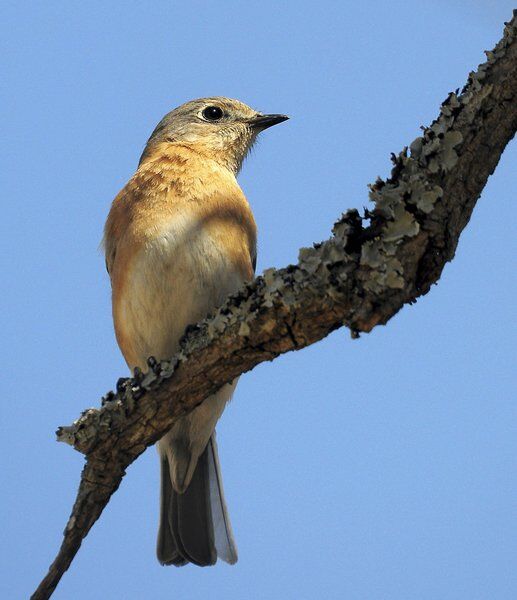 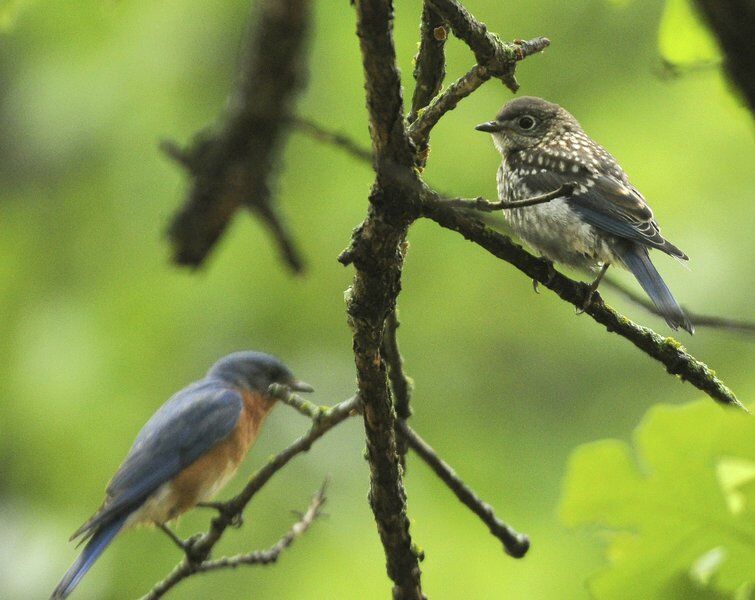 An immature eastern bluebird, above, perches on a tree branch while watching its father hunt for insects. Bluebird parents continue to feed their young until the young are capable of feeding themselves. 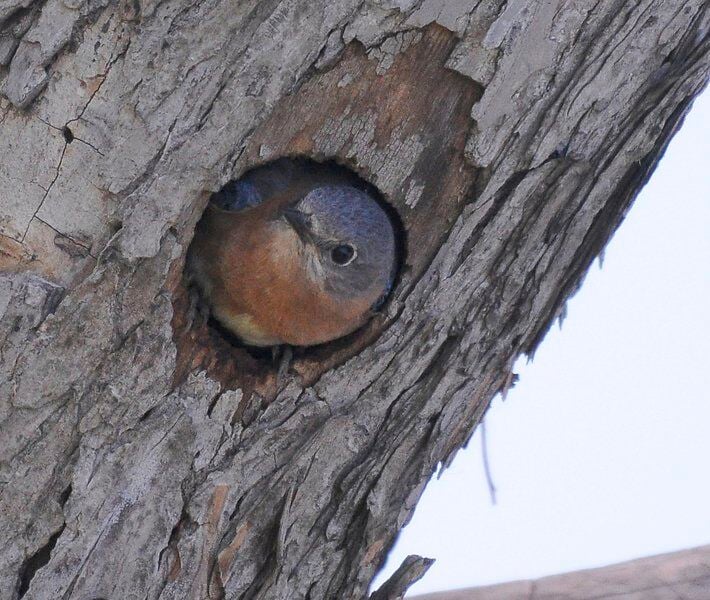 A male eastern bluebird looks out of a nesting hole. Bluebirds most often nest in vacant tree cavities created by woodpeckers. 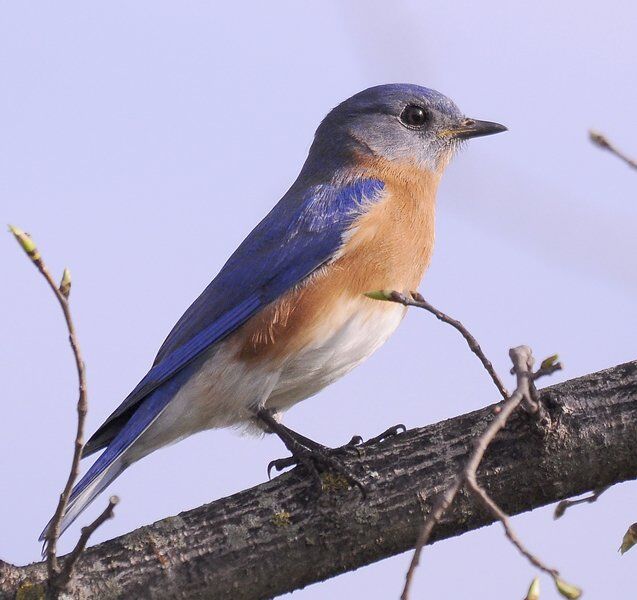 A male eastern bluebird perches on a tree branch. Note the brilliant royal blue above, and chestnut throat, chest and flanks.

An immature eastern bluebird, above, perches on a tree branch while watching its father hunt for insects. Bluebird parents continue to feed their young until the young are capable of feeding themselves.

A male eastern bluebird looks out of a nesting hole. Bluebirds most often nest in vacant tree cavities created by woodpeckers.

A male eastern bluebird perches on a tree branch. Note the brilliant royal blue above, and chestnut throat, chest and flanks.

This week’s featured creature is a common permanent resident in the Ada area.

However, the eastern bluebird’s abundance doesn’t take away from the fact that it is a beautiful songbird. This honor belongs mostly to males as they are more colorful than females, a trait typical of most birds.

However, although females’ colors are more subdued, they have an elegant look in their own right.

The eastern bluebird is a thrush, related to birds such as robins and, well, thrushes.

Bluebirds do not often visit backyard feeders unless meal worms are offered. They especially enjoy mealworms which are alive. Although they occasionally show up at feeders -- mostly for mealworms, fruit, suet and peanut hearts -- the best way to attract bluebirds to a yard, in my opinion, is to offer a water feature. And that water feature can be a simple bird bath. Bird baths and other water features will often attract birds that would otherwise never visit feeders.

In a previous column, I mentioned that female red-winged blackbirds give novice birders fits as they look nothing like their male counterparts.

Well, the same can be said for juvenile eastern bluebirds. They don’t resemble their parents much, but they have a spectacular appearance in their own right. But more on that in description.

Immature birds look quite a bit different than their parents, and to the unfamiliar eye, appear to be a different species altogether. They are darker gray above than females, and have quite a bit of spotting over their chests and backs. There is also variable blue coloring on their wings and tails.

Eastern bluebirds can be found all over Oklahoma. Their permanent range extends from the Great Plains states to the East Coast, covering the southeastern United States. Some birds migrate west a few hundred miles, and their breeding range extends just up into Canada.

I frequently see eastern bluebirds around my house, which is no surprise as the vegetation is among their preferred habitat, trees with little understory and sparse ground cover. But perhaps the most preferred habitat is open country with scattered trees.

Eastern bluebirds most often perch somewhat low to the ground, then fly out to catch prey, which is mostly insects. However, they sometimes perch a little higher, such as on electric lines.

Once an insect is spotted, a bluebird usually flies down to the ground to grab it up, then flies back to its perch. During my observations, small caterpillars were the most popular bluebird food. However, the Cornell Lab of Ornithology reports that beetles, grasshoppers, crickets and spiders are also taken. The Cornell Lab also reports that, in fall and winter, bluebirds eat large amounts of fruit including mistletoe, sumac, blueberries, black cherry, tupelo, currants, wild holly, dogwood berries, hackberries, honeysuckle, bay, pokeweed and juniper berries.

The Cornell Lab reports that males attract females to the nesting cavities with a display in which he carries bits of nesting material into and out of the nest. Once a female enters the nest hole with him, the pair bond is typically established and often remains intact for several seasons.

The Lab also reports that boxes and tree cavities where bluebirds nest are a hot commodity among other birds that require holes for nesting. Male bluebirds will attack other species they deem a threat, including house sparrows, European starlings, tree swallows, great crested flycatchers, Carolina chickadees, and brown-headed nuthatches, as well as non-cavity nesters such as robins, blue jays, mockingbirds and cowbirds, according to the Lab.

However, I’ve seen tree cavity nesters, like Carolina chickadees, nesting in nearby trees, and they seemed to live in peace with bluebirds. I guess as long as the other birds aren’t in competition with a bluebird pair’s preferred residence, it’s okay.

Females lay two to seven eggs which are incubated for 11 to 19 days, according to the Cornell Lab. Young are ready to leave the nest at about three weeks of age. However, I’ve witnessed adult eastern bluebirds assisting their young with hunting and feeding for several weeks after the young have left the nest.

Nest boxes for eastern bluebirds should be built to exact specifications. This lessens the likelihood of other bird species moving in and taking over. They should also be erected well before the breeding season.

For more information on building a bluebird house, visit www.nestwatch.org/ and search for eastern bluebird. You can also visit the North American Bluebird Society at http://www.nabluebirdsociety.org/.

- Bluebirds can sight their preferred prey from 60 feet or more away, according to ornithologists.

- Eastern bluebird populations were once in great decline do to human behavior -- introduced bird species, habitat loss and pesticides, according to the American Bird Conservancy. However, also do to human behavior, they have made a great comeback. The comeback was do in large part to the offering of artificial nest boxes.