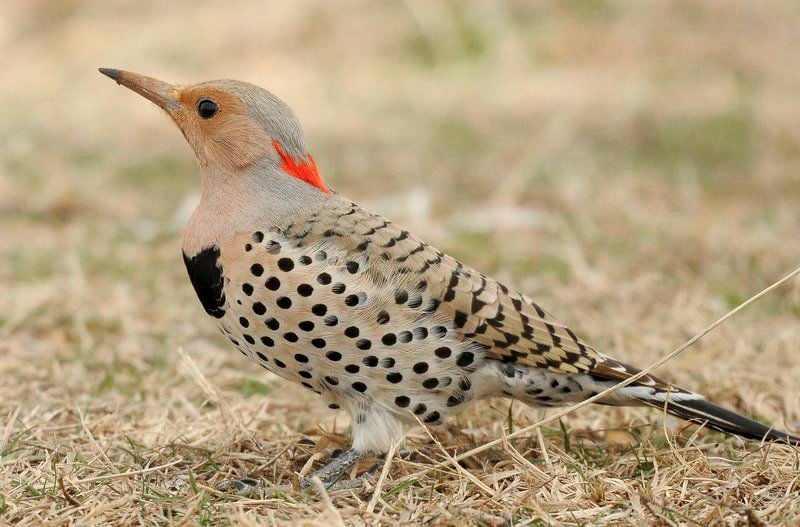 A female “yellow shafted” northern flicker pauses as she digs in the ground for food, presumably ants. Note the back bib on the front and red coloring on the nape of the neck. Males look similar but have black teardrop-shaped coloring near the beak, which resembles a moustache. 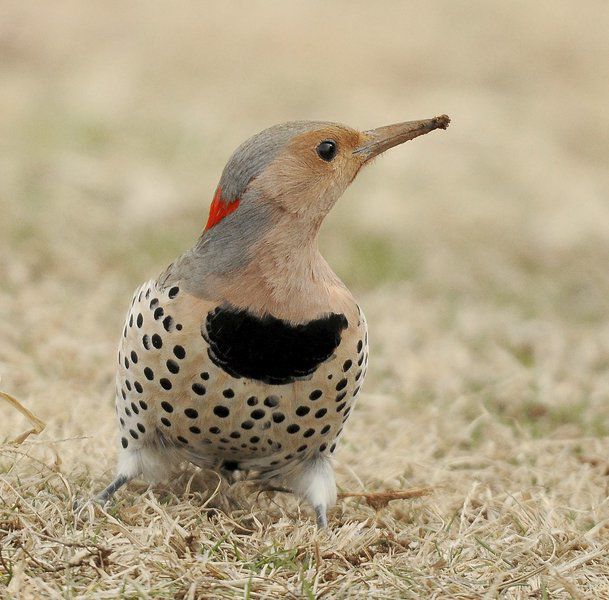 A female “yellow shafted” northern flicker takes a break from searching for food to look around for predators. In this photo, the black crescent that all northern flickers have is clearly visible. 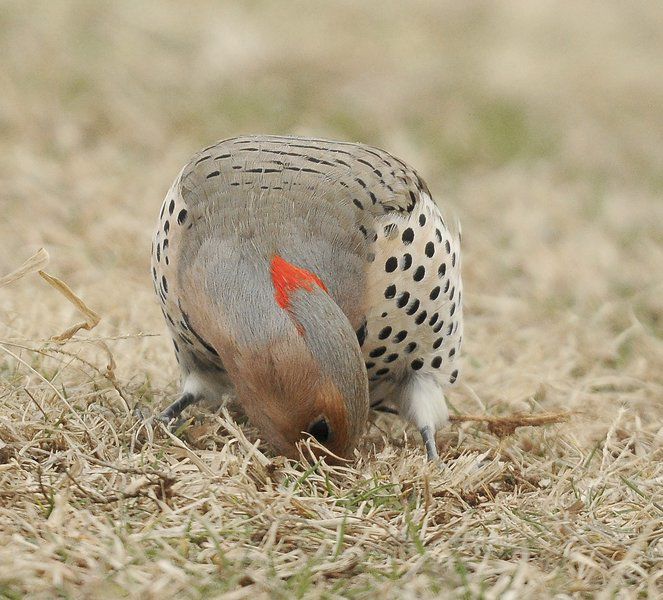 A northern flicker reaches deep into the ground to get food, such as ants and termites.

A female “yellow shafted” northern flicker pauses as she digs in the ground for food, presumably ants. Note the back bib on the front and red coloring on the nape of the neck. Males look similar but have black teardrop-shaped coloring near the beak, which resembles a moustache.

A female “yellow shafted” northern flicker takes a break from searching for food to look around for predators. In this photo, the black crescent that all northern flickers have is clearly visible.

A northern flicker reaches deep into the ground to get food, such as ants and termites.

Also, flickers don’t always act like typical woodpeckers. They often feed on the ground and when they fly to a tree, they will often perch on a horizontal branch rather than the trunk.

Now, as a child, I knew the northern flicker as a winter bird, but that’s probably because I lived right near the bird’s southern border in Texas.

And, although they can be found all over Oklahoma year round, they are much more common in winter, as they are partially migratory. The birds will be less common once the breeding season arrives and they establish territories.

Flickers have long, barbed tongues. They use those tongues to retrieve insects from hard-to-reach places.

When not in use, the tongues retract like a measuring tape back into the head and around the skull. This acts as shock absorption when the bird is hammering into something. However, woodpeckers have many physical safeguards to protect their brains.

The northern flicker is a large bird at almost 13 inches in length. It’s the second largest woodpecker in North America, next to the pileated woodpecker. The ivory-billed woodpecker was larger than both, but it is believed to now be extinct.

“Yellow-shafted” northern flickers are sexually dimorphic, but not by much.

Males have a medium-gray head crown and nape, along with a black malar stripe (moustache). Females lack the malar stripe and have a lighter gray nape and head crown.

Both male and female have red coloring on the nape, spotted bellies and black crescents on their breasts. Males and females have yellow shafts on their flight and tail feathers.

With the “red-shafted” northern flicker, a bird of the western 40% of the country, the malar stripes on males are red, and they have red shafts on flight and tail feathers. Their heads are also mostly gray.

Although their range does not include Oklahoma, it would not be impossible to see a red-shafted version here. And where the two subspecies overlap, they breed with each other and the resulting offspring usually resemble a combination of both, according to National Geographic.

The northern flicker has a permanent range that covers almost all of the United States, except for portions of West Texas, New Mexico and Southern California. In winter, however, the northern flicker can be found all over the country. In summer, its breeding range goes well up into Canada and Alaska.

As I mentioned previously, flickers often feed on the ground. But not always.

When they do feed on the ground, they prefer bare soil or short grass. They don’t want to be surprised by a predator while digging around in tall grass.

They will use their strong bills to hammer into the ground in search of ants and, to a lesser extent, other insects. In fact, the flicker in my photo was digging for food. Check out the dirt on her bill.

The Cornell Lab of Ornithology reports that northern flickers most often excavate a hole in a dead tree and, unlike most woodpeckers, will reuse a nesting cavity from the year before, including cavities created by other species.

The female lays from five to eight eggs, which hatch about 12 days after. Nestlings are ready to leave after about a month.

• In Alabama, where the northern flicker is the state bird, residents call them “yellowhammers.”

• Sadly, the population of yellow-shafted flickers is declining. Habitat loss and use of pesticides on lawns and other areas is believed to be the cause.

• Flickers will make a home in manmade nest boxes. However, the boxes should be put up well before the breeding season. For more information, visit nestwatch.org and search for northern flicker. To download nest box building plans, visit https://nestwatch.org/wp-content/themes/nestwatch/birdhouses/northern-flicker.pdf.