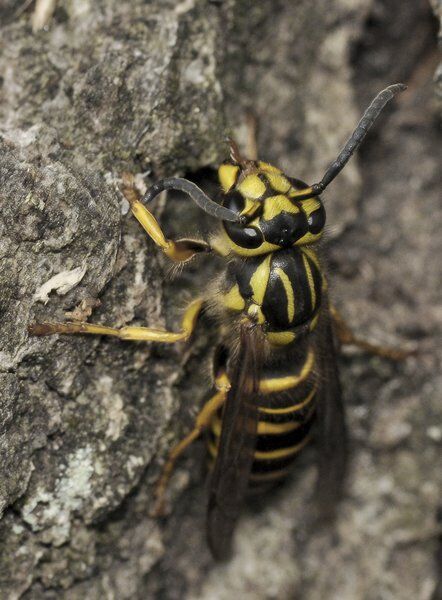 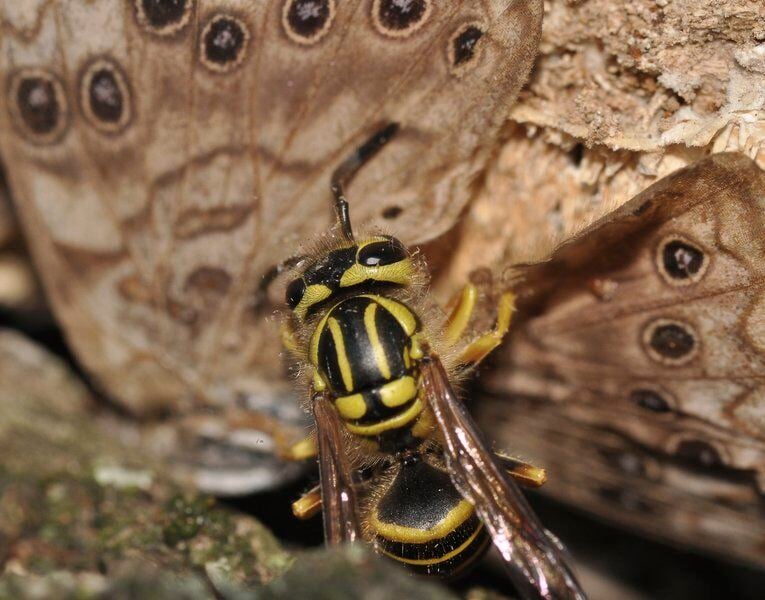 Randy Mitchell | For The Ada NewsA southern yellowjacket captures and kills a hackberry emperor butterfly. Yellowjackets usually prey on live insects, but in late summer and fall, when food is scarce, they will seek out other food sources such as carrion and garbage as well.

Randy Mitchell | For The Ada NewsA southern yellowjacket captures and kills a hackberry emperor butterfly. Yellowjackets usually prey on live insects, but in late summer and fall, when food is scarce, they will seek out other food sources such as carrion and garbage as well.

These wasps are notorious for their aggressive nature and tendency to sting, and are able to do so multiple times.

When these wasps are aggressive, often it occurs when a nest is disturbed, or in late summer and fall when populations are high, and food supply is low, which increases their contact with humans.

However, I’ve only had a problem with them on one occasion during my lifetime.

I disturbed a nest once and paid for it dearly. I was a kid, and, on my grandmother’s farm was a pile of dirt which had become overgrown with giant ragweed.

Well I had plans to play on that dirt pile, so I began pulling out the ragweed stalks, which is easy to do by the way. I was unaware that there was a large yellowjacket nest in the dirt pile, but I quickly found out.

I received multiple stings before running off, and quickly learned about

Yellowjackets are social wasps and build nests underground, most of the time. Entomologists at Oklahoma State University report yellowjackets “often have guards at their nest entrances, and the colony can easily be disturbed by rapid movement and vibrations near the nest. For this reason, one will almost certainly be stung if a lawn mower or trimmer is used near a yellowjacket nest.”

As mentioned previously, in late summer and fall, yellowjackets become aggressive as food sources are diminishing. One could say they get “hangry.” Starvation makes them angry and aggressive as they work hard to find food.

Workers eventually die, but pregnant queens usually survive the winter. But more on that in life cycle.

Queens resemble workers somewhat, but are about twice the size and have orange-colored abdomens.

Yellowjackets usually prey on live insects (see photo), but some species also scavenge for protein and sugars at carrion, garbage, picnic, and recreation sites; meat-packing plants; areas where fruit has fallen from trees; and food-processing plants, according to OSU. Their scavenging habit, the aggressiveness of individual workers, and the peak population levels in the fall make yellowjackets a serious stinging hazard at these feeding sites.

In one of my photos, you’ll notice the yellowjacket is attacking a butterfly. While subduing the victim, the wasp clipped off the butterfly’s wings. I found it brutal, but a smart way to keep the insect prey from flying off.

Yellowjackets can be found in just about all types of habitats, from woods to urban areas. OSU entomologists report that most yellowjackets build nests in underground or enclosed sites such as wall voids, attics, and inside hollow logs. By late summer and fall, those nests can contain thousands of adults.

Southern yellowjackets are found over most of Oklahoma, from about

Altus to Woodward and everywhere east. Their range extends from Texas to Minnesota and all states east, as well as deep into Mexico.

Once a pregnant queen emerges from overwintering, she builds a burrow in the ground, or utilizes a hollow log or crack in rocks or a building, then lays eggs that will later become her workers. The workers will use chewed vegetation to make combs for future larvae and the nest will increase substantially over the warmer months. Workers spend most of their time collecting food and nest-building, while queens spend most of their time laying eggs.