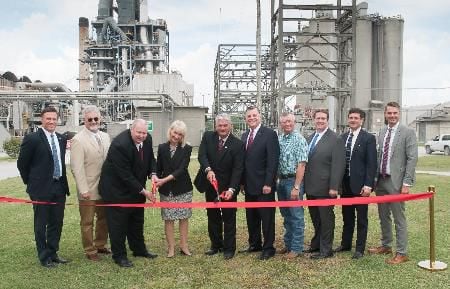 Dignitaries cut a commemorative ribbon during ceremonies marking the completion of upgrades to the Holcim US cement plant Thursday in Ada. 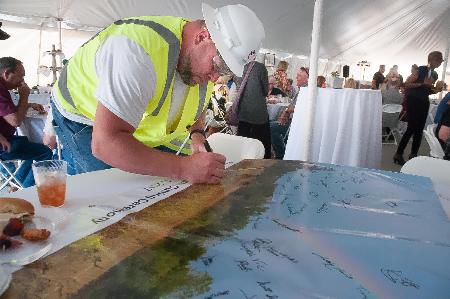 Dignitaries cut a commemorative ribbon during ceremonies marking the completion of upgrades to the Holcim US cement plant Thursday in Ada.

Ada celebrated a new chapter in the history of the Holcim US cement plant Thursday.

The plant, which is a member of the LafargeHolcim group, recently completed a three-year, $100 million modernization project that included building a new kiln line. The project will boost the plant’s manufacturing capacity by 20 percent, allowing it to produce about 682,000 metric tons of cement and 620,000 metric tons of clinker — a key ingredient in making cement — each year.

The upgrades will also allow the plant to meet the environmental regulations known as the National Emissions Standards for Hazardous Air Pollutants and the New Source Performance Standards, said plant manager Mike Langan.

“NESHAP is one performance standard that’s fairly restrictive,” he said. “NSPS, or New Source Performance Standards, are the most restrictive environmental regulations in our industry. And this plant meets that. So, much cleaner environmentally.”

The upgrades made it possible for the plant to increase its use of fuel derived from scrap tires, replacing at least 20 percent of the fossil fuel used in the new kiln line. That change will make the operation cleaner and more efficient, supporting LafargeHolcim’s sustainable-development goals.

About 100 people, including plant employees as well as state and local officials, turned out for the open house and ribbon-cutting ceremony. After greeting other guests, they settled into their seats to listen to comments from a group of speakers.

John Stull, CEO of US Cement, said the recent upgrades will put the plant in a better position to serve its customers.

“By modernizing the plant, we have worked to transform it into a competitive state-of-the-art facility that will allow us to meet the growing needs of our customers and remain a strong partner to the community for the foreseeable future,” he said.

Stull said the plant maintained about 120 permanent jobs throughout the three-year project, in addition to more than 380 contractors. He added that the project required more than 900,000 man hours and there were no serious injuries.

“I want to commend you for that,” he said. “And I know you will all continue to focus on everyone’s safety, which is our core value, for the benefit of everyone.”

State Sen. Greg McCortney focused on the plant’s long history in Ada. He said he grew up in the plant’s shadow and he remembered trying to be the first to see it when his family returned home after an out-of-town trip.

“To play just the smallest part in keeping this here and this incredible expansion is an incredible honor for me as an Ada kid, to be a part of it,” he said.

For his part, state Rep. Todd Thomsen praised LafargeHolcim officials for investing in Ada and in Oklahoma.

“I want to thank you so much for this incredible investment that you made into the state,” he said. “We all owe you gratitude for keeping this plant alive, for keeping this active so that the men and women here have jobs.”

Thomsen also said he thought the company was lucky to have a plant in Ada because in his opinion, the community reflects the best of Oklahoma.

The audience also heard from U.S. Rep. Tom Cole, who noted that the plant has been part of Ada for more than 100 years.

“It’s provided jobs and opportunity in addition to a quality product, because it’s gone into so many essential infrastructure projects in this area of the country,” he said.

As part of the celebration, plant officials received a special plaque from Oklahoma Secretary of Commerce and Tourism Deby Snodgrass. McCortney and Thomsen presented Langan with a commendation from the Oklahoma Legislature, and Ada Mayor Guy Sewell read a proclamation designating Thursday as “Holcim Ada Day.”