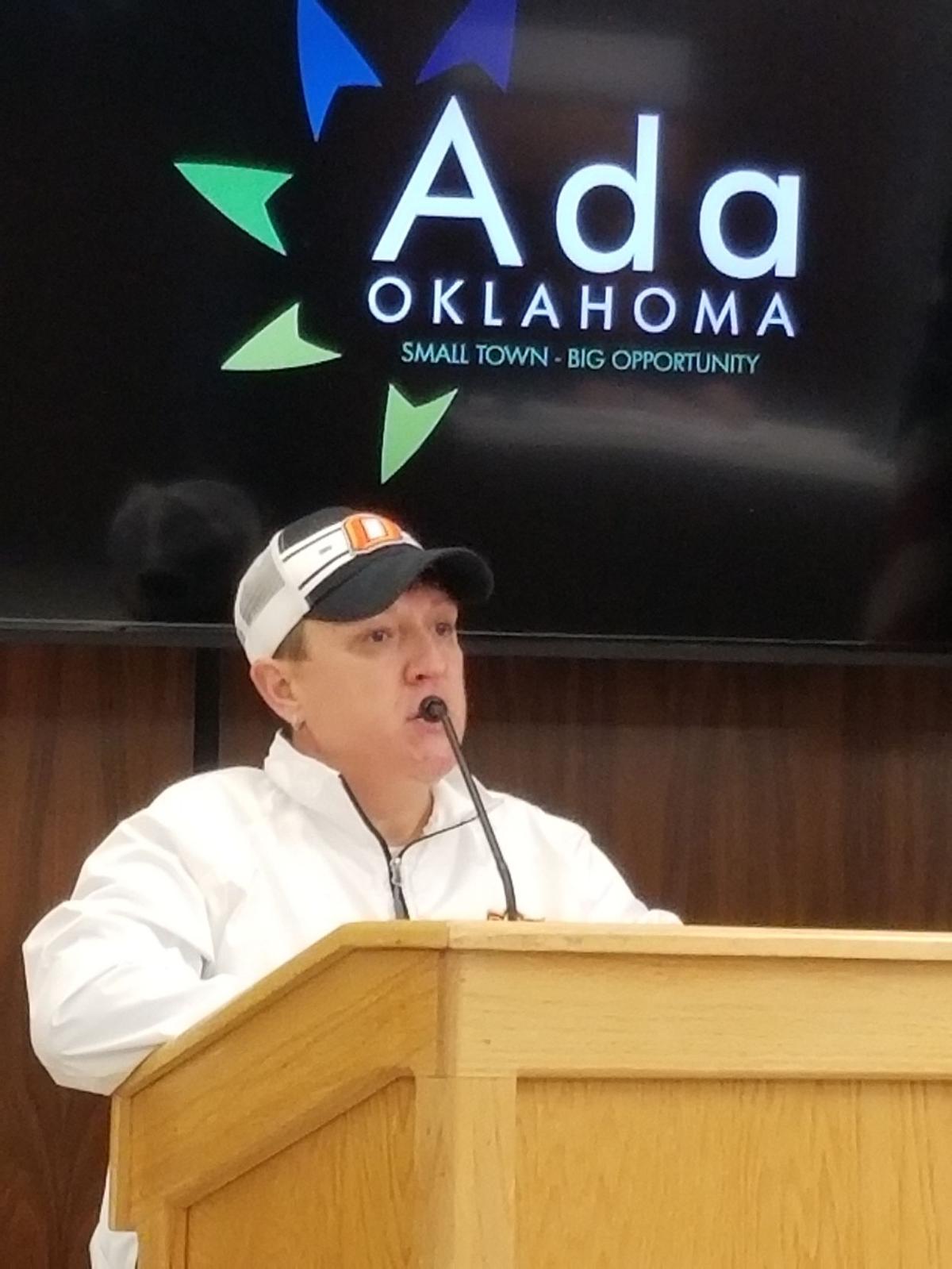 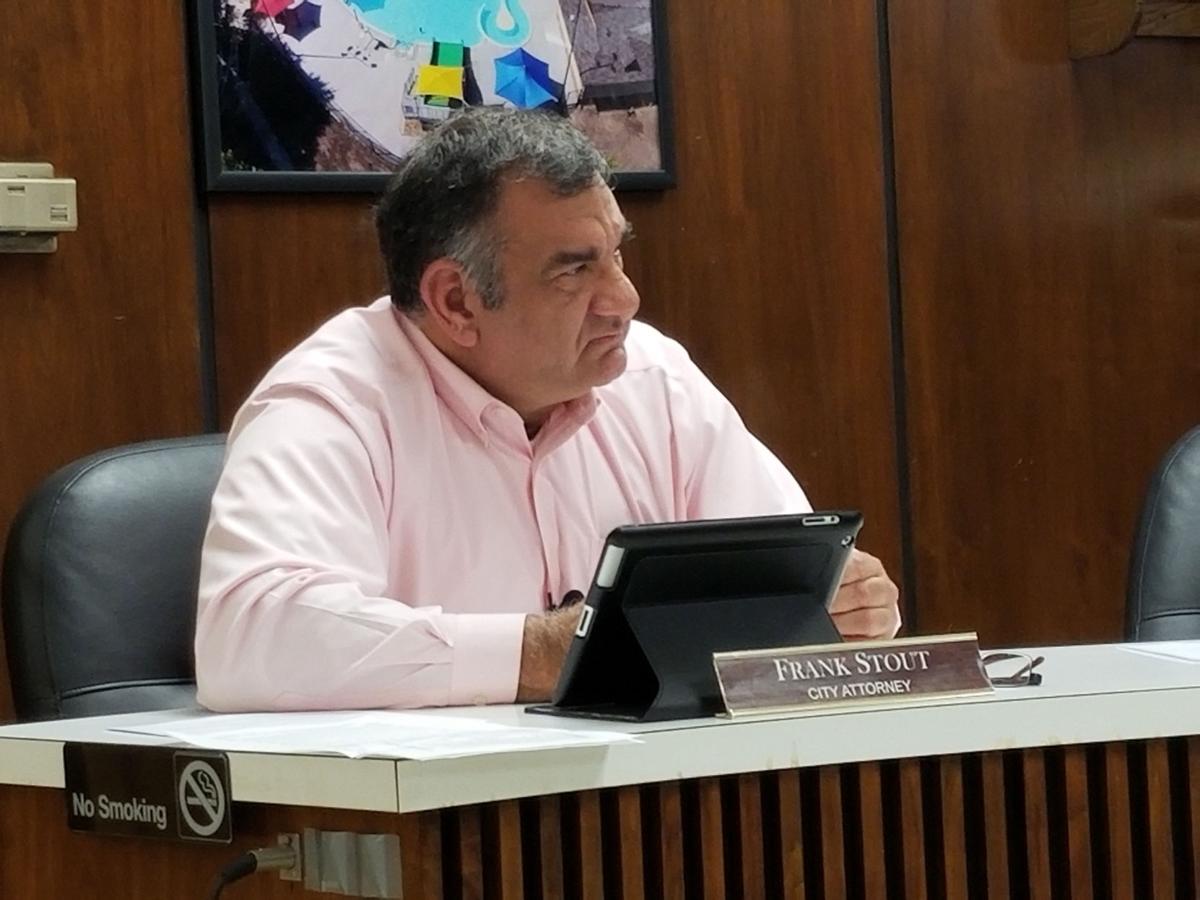 Ada’s legal advisor and a member of Fraternal Order of Police Lodge 111 clashed Monday during a discussion of the city’s contract negotiations with the police and fire unions.

During his explanation of the negotiating process, City Attorney Frank Stout said police officers and firefighters are working under their contract for fiscal year 2016-17 while contract negotiations for fiscal year 2017-18 continue. He said the city’s offer includes a 2 percent salary increase because the city has adjusted the entire salary scale for police and fire, but that increase would be in lieu of a $400 end-of-year bonus that non-union employees are set to receive.

“Now we could have said, “We’ll give you 1 percent plus the stipend — a $400 stipend,’” he said. “And if any of the union members said, ‘It’s a better deal,’ they don’t really understand. Because the 2 percent is a permanent raise and next year, you’re going to get the 2 percent. The $400 is a one-time deal, and it’s not guaranteed ever.”

The city’s offer also included a proposal to reduce police officers’ and firefighters’ comp time from 120 hours to 90 hours as a way to lessen the city’s unfunded liability in several areas, including comp time.

The unions have not voted on the proposal yet, but they are free to reject it if they wish, Stout said. He said the unions could decide to seek arbitration, in which case an outside arbitrator would pick the best salary offer.

Kathi Johnston, who is a member of the FOP lodge but is not part of the negotiating team, said the union was forced to sign the contract with the 2 percent salary increase but not the bonus. She added that the union approved the contract last week, but Stout later amended it.

“We gave our signed copy to Mr. Stout and whenever we got the other four or five copies back, some stuff had been added in,” she said. “We read those contracts word for word, every single word, and stuff had been added in. So we voted at our meeting to suspend negotiations and everything and say, ‘We’re not going to do it. We’re not going to sign … and then get copies back and have words added in by Mr. Stout.”

Stout fired back, saying most of Johnston’s comments were untrue.

“That’s why we have negotiations,” he said. “We didn’t force them to sign anything. They know exactly how to do it, and Kathi knows how to do it.”

Johnston wanted to know which statements were untrue, and Stout said about 90 percent.

Then Johnston said, “Tell me what’s not true. Because you told your city council members that we did not sign that contract, and you know we signed that contract last week and you added stuff in it.

“So, I mean, you can sit there and say you’re not lying or that I’m lying, but is that a fact, Frank?”

Stout said, “You’re lying, Kathi,” which prompted an outcry from the audience.

The Ada News interviewed Stout and Assistant City Manager Angie Dean on Wednesday about the city’s contract offer and Stout’s exchange with Johnston. Stout participated in the interview via speakerphone because he was out of town.

Stout said Johnston’s comment that the city forced the police union to accept the contract containing the 2 percent salary increase was untrue because the city cannot compel unions to sign anything.

“They’re never forced to accept anything, number one,” he said. “The statute allows them to go to arbitration.”

Stout also challenged the assertion that he added more information to the contract after the unions approved it.

Stout said he printed a copy of the original contract and gave it to a union representative who had dropped by to pick it up. After the representative left, Stout realized he had forgotten to add a sentence saying that union members would not receive the $400 bonus — which the unions already understood.

“I called the president and said, ‘Hey, you can take that (the original) and talk about it, but when you come back to sign the ones we’re going to submit — because they’ve got to sign four. We’ve got to have four signed copies — that sentence will be in there, so that’ll be in there to sign. So tell them,’” Stout said. “When he came back and had the one that I gave him and he had signed it, we talked about it, and I said, “I told you that this sentence is going to be in here, so this one’s no good. So here are the four with the sentence in it. Take them and read them and just bring them back whenever you’re ready to sign it.’”

Dean said Stout reached out to Johnston on Tuesday to propose a meeting where they could discuss how Monday’s meeting could have been handled better.

The News also contacted Johnston, who said she stood behind everything she said at Monday’s meeting. She said the city could not legally compel the union to sign anything, but the city recently issued an ultimatum: Either accept the $400 stipend, or take the 2 percent pay increase without the stipend and lose 30 hours of comp time.

“The city negotiated with the union that they could not have both because there was not enough funding available,” Bratcher said in an email to an Ada News reporter.

She said a union representative asked that police be excluded from the city council’s Dec. 4 agenda, which included a vote on the stipend, so the union could vote on the contract the following week.

“Two individuals — the union president and another member — took the signed copies that we voted on and agreed on to Mr. Stout,” Johnston said. “They were handed four other copies. The four copies had been amended, but they did not realize that right there at the very start.

Johnston said when the union president discovered the change, the union decided to suspend negotiations on the grounds that the city was acting in bad faith.

“We are absolutely not going to have that in the contract,” she said. “Number one, that doesn’t belong in the contract. That would need to be an MOU (memorandum of understanding) or something separate that we would sign.”

Johnston said she learned through a third party that Stout wanted to meet with her, a union member and Johnston’s captain to apologize for his actions. But she said she did not think it was appropriate to meet with Stout since the union president, who is out of town for training, would not be present.

Eric Swanson can be contacted by email at eswanson@theadanews.com.