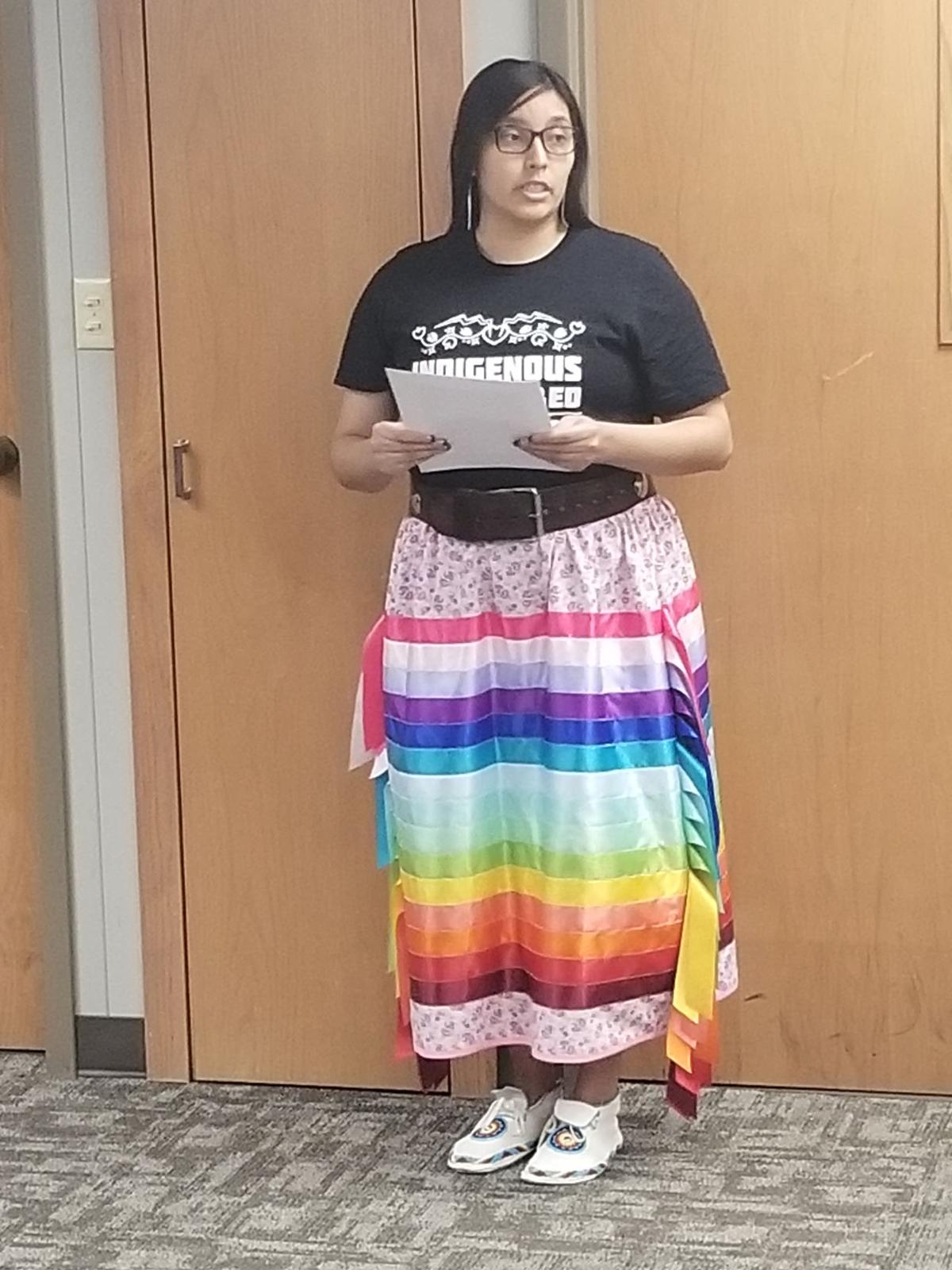 Briana Mason shares a short history of indigenous people in Ada with the Ada City Council on Monday. The council voted unanimously to observe Indigenous Peoples Day on the second Monday of October, instead of Columbus Day. 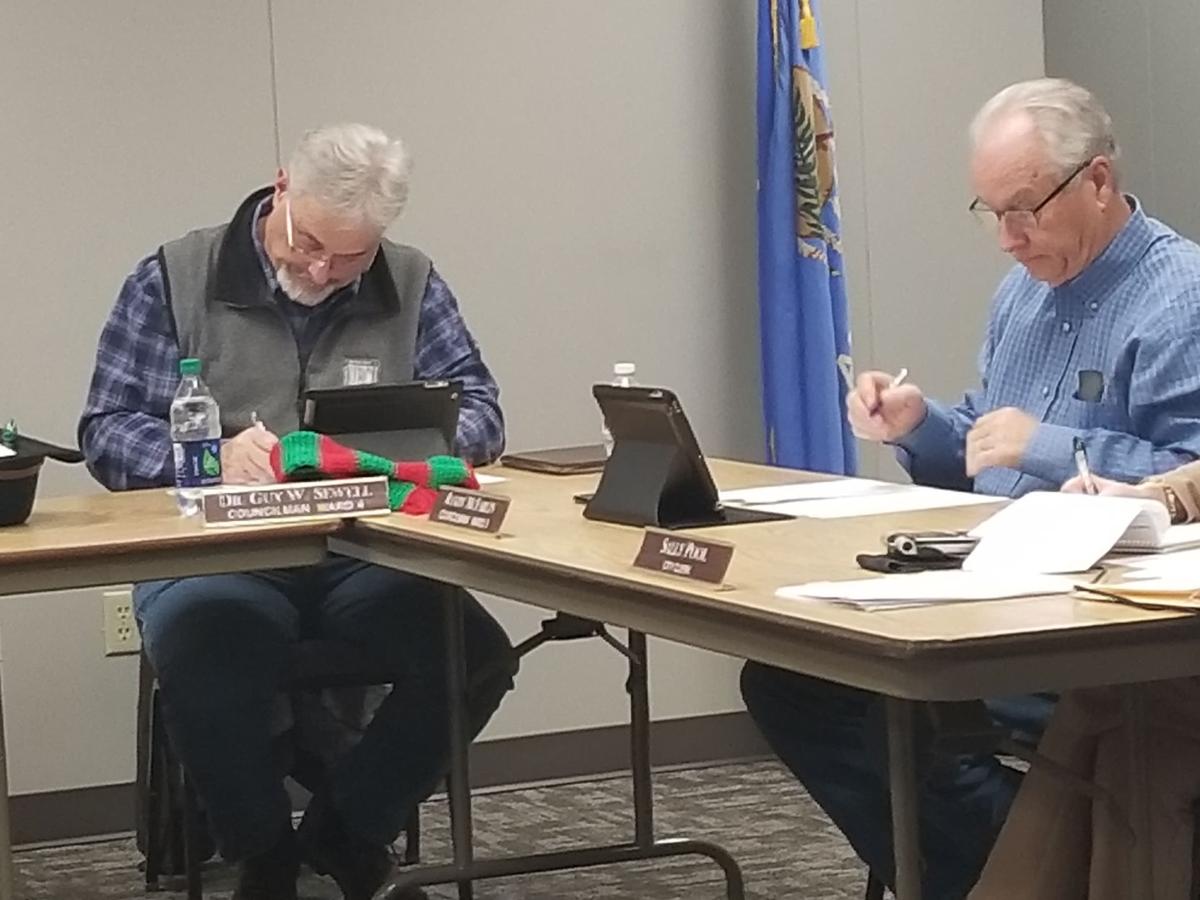 From the left, Ada City Councilmen Guy Sewell and Randy McFarlin listen to a presentation about the history of indigenous people in the Ada area.

Briana Mason shares a short history of indigenous people in Ada with the Ada City Council on Monday. The council voted unanimously to observe Indigenous Peoples Day on the second Monday of October, instead of Columbus Day.

From the left, Ada City Councilmen Guy Sewell and Randy McFarlin listen to a presentation about the history of indigenous people in the Ada area.

Ada is joining a growing list of cities, states and universities that have replaced Columbus Day with a new holiday recognizing Native Americans’ history and culture.

The Ada City Council voted 5-0 Monday to rename the second Monday in October as Indigenous Peoples Day instead of Columbus Day. The day will continue to be a paid holiday for regular, full-time and hourly city employees.

The city’s Multiculturalism Committee, which advises the council and the city manager on diversity-related issues, recommended making the switch to Indigenous Peoples Day.

“We talked about this for a while, and I think it’s a good idea,” said Committee Chairwoman Christine Pappas.

Pappas was joined by Briana Mason, a recent graduate of East Central University who recounted a short history of Native Americans in Ada.

Mason said that history began with the Wichitas, a group of Southern Plains indigenous tribes, and their successors, the Chickasaw Nation. She said the Nation played a key role in the development and success of East Central University and Ada as a whole.

As an example, Mason told the story of Chickasaw citizen Daniel Hays, who donated the land where ECU was built.

When Hays came of age, he received a 320-acre allotment of land in southeast Ada, where the Hays Addition is now, Mason said. He kept only 20 acres for himself, and his successful agricultural business made it possible for him to acquire more land. He spent part of his life as a laborer and earning 37 cents a day, then spent the rest of his life selling real estate.

Mason said before ECU was established, local officials were trying to decide whether to build a school or a prison in the community. She said the city and the Chickasaw Nation submitted a bid for a school in Ada, but they hadn’t decided where the school would be located.

“Daniel Hays solved the dilemma by donating a portion of his allotment for the school to be built, only asking that he and his wife could continue to reside in their home that was within the property,” Mason said. “J.I. McCauley was on the committee that chose to build a college instead of a prison because the committee believed a school would benefit the community more than would a prison.

“In summary, the history of indigenous people in Ada is long and consequential. It is with these facts in mind that we ask the Ada City Council to officially recognize Indigenous Peoples’ Day.”

An alternative to Columbus Day

More than a century ago, Colorado became the first state to designate Columbus Day as a state holiday, according to the Pew Research Center. The organization said the designation was largely the result of efforts by Angelo Noce, a first-generation Italian immigrant living in Denver.

The day was widely recognized as a celebration of Italian-American heritage, and it became a federal holiday in 1937, according to the Pew Research Center. The holiday was moved from Oct. 12 to the second Monday in October in 1971.

More recently, Native American groups and other critics have cited Christopher Columbus’ mistreatment of Native Americans and his role in initiating European settlement of this country, according to the research center. Those critics have urged cities and states to abandon Columbus Day in favor of a holiday honoring North America’s original inhabitants.

Several cities and states now observe Indigenous Peoples Day or its equivalent instead of Columbus Day.

Earlier this year, Oklahoma Gov. Kevin Stitt signed a bill that moved the state’s Native American Day from the third Monday in November to the second Monday in October, which coincides with Columbus Day.

Eric Swanson can be contacted by email at eswanson@theadanews.com.